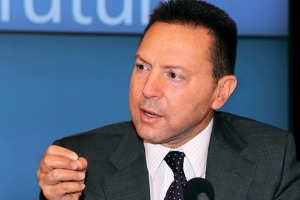 Greek finance minister Yannis Stournaras attacked the Troika for its austerity prescriptions, saying a primary budget surplus will be announced soon and will be much larger than expected, EURACTIV Greece reports.

Stournaras said the budget surplus would be a “a very very big surprise”, slamming Greece‘s international lenders for the forecasts they made from September 2013. At that time, the Troika asked for additional austerity measures to the tune of €3 billion.

“If I had accepted this [forecast], it would have been a great disaster”, he said.

“The Troika is stuck, it was stuck, because now I hope that with the new elements in their mind will somehow adjust to the reality”, he added.

Stournaras was speaking at a conference in Athens called "Oser la Democratie" (Dare Democracy), organised by the French weekly magazine Le Nouvel Observateur in collaboration with the Greek newspaper Kathimerini.

The two-day conference (6-7 February) gathered Greek and international politicians and experts who analysed the current situation and trends in the EU ahead of the crucial European election in May.

The Greek prime minister, Antonis Samaras, said the European Union was “looking for its own balance” and stressed that freedom and justice were the core ingredients of democracy.

Regarding his own country, he noted that Athens was recovering because it believed in Europe.

"The country is finding its path again, it is entering growth, and we achieved this because we believed in Europe, we did not believe in the detractors of extremism and populism," he said, adding that the Greek government managed to achieve the greatest fiscal health the country had ever seen.

Some Greek people do adhere to Nazi principles, the Greek PM continued. He was referring to two recent opinion polls which showed the neo-Nazi Golden Dawn party, which has a Swastika-like emblem and believes in ridding Greece of the "stench" of immigrants, would get 8.9 to 10.3% of the vote if elections were held now.

According to Samaras, disenchanted voters are merely angry about unemployment.

Addressing the conference, Massimo D'Alema, the former prime minister and minister of foreign affairs of Italy, pointed to the lack of trust in the EU among the public.

“A piece of research shows that if the situation does not change, in 2018 the trust in the European Union on the part of the countries of northern Europe will be only 1.3% and in the southern less than 1%. What is needed is a radical political change”, he stressed, adding that inequality and unemployment in Europe have gone beyond all bounds.

He also said that in a constantly changing world Europe has no alternative than to unite.

“Our future will be brighter and we will be strong only if we are together," said the Italian official.

Internal Market and Services Commissioner Michel Barnier talked about the importance of attracting EU citizens’ interest by taking initiatives in areas such as industrial competitiveness, social and tax base, education and research.

“We have learnt from the crisis. This will not be business as usual”, he assured.

Barnier said the EU should now focus on growth as a response to “extremism”, something that can only be achieved with “less regulation and more policy”.

Four years after the start of Europe's debt crisis, the economic and financial committee of the European Parliament has opened an investigation into the role of the Troika – made up of the European Commission, the European Central Bank (ECB) and the International Monetary Fund (IMF) – in the debt crisis.

The Parliament probe aims to shed light over the Troika’s handling of the crisis, with a view to strengthening its democratic legitimacy and the involvement of the European Parliament in its work.