Greens and Liberals hold key to form next German government

By Alexandra Brzozowski and Oliver Noyan | EURACTIV.com and EURACTIV.de 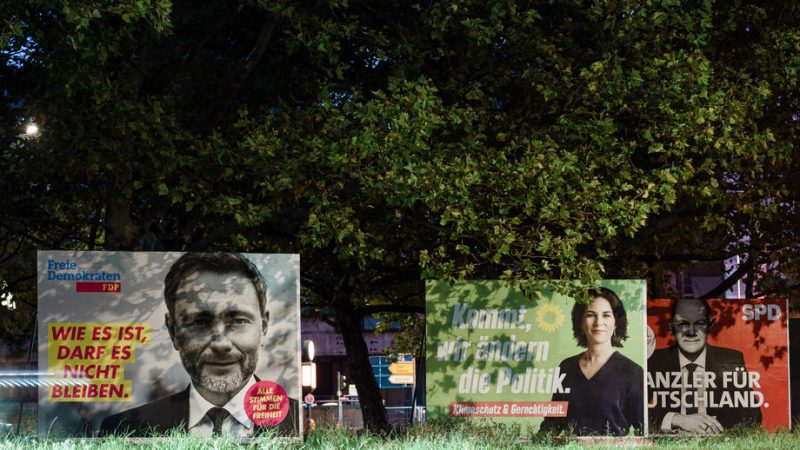 Both Conservatives and Social Democrats will vie for the Greens and Liberals, the kingmakers, to join their coalition camp. [EPA-EFE/CLEMENS BILAN]

Following Sunday’s federal election, the most likely outcome for the new German Bundestag is one of two coalitions: a Social Democrat-led ‘traffic light’-coalition or a Conservative-led ‘Jamaica’-coalition. Both camps will now try to win over kingmakers, the Greens and Liberals, to secure a stable majority.

The SPD and the CDU, who ended up almost neck and neck, explicitly ruled out a continuation of their joint grand coalition and announced their claim to lead the next German government. Both will need a third partner to do so.

A ‘red-red-green’ coalition between the SPD, Greens, and Die Linke looks unlikely, with the latter falling short of winning enough seats.

CDU’s Armin Laschet said his party would “do everything in our power to form a federal government under the leadership of the CDU/CSU because Germany now needs a coalition for the future that will modernise Germany”. He added that “the chancellor will be the one who manages to unite opposites.”

SPD rival Olaf Scholz, in turn, said in Berlin that one “can conclude from the result that we have a mandate to say we want to form the next government.” 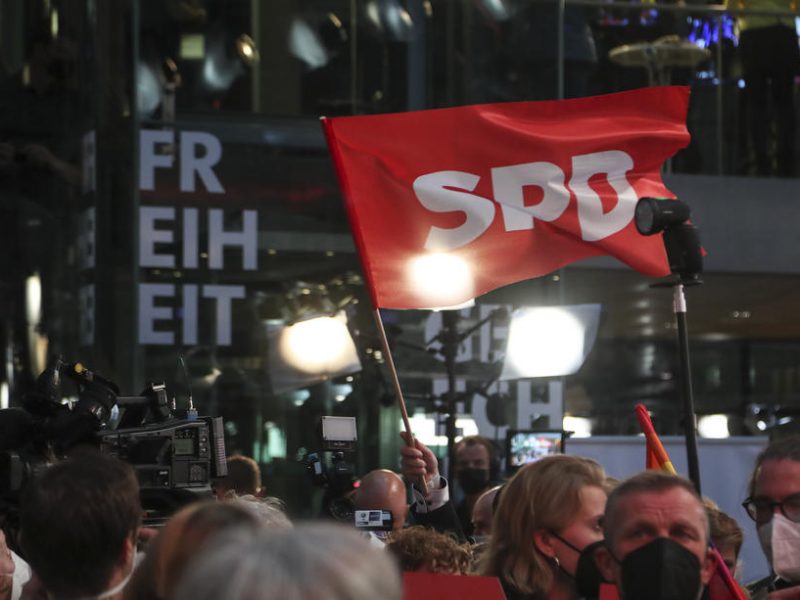 Germany’s Social Democrats clinched a narrow victory over Chancellor Angela Merkel’s Conservatives in Sunday’s federal election, but leaders of both parties quickly claimed their right to try to build a coalition government.

Despite achieving their best result so far, the Greens will be disappointed they did not gain more. Speaking in Berlin, Green leader Annalena Baerbock said voters had given her party a “mandate for the future” and indicated she favoured the “traffic light”-option.

“The night is young; we notice this country needs renewal and a climate government, that is the result of this federal election,” Baerbock said.

Christian Lindner, leader of the liberal, business-friendly FDP, suggested that he and the leaders of the Greens should talk first and then decide whether to join the Socialists or Conservatives.

Stopping at the traffic light

The Greens and the SPD have already governed Germany together, between 1998 and 2005 under former Chancellor Gerhard Schröder. The two parties’ programmes share a lot of similarities, especially in their social and fiscal policies.

However, this time, they need a third partner to get the majority in the parliament. The defining factor is whether the pro-market Liberals are willing to enter a coalition with two left-leaning parties. 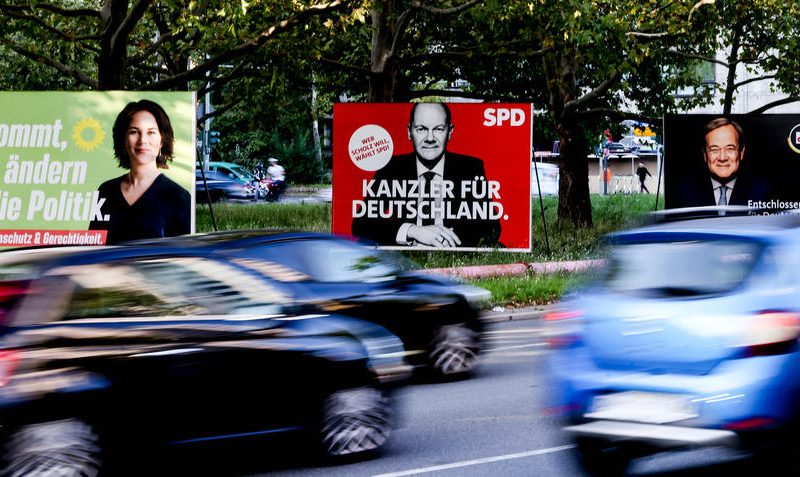 Given the Social Democrats are the relative winners, such a scenario is more likely. But it would face significant obstacles around the negotiation table as the Liberals disagree on almost all key issues. They have also demanded control of the finance ministry, something SPD party sources say is too high a price for the third-largest coalition partner.

While the SPD and the Greens want to push for more public investment, higher income taxes, an expansionist fiscal policy and minimum wages, the FDP disagrees.

It also represents a bad fit for the Liberals, who in this case would face opposition from the centre-right and far-right in parliament.

That the FDP leader is not prone to compromise was demonstrated during the failed 2017 Jamaica coalition talks, when he left the negotiation table, stating that “it is better not to govern at all than to govern badly.”

While the Social Democrats have the most legitimate mandate to lead a coalition, a Conservative-led union is not off the table just yet.

Lindner said on multiple occasions that being the strongest party does not mean that this party will also lead a coalition and has defined the Conservatives as their partner of choice. Speaking in Berlin as results trickled in, Lindner insisted a CDU-led ‘Jamaica’-option was still a possibility. 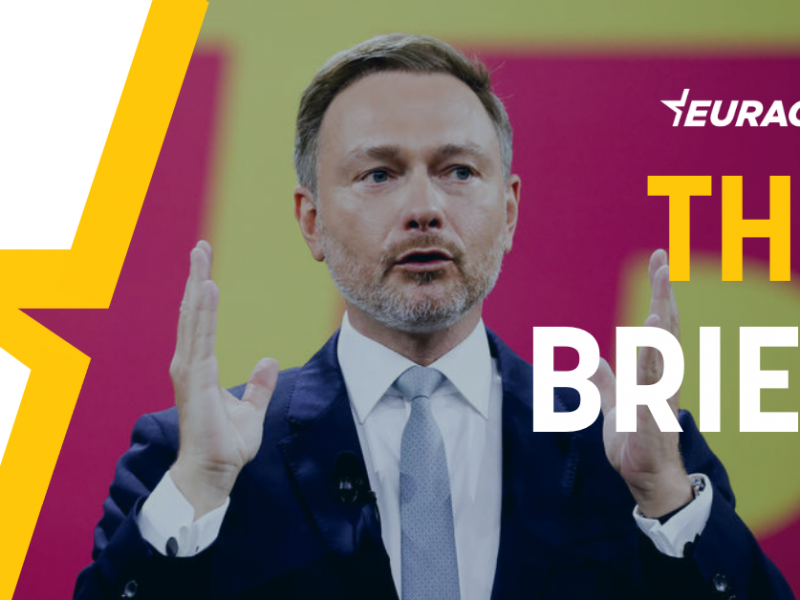 The Brief, powered by EHFG — The rise of the kingmakers

With the new German parliament likely to be more fragmented after the federal election on Sunday (September 26), several small parties are preparing themselves to play a kingmaker role in the subsequent coalition-building talks.

The Conservatives have already jumped on the bandwagon. But the Greens are less likely to consider such an option, as they have continuously attacked the Conservatives for their stance on climate and social policy.  Additionally, they would end up facing opposition from the centre-left and far-left.

However, such an option has one main advantage over the ‘traffic light ‘-coalition. It was already on the table after the 2017 German election. The three parties had already managed to find some common grounds and get a taste of each other’s preferences.

Back then, it wasn’t the Greens who torpedoed the coalition talks but the Liberals, who felt sidelined during the negotiation.

However, if things go downhill, there might also be a third option: a continuation of the grand coalition, currently ruled out by both camps.

If history were to repeat itself and the three-way coalition talks should fail, the Grand coalition could be the ultima ratio out of a potential negotiation deadlock.

There is already a precedent for this scenario.

Ahead of the election in 2017, both parties ruled out a continuation of the grand coalition. However, after the ‘Jamaica’-talks failed, they decided to continue it nonetheless, to avoid having a new election and a long period of a caretaker government.

Such a scenario could also be plausible this time around. If the various combinations of the three-way coalition fail to take shape, then a renewal of the SPD-Conservative alliance might be the only way out.

If no one can agree, a minority government is also a possibility. 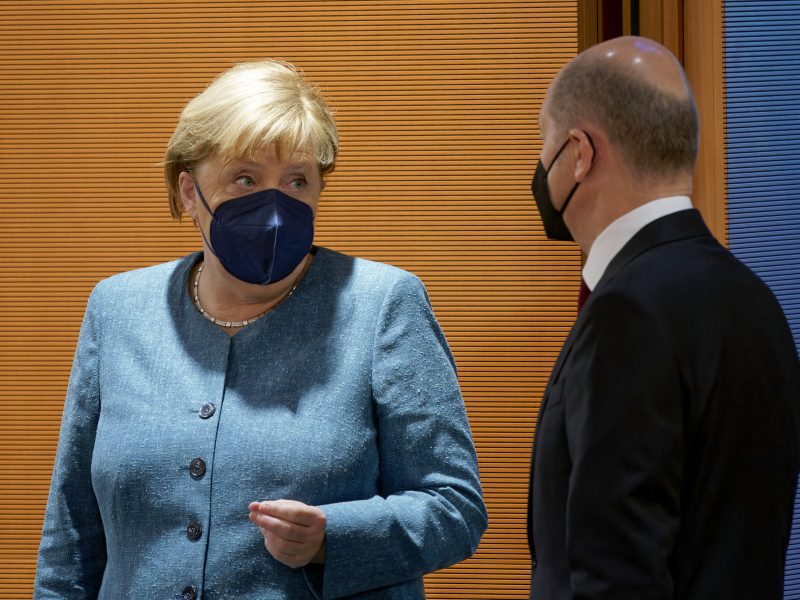 German Chancellor Merkel to stick around for a while after polls

As Angela Merkel said goodbye to her Stralsund constituency of 30 years on 21 September and visited Paris one last time as chancellor on 16 September, one might get the wrong impression that she is not long for the international stage.