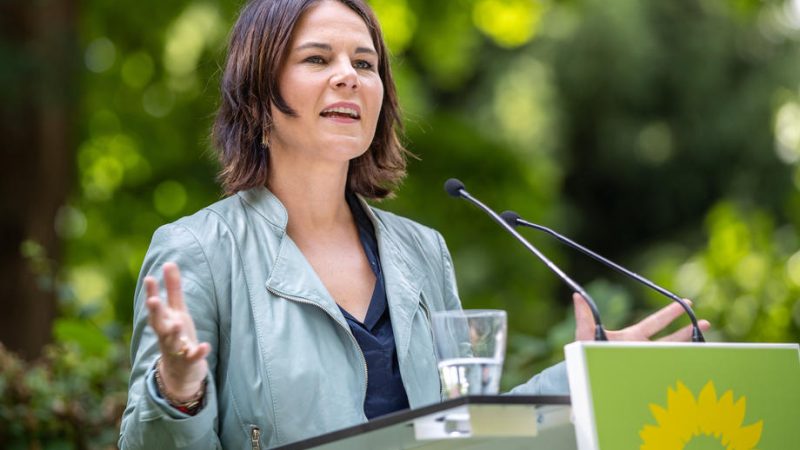 “Yes, I have never been chancellor nor minister. I stand for renewal, while others stand for the status quo,” Annalena Baerbock said after her nomination as the lead candidate of the Greens in 2019. [EPA/ANDREAS GORA]

Annalena Baerbock is the first Green lead candidate in German history. But who is Baerbock, and what are her plans for Germany and Europe?

Relatively unknown before she was elected as co-head of the party in 2017, she has since managed to convince party members and critics alike. Even former conservative CDU Interior Minister Thomas de Maizière said he was impressed by her performance during the coalition talks with the Greens after the election in 2017.

Critics, like the conservative CDU politician Friedrich Merz, accuse her of lacking government experience but she is confident she is the right person to succeed Angela Merkel.

“Yes, I have never been chancellor or minister. But I stand for renewal, while others stand for the status quo,” she said after the Greens nominated her as their top candidate in 2019.

Climate protection and coal phase-out top her agenda and she has one clear goal in sight: “to make Germany fairer and climate neutral,” she told Pro Sieben television in an interview broadcast on Wednesday (1 September).

However, her ambitions go far beyond fighting climate change as she is pressing for a broader socio-ecological transition. She also wants to turn the EU into a fully-fledged social and fiscal union and improve its capacity to act on the international stage.

But her performance in recent months was not void of controversy, as she was involved in several scandals, concerning the forgery of her resume and alleged plagiarism in a book she has published.

However, the Greens are still committed to their lead candidate. Claudia Roth, Green vice president of the Bundestag and one of Baerbock’s close confidants, told EURACTIV that “Annalena Baerbock is absolutely the right choice, even if she made mistakes in the past.”

“Our country needs her willingness to make changes, in order to step into the future,” Roth added.

From activism to pragmatism

Baerbock also stands for a shift within the Green party itself. The Greens have their roots in the ecological protest movement of the 1970s, but Baerbock has managed to give the party a more pragmatic image in order to appeal to voters.

This pragmatic approach is also visible in their relationship with the Fridays for Future movement. The movement is increasingly at odds with the Greens and even criticised the party for their “lack of ambition” in climate protection in June.

Baerbock even admitted in the interview that Fridays for Future are more resolute when it comes to climate protection than the Green party.

In return, Green co-party head Robert Habeck warned in an interview with the RedaktionsNetzwerk Deutschland of the movement’s “unrealistic demands” and emphasised that the party has to be pragmatic.

That the Greens are able to win elections if they leave behind their activist past was already demonstrated in the case of Baden-Württemberg, where Winfried Kretschmann managed to sway voters from the CDU and the SPD and win the past two elections.

Baerbock is also outspoken about her progressive stance on Europe.

During the interview, Baerbock emphasised her strong pro-European attitude and said that the EU will be one of her top priorities if she becomes chancellor.

The Greens want to expand the economic and monetary union into a fully-fledged social and fiscal union and are planning on transforming the recovery fund into a permanent investment and stability instrument.

Furthermore, she wants to strengthen the EU budget, by giving the EU direct tax revenues through the taxation of plastic and tech-giants.

The Greens also want to reform the Stability and Growth Pact to prevent growing privatization pressure and to increase investment during times of crisis, a Green spokesperson told EURACTIV.

Foreign policy is also on her agenda. Baerbock wants to expand the EU’s ability to act on the international stage and to put the EU at eye level with the US.

Baerbock, who describes herself as somebody who “talks turkey”, is also an outspoken critic of Poland and Hungary and said that under her chancellorship she would try to take more action against violators of the rule of law principle within the union.

The Greens main priority is to tackle climate change and shape the green transition. They are planning on enacting the biggest climate protection package in German history.

They want to finalise the coal exit by 2030, eight years earlier than the conservative CDU/CSU and the Social Democrats and to accelerate the expansion of renewable energies.

Furthermore, Baerbock wants to start the combustion engine phase out by 2030, to “ensure reliability in regard to climate protection and to give the automobile industry and consumers planning and investment security,” a spokesperson of the Greens told EURACTIV.

To relieve citizens from additional expenses, she wants to redistribute the additional revenue generated from rising carbon prices back to the people and create an “energy fund.” Under the proposed scheme, every citizen would receive €75.