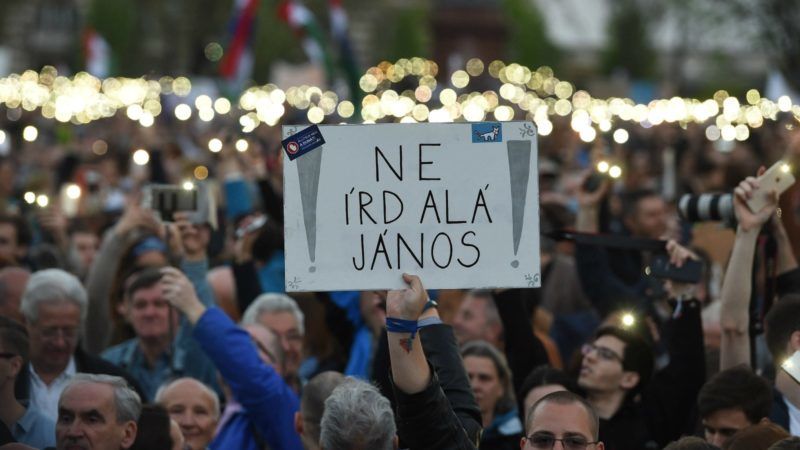 Demonstrators hold a placard reading 'Don't sign it, Janos', referring to President Janos Ader, as they protest against the amendment of the higher education law seen by many as an action aiming at the closure of the Central European University, founded by Hungarian born American billionaire businessman George Soros, in front of the Parliament building in Budapest, 9 April 2017. [Zoltan Balogh/ EPA]

The signing of the higher education legislation, the final legal hurdle before it passes into law, came after the largest street demonstration in Hungary in recent years.

Tens of thousands demonstrated Sunday (9 April) in Budapest against the legislation, many chanting “Don’t sign it, János!” and holding up placards reading “Veto!”

The university said late Monday that it would take legal action against the bill, calling it “discriminatory” and “a premeditated political attack on a free institution that has been a proud part of Hungarian life for a quarter of a century”.

“We will oppose this legislation to the full extent of the law,” the CEU said in a statement.

The bill, a modification of legislation from 2011, “does not infringe (rights of) freedom of learning or of teaching” enshrined in Hungary’s constitution, Áder said in a statement published by state news agency MTI.

The English-language CEU was founded by Hungarian-born billionaire Soros in the early 1990s, aimed at helping the region’s transition from communism to democracy.

The new rules, approved by MPs early last week, bar institutions based outside the European Union from awarding Hungarian diplomas without an agreement between national governments.

They will also be required to have a campus and faculties in their home country – conditions not met by the CEU, which is registered in the United States.

The legislation has been condemned by many academics at home and abroad, and has also drawn criticism from Washington and Brussels.

The US State Department has called for the proposal to be withdrawn, while an open letter signed by over 900 academics around the world also includes 18 Nobel prize-winning economists.

The legislation does not mention the CEU by name but the university sees itself as the main target and has warned it may have to close.

#CEU fights for its existence and for academic freedom in Hungary; here is what you can do to help! #istandwithCEU https://t.co/cjg6TF4gIt pic.twitter.com/l4zDNo03PQ

Critics see the move as another attack by Orbán on Soros, whom he accuses of seeking to meddle in politics and undermine Europe by promoting immigration into Europe through his funding of non-governmental organisations.

Last week the government published legislation that will oblige NGOs receiving above a certain amount of foreign funding to register and stamp any publication with “foreign-funded organisation”.

The Commission will hold a “first debate” over the anti-CEU law tomorrow.