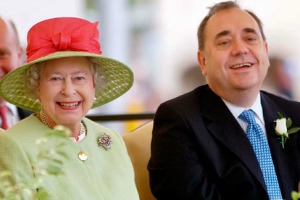 An independent Scotland would keep the British pound, the queen and remain in the European Union but have its own defence force and collect its own taxes, First Minister Alex Salmond said today (26 November).

In a 670-page blueprint aimed at convincing Scots they should vote on 18 September next year to end a 306-year union with England, Salmond said there would be no need to increase taxes if Scotland broke away.

"We know we have the people, the skills, and resources to make Scotland a more successful country," said Salmond, head of a devolved government in Scotland, which for now is still part of the United Kingdom.

He said Scottish taxes would not be spent on nuclear programmes and that the United Kingdom's nuclear missiles would be removed from Scotland for good.

"Independence will put the people of Scotland in charge of our own destiny" he added.

Nicola Sturgeon, the deputy first minister, has described the document as "the most comprehensive and detailed blueprint ever drawn up for a prospective independent country".

"If it's feasible in the UK, it should be feasible in Spain," said Albert Royo, secretary general of Diplocat, the Public Diplomacy Council of Catalonia, a public-private body charged with building support for Catalan's independence vote.

With 10 months to the Scottish vote, many of the 5 million Scots are still undecided.

The latest poll, published in the Sunday Times this week, suggested the gap had narrowed with 47 percent opposed to quitting the UK, 38 percent in favour and 15 percent undecided.

Britain's three main UK-wide political parties have argued against independence, saying Scotland would be worse off economically on its own and unable to defend itself or project power on the global stage as well as it can as part of the UK.

At stake are British oil reserves in the North Sea while debates over how Britain would split its national debt and the issue of the nuclear weapons are already fraught.

Pro-unionists have been helped in recent weeks by two reports from financial institutions. One warned Scotland would need to raise taxes and cut spending as North Sea oil revenues decline and its population ages and the second said independence would complicate cross-border pensions.

But Alistair Carmichael, the new Scotland secretary in the UK government, is aware of the power of wavering voters who gave the SNP a surprise landslide victory in Scotland two years ago.

New to the role, he has toughened up the rhetoric, saying nationalists cannot make assumptions such as being able to keep the British pound.

A report by the All-Party Parliamentary Group on Taxation, in the UK's parliament in London, said under SNP plans, the UK would dictate Scottish fiscal policy even after independence.

Researcher Marius Ostrowski said keeping the pound would make Scotland dependent on the Bank of England as a central bank and lender of last resort, and on the UK government's lead for its fiscal responsibility rules.

Asked to comment, Commission spokesperson Olivier Bailly made it clear that if Scotland or another entity becomes independent and wishes to remain in the Union, it would need to apply for EU membership.

Moreover, under EU treaties, such a new candidate needs unanimity among the older member states to accede to the union, which means that in the case of Scotland the UK would have to okay its EU accession.