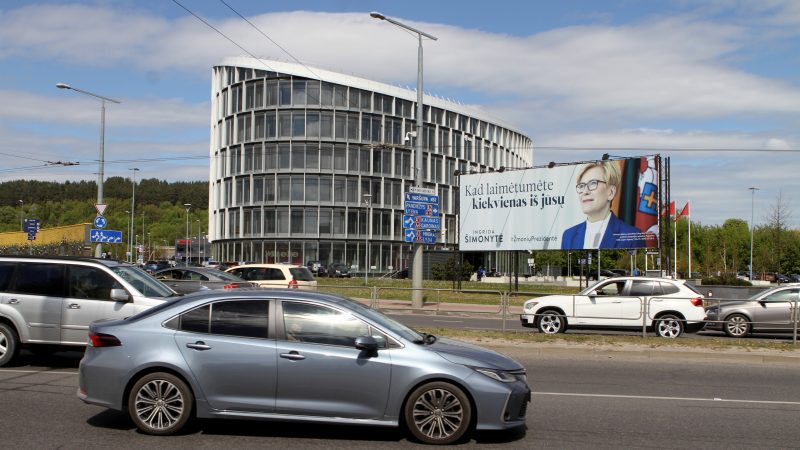 A poster with slogan 'When Everyone Win' of Lithuanian presidential candidate Ingrida Symonite in Vilnius, Lithuania, 9 May 2019. [Valda Kalinina/EPA/EFE]

For all its economic growth, income inequality and poverty are top election issues as Lithuanians vote on Sunday (12 May) for a new president in round one of a tight race in the Baltic eurozone state.

Nine candidates are vying to replace two-term independent incumbent Dalia Grybauskaite, but surveys show that only three stand any real chance of making it to the expected 26 May run-off coinciding with European parliament elections.

The main centre-right contender, Simonyte is popular among wealthy, educated urban voters while the populist accents of Skvernelis’s campaign resonate with the rural poor.

Nauseda is offering a catch-all option across the rich-poor divide in the formerly Soviet-ruled country of 2.8 million people battling sharp population decline.

“Citizens are thirsty for social justice and seek a candidate who can bridge existing social polarisation,” Donatas Puslys, an analyst at the Vilnius Policy Analysis Institute, told AFP.

Vilnius has been among the most vocal critics of Moscow’s 2014 military intervention in Ukraine. Unlike other eastern EU members, it has avoided major confrontations with Brussels.

But poverty and income inequality remain among the highest in the EU, largely due to weak progressive taxation.

Brussels has urged Vilnius to use strong economic growth exceeding three percent to broaden its tax base and spend more on social policy.

A technocrat who has warned against deepening inequality and the rural-urban divide, Simonyte has vowed to reduce it by stoking economic growth.

“We can’t isolate Vilnius from the rest of Lithuania,” she told supporters at a rally in the capital wrapping up her campaign this week.

“I like the way she talks. I don’t expect major changes, but I do believe we’ll stay focused on Western Europe,” Erika Balciukone, a 30-year-old Vilnius resident working in IT, told AFP.

The sometimes impetuous 48-year-old who labelled his rivals “elitist”, has vowed to fight corruption and continue generous spending “to reduce social exclusion and support families.”

Made PM by the governing Farmers and Green Union after the 2016 general elections, Skvernelis hinted he may quit office if he fails to enter round two.

“During his term, my pension increased by 100 euros,” supporter Valentina Isacenko, 76, told AFP at a Skvernelis rally in the eastern town of Sirvintos. The average pension stands at €360 per month.

A 54-year-old former banking adviser running as an independent, he has fans among voters seeking an impartial president above political feuding.

He insists “there are no backseat drivers” steering him and that his independence means he can “balance different interests” to seek consensus.

Vilnius University analyst Kestutis Girnius described Nauseda as “moderate and measured on almost all issues, perhaps too finely so, leading to doubts about what he really believes.”

Known for strong resolve during her two consecutive terms, outgoing President Grybauskaite is mentioned as a contender for the next president of the European Council.

Lithuanian presidents are in charge of foreign policy and hold a seat at EU summits. They also appoint ministers, judges, the military chief and the head of the central bank, but must often seek approval from parliament or the prime minister.