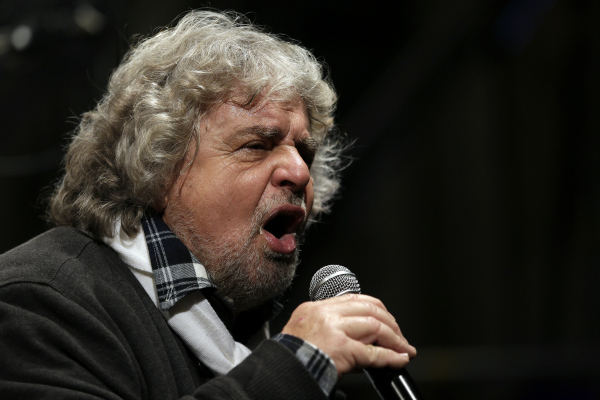 INTERVIEW / A newly-elected parliamentarian for the Italian Five Star Movement (5SM), led by former comic Beppe Grillo, told EURACTIV that the EU suffered from serious structural flaws, which are "unsustainable" in the long run. The party wants to open a debate on Italy's euro membership.

The EU has increasingly become a sanction-tool for countries that are incapable of respecting directives, Giuseppe Brescia told EURACTIV in an interview yesterday (28 February).

Brescia, a 5SM campaigner and new member of the Chamber of Deputies, clarified his opinion about the EU by insisting that the process of European integration, in its current form, is untenable for his party and Italy.

Grillo, the Five Star Movement leader, has commented strongly on Italy’s problematic relationship with the EU and the euro currency in recent years.

The 24-25 February election left Italy’s political system in deadlock, as electoral groups seem incapable of forming a stable government coalition. The single largest party remains the 5SM, which won 108 seats in the Chamber of Deputies and 53 seats in the Senate.

The views of elected deputies and senators from the 5SM remain unclear, as the movement has a less centralised governing structure, while having voiced various individual opinions on Italy’s future in the eurozone.

“We continue thinking that the principal function of the EU remains one of sanctions, while the emphasis is disproportionately put on not being able to respect directives, instead of values of European community," said Brescia.

Insisting on the movement not being anti-European, he noted that the current EU structure should be regarded as "unsustainable" as a result of financial issues in Italy and abroad, including a growing and unjustifiable government bond "spread".

“The Five Star Movement isn’t anti-European per se, but the current structure of the EU simply can’t last for very much longer," he said.

“Our politics can’t be shaped by the Italian bond spread. Italy has a frighteningly high public debt that continues to grow. 5SM has also emphasised on Italy’s previous leaders’ relationship with the EU, which they claim have legitimised several indefensible and corrupt infrastructure projects in Italy."

“Our old political class use the EU to legitimise absurd projects, including the TAV railway between Turin and Lyon, which has already been dubbed as a waste of money in the rest of Europe,” said Brescia.

The 5MS’s official programme contains a mixture of policies ranging from environmental protection to increased education spending, as well as a controversial proposal to hold a referendum on the euro.

“Before creating the euro, we should have shaped Europe," said Brescia. “We should have created a solid base, made up of shared fiscal politics. On this point, the 5SM wants to open a debate and allow for Italians to chose whether to continue with the euro currency."

European markets have faced turbulence in recent days as a result of the unstable political situation in Italy. Further instability is expected if the 5SM allows for a referendum to take place, putting the eurozone’s third largest economy at risk of leaving Europe’s shared currency.

“Obviously we wouldn’t leave the eurozone immediately, we would have to change the constitution to introduce a referendum proposition. That’s a very long process,” said Brescia. “A solution could be to go towards a euro at two speeds and then in 10 years reintegrate Italy into the common currency again.”

Despite the fears of facing instability and a populist party accounting for around 25% of the Italian electorate, election experts have noted that the 5SM reflects a more pragmatic policy than expected.

“Our demographic studies conducted over the past weeks [show] the electorate of the 5SM does not look very revolutionary at all. Some votes were pouched from the extreme left and the extreme right, but realistically the grand majority of their voters are more moderate,” said Professor Piergiorgio Corbetta, director of research at the Cattaneo Institute in Bologna.

“Having looked at their previous track record on a regional level, I would say that it went ahead in a stable fashion with budgets being approved and laws being passed,” he told EURACTIV.

“We should not forget that this is not a protest movement, as it accounts for way over 10%, which is normally the threshold for extreme voters. We might therefore expect an instable government, but a more straight forward policy line than expected,” he said.

On 21 December 2012, Mario Monti resigned as prime minister due to the withdrawal of coalition endorsement from the centre-right People of Freedom party.

With waning support for the technocratic Monti cabinet and the dissolution of parliament in December 2012, the Italian constitution demanded that elections were held within 70 days.

Based on proportional representation and electorally divided into 26 districts for the Chamber of Deputies and 20 regions for the Senate, Italy elected 945 members into the lower and upper houses of parliament on 24-25 of February 2013. The election resulted in a slim majority for the centre-left Democratic Party in the Chamber of Deputies, while the centre-right dominate the Senate. The outcome has frozen Italy’s political system, as electoral blocks seem unable to form a stable coalition.

0 responses to “Italian Five Star MP: EU is ‘unsustainable’ in its current form”