Italian Prime Minister Giuseppe Conte will on Tuesday (19 January) face a vote of confidence in parliament, seeking the Senate’s support for his teetering government as it battles a deadly coronavirus pandemic.

The ruling coalition has been on the brink of collapse since former premier Matteo Renzi withdrew his Italia Viva party last week, depriving Conte of his majority in the upper chamber. 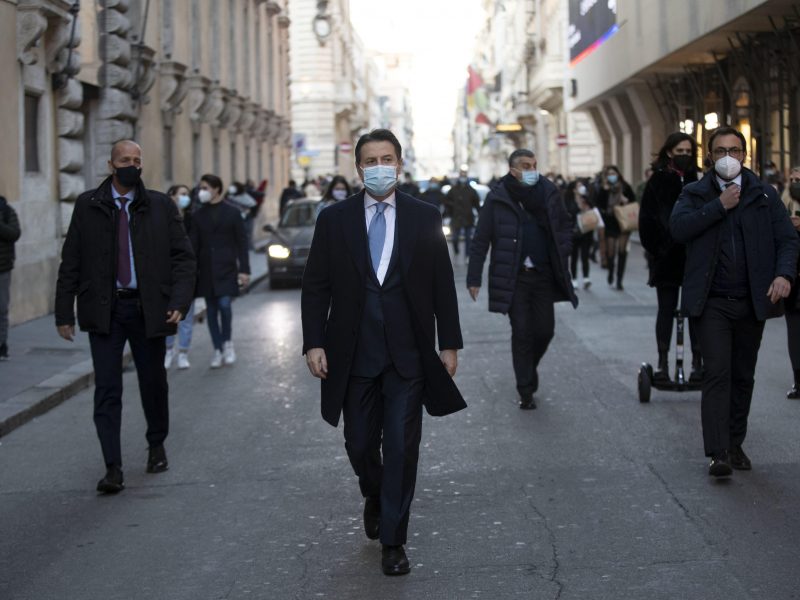 Conte, who since 2018 has headed two politically divergent governments, is desperately seeking the support of opposition lawmakers to allow his coalition to stay in power.

He has warned of the danger of leaving Italy rudderless in the middle of a pandemic that has claimed more than 82,000 lives and devastated the economy.

“The future of the country depends on the choices that each one will decide to make in this grave hour,” he told the lower Chamber of Deputies on Monday.

He won a confidence vote late Monday in the lower house, where the coalition parties — notably the centre-left Democratic Party (PD) and the populist Five Star Movement (M5S) — have a majority.

But after Renzi withdrew, Conte has no formal majority in the Senate and the vote later Tuesday could be tight.

Renzi has said he will likely abstain, making it more likely the government will win — but without a stable majority, the crisis risks being merely delayed.

“In all probability, Conte will obtain the confidence of the Senate,” said Giovanni Orsina, head of the Luiss School of Government in Rome.

He predicted that “the Conte government will more or less survive as it is with a smaller majority, and therefore with a more marked parliamentary weakness”.

Minority governments are nothing new in Italy, which has had 29 prime ministers and 66 governments since 1946.

But the task facing this one is unprecedented, with parts of the country currently under partial lockdown and a €220-billion European Union recovery package to push through parliament.

“Conte would end up commanding an extremely shaky majority that would risk collapsing at any divisive vote in the coming months,” noted Wolfango Piccoli of the Teneo consultancy.

Italy was the first European country to face the full force of the pandemic early in 2020 and has been one of the EU’s hardest-hit countries — both in terms of its death toll and the impact on an already-struggling economy.

It has been allocated a large share of a €750-billion European Union rescue fund, but Conte’s 2€20-billion spending plan was a trigger for the current turmoil.

For weeks before he withdrew, Renzi had criticised Conte for his leadership style and his handling of the pandemic, and warned that he and M5S risked squandering the EU billions.

Critics in turn accused Renzi — whose Italia Viva party is polling at just three percent — of rocking the boat for political gain, saying he wanted to force a government reshuffle that would give him more ministerial power.

If Conte fails to win on Tuesday, he could resign and seek to form a new cabinet, or PD and M5S — and even Renzi — could go on without him.

Another option might be a new, technocratic government, probably led by a non-partisan figure, to see Italy out of the worst of the Covid-19 crisis.

The nuclear option is snap elections, which none of the ruling parties want, as polls point to victory for the centre-right coalition comprising Silvio Berlusconi’s Forza Italia and Matteo Salvini’s far-right League party.

Conte on Monday appealed for support from lawmakers from “the highest European tradition — liberal, popular and socialist”.

He was heckled by opposition lawmakers shouting “Go home!”, while Salvini tweeted: “The sooner this government goes, the better for the country.”