While his decision is not expected to bring down the government, it underscores deep divisions within 5-Star and injects further uncertainty into already fractious relations with its coalition partner, the centre-left Democratic Party (PD).

“Today I am here to tender my resignation as head of the 5-Star Movement,” the 33-year-old Di Maio told party members at an event to present a new structure of regional chiefs.

He said Vito Crimi, the head of the anti-establishment party’s internal rules committee, would take over as caretaker until a new leader is chosen following a party congress to be held in the coming months.

Italian government bond yields sold off when Di Maio’s intentions were leaked earlier in the day, but later returned to their opening levels as fears of an imminent government collapse receded.

In his first comments after taking the reins of the party, Crimi, a low-profile senator, said Di Maio’s departure would have no impact on the government’s stability. Prime Minister Giuseppe Conte issued a statement with the same message.

The move by Di Maio, who will remain as foreign minister, comes days before a regional election in Emilia Romagna in which the right-wing League is threatening to end 75 years of uninterrupted PD rule.

That outcome could put the five-month-old government’s survival at risk.

“The PD has just announced a major rebranding is in the works and these things, leaders quitting and party overhauls, only happen in Italy when the house is on fire.”

5-Star won 33% of the vote in a national election in 2018, but since then its popularity has fallen sharply and recent polls put it at around 16%.

“This is a difficult time for our movement,” Di Maio said during an hour-long speech in which he pledged to maintain a front-line role and took frequent swipes at alleged disloyalty from some party colleagues.

“The noise of a few has drowned out the work of a great many of us,” he said in reference to frequent internal infighting. “In these years we have seen two types of people: Those who put our movement before themselves, and those who put themselves before the movement.”

Di Maio’s internal critics accused him of failing to share power outside his inner circle of advisers.

5-Star is also divided over its future identity, between those who think it should maintain its traditional non-ideological equidistance from the other parties and those who favour a long-term progressive alliance with the PD.

Di Maio was elected 5-Star chief in 2017 and under his leadership the movement won twice as many votes as its nearest rival at the 2018 election, but still did not have enough seats to govern on its own.

After lengthy negotiations it initially formed a coalition with the League, switching to an alliance with the PD last September after League leader Matteo Salvini walked out of government. 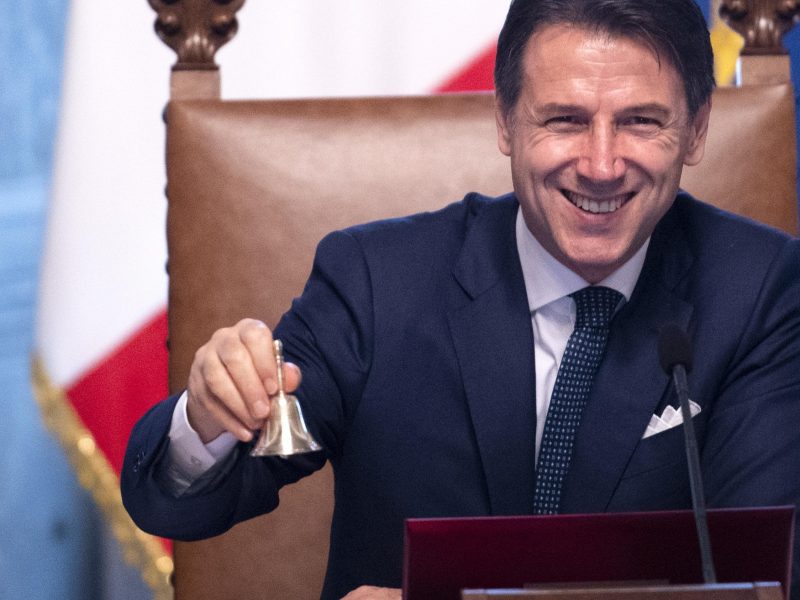 New Italian coalition sworn in, promises 'not to quarrel with Brussels'

Di Maio was sceptical about hooking up with the PD but, with many of the party’s lawmakers opposed to fresh elections, he was persuaded to do so by 5-Star’s founder Beppe Grillo.

As leader of the largest government party, Di Maio was deputy prime minister, industry minister and labour minister in the government with the League, leaving all three posts to take up the foreign ministry portfolio in the cabinet with the PD.

Since the election, more than 30 lower house and senate lawmakers have left 5-Star’s parliamentary grouping, some defecting and some being ejected. That exodus has left the government with only a wafer-thin majority in the upper house Senate.

Among those cited as 5-Star’s possible future leader are Conte, who was once the party’s candidate for civil service minister, Industry Minister Stefano Patuanelli and Alessandro Di Battista, a former lawmaker who did not stand at the last election but is still popular among party supporters.