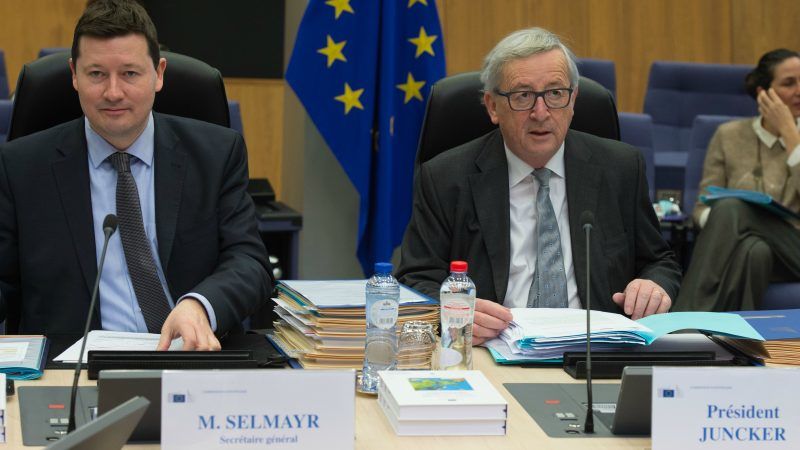 Martin Selmayr, in his new capacity of Secretary-General; of the Commission, and Jean-Claude Juncker, on 7 March 2018. [Commission]

The European Parliament’s budgetary control committee wants a senior EU Commission official to clarify the sudden promotion of its president’s chief aide to the top of the EU civil service, underlining the continuing unease among lawmakers over the move.

European Commission President Jean-Claude Juncker elevated Martin Selmayr, a 47-year-old German, to be secretary-general of the EU body last month, triggering accusations from Brexit campaigner and MEP Nigel Farage of nepotism, from others about a lack of transparency and complaints to the European Ombudsman.

The saga may weaken the Commission’s power to get wayward EU countries to toe the line. Hungary, criticised by the Commission of weakening democratic checks and balances, has accused the agency of double standards.

The Greens bloc in the European Parliament has threatened to hold up approval of the Commission’s budget over the issue while the Liberals want the promotion reversed.

#SelmayrGate: the S&D group asks if Selmayr’s appointment will be suspended until the end of the investigation by Cont committee and Ombudsman.

Here one of the several questions by Socialist group. pic.twitter.com/3QD676wO1X

Juncker, whose five-year term ends in October next year, has defended the appointment as one he and his 27 fellow commissioners are entitled to make, as well as on the basis of Selmayr’s capabilities.

However, diplomats say member states have begun to worry that the issue was becoming an unwelcome distraction and could even fuel eurosceptics before EU elections next year.

The committee, which is made up of 30 lawmakers from 17 EU countries and checks how EU funds are used, said on Monday that it planned to ask EU budgetary chief Günther Oettinger for more details at a public hearing on 27 March.

They have also written to Juncker for more information.

In the interests of transparency Martin Selmayr edits his own wiki page using his own name pic.twitter.com/Z7i9XTL5Hw

Martin Selmayr’s Wikipedia entry edited ahead of his promotion https://t.co/nurCpyExzg