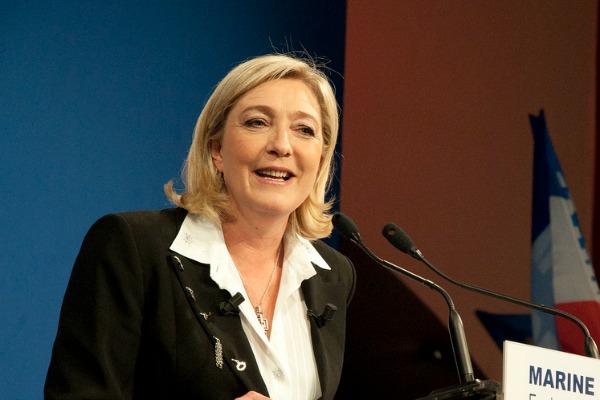 Marine Le Pen, leader of the French party the Front national (FN), visited The Hague today (13 November) to meet with Dutch politician Geert Wilders, in an effort to build a powerful far-right political force during the 2014 EU elections.

Receiving Le Pen in The Hague, Wilders said that she was “an important politician and a good friend”, reported the Dutch public broadcaster NOS.

The two held a joint press conference, underlining their plans to work together: "We want to regain [as nations] the ability to decide for ourselves how we handle our borders, our currency or the legislative powers of our national parliaments. We hope to regain this in order to liberate our countries from the ‘monster' that is Brussels,” Wilders said.

The main purpose of Le Pen’s visit was to discuss how the two far-right forces could work together in the upcoming European elections. The French politician said a "beautiful dynamic" had started, and that it was a "sign of the times": "The people of Europe are standing up against the EU. They want to defend their identity."

Asked by the press on what he thinks of Le Pen's father, Jean-Marie – the founder of FN who was convicted of contesting crimes against humanity related to the holocaust – Wilders said: "I deal with the current FN, and haven't noticed any racism or anti-semitism in Marine Le Pen's thinking."

The two politicians have begun forging closer ties for some time. Earlier this year, Le Pen expressed her intent to back Wilders in the upcoming campaign.

Geert Wilders reached out to a number of European far-right parties this summer, hoping to create a coalition between his Freedom Party (PVV) and other Eurosceptics in the next European Parliament.

The Belgian Flemish Vlaams Belang (VB), the Austrian Freedom Party FPÖ, the True Finns Party and the Italian Northern League, and others, have joined informal discussions on forming a political group in next Parliament.

The parties share extremist views on immigration, a closed border policy, a nationalist agenda and a fiercely critical view of the EU institutions.

“We are looking into creating a broad coalition. The circumstances have never been so promising as now – and this is a feeling that is shared [amongst Eurosceptic politicians],” he said.

Though the parties involved in the coalition talks share a radical right-wing view on migration – often criticised for being xenophobic – Claeys stressed that openly neo-Nazi or fascist parties such as the Hungarian Jobbik party or the Greek Golden Dawn party were excluded from their plans.

Le Pen and Wilders are also unlikely to bring on board the United Kingdom Independence Party (UKIP), which has already stated that they are not interested in working with them.

"Personally, I have a lot of respect for Nigel Farage," said Wilders. "I hope that other parties will join our initiative," he added, though admitting that "Farage is not keen on working together just yet."

The Lega Nord party and UKIP are both part of the Parliament's Europe of Freedom and Democracy (EFD) group, consisting of 32 MEPs from 11 countries. The other parties in talks with Le Pen and Wilders have non-attached members sitting in the European Parliament.

A minimum of 25 MEPs from at least seven different countries are required to form a political group.

If Wilders plans are successful, it could signal the formation of a second far-right parliamentary group after the May elections.

Analysts have estimated that Eurosceptic politicians could claim between 90 and 150 seats in the next European Parliament.

The FN currently holds three parliamentary seats, but they could win over 20% of French votes in next year’s elections, recent polls show.

The PVV suffered a setback in the 2012 general elections, but has been recovering rapidly. Recent polls estimate that the party could win the highest number of seats of all Dutch parties in the EU elections.

But not many supposed “like-minded” parties were ready to join the initiative, and UKIP, the most vocal Eurosceptic party in the EP, rejected outright the proposition.