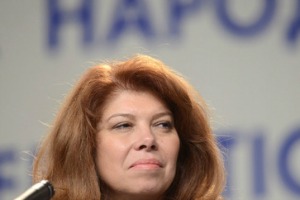 A video showing a hacker introducing what appears to be the correct password for Iotova’s email account was first published on the website Balkanleaks, which specialises in anonymous sharing of sensitive information.

The investigative website Bivol published on Thursday (13 February) excerpts from an email, which represents an offer made by the public relations company Leadway Media Solutions to Iotova. The PR service package is offered by Aneta Avramova, an official in the company.

Accordingly, Avramova has offered Iotova 50 comments in internet forums per month, 150 comments in Facebook and 50 tweets, as well as 15 press publications per month. The PR company also offered to create a “thematic internet group” to campaign under the motto 'Where has the money for the refugees disappeared?'

The issue of Syrian refugees is a sensitive topic in Bulgaria, which is one of the poorest countries in the EU and ill-equipped to deal with the arrival of some 11,000 asylum seekers in just a few months.

“It is a pleasure to work for you and to be a member of your team,” Avramova wrote to Iotova. Her mobile number is indicated in the email, but EURACTIV was not able to get through to any of the telephone numbers of the company indicated on their stationary.

According to leaked correspondence published by Balkanleaks, Leadway Media Solutions reports to Iotova that for a given period 123 comments have been published, 53 of which as comments under press articles, and 70 on Facebook. In total, comments have been posted in 28 media, with links to each one of them. A list of the 'messages' that the so-called 'internet trolls,' controlled by Leadway need to convey, was published in a 62-page report addressed to Iotova.

The company also ensures that Google searches rank positive articles about Iotova higher and attempts to bring the number of followers to Iotova’s twitter @IIotova account to 500. She has at present 112.

The episode provides a rare insight into the fabrics of Bulgarian politics and involves two emblematic personalities. Georgieva, a former World Bank vice-president, without a party affiliation, is considered one of the most popular personalities in Bulgaria. Iotova, a prominent figure of the Bulgarian Socialist Party (BSP), is tipped to be N.2 in the European Parliament election list, second only to Stanishev.

Iotova has recently publicly attacked Georgieva for “not doing enough” in performing her duties and not providing adequate assistance to help Sofia deal with Syrian refugees seeking shelter in Bulgaria. [more].

In reaction, MEPs from the Socialists and Democrats group have mobilised to shield Georgieva against these attacks, which they saw as politically motivated.

The documents published show no proof that payments by Iotova to Leadway Media Solutions had been made. EURACTIV has asked the European Parliament if invoices by Iotova to the PR company had been submitted. EURACTIV also asked Iotova if she had charged the Parliament for such services. No answer has been received so far.

MEPs receive a so-called “parliamentary assistance allowance” of €21,209 per month. From this amount, they can spend 25% for service providers, such as external companies in the member states. But EU funds should not be spent on campaigning, according to Parliament rules.

The leaks shed light on what has always been considered a public secret in Bulgaria, that politicians hire 'internet troll' companies to influence public opinion, but also publish paid articles in media outlets without any mention of sponsored content. Some internet outlets sell communication packages to politicians to cover their activities in a “positive” way. Bulgaria ranks as the worst in the EU in Reporters Without Borders’ 2014 World Press Freedom index, coming in at 100th place globally. Last year the country was 87th.

In a separate article, Bivol writes that over the course of about one year, hundreds of 'internet trolls' have produced thousands of comments serving the BSP, reaching more than 50 electronic media, newspapers, radio and television forums, Facebook and other social networks.

Scandals may cause low voter turnout at EU elections

A list of leaked reports of services provided to the BSP is published on documents with Leadway logos. The name of Anton Kutev, one of the top BSP leaders, appears on each document. For nearly a year, from March 2013 until the end of January 2014, 672 "troll" profiles have produced 10,154 comments that push through "partisan theses".

Asked by the daily Trud to comment, Kutev said that he had seen no such reports and that “only volunteers” work for the BSP. “Would you call them trolls,” he asked.

Atanas Tchobanov, the editor of Bivol, told EURACTIV he had irrefutable proof that Leadway has a long-standing working relationship with the BSP.

According to Tchobanov, messages of support for the leader of the extremist party Ataka Volen Siderov, published on Leadway documents, are commissioned by the BSP. The Bulgarian minority government in which BSP is the leading force survives thanks to support from Ataka in parliament.

A long list of “messages” of support for Delyan Peevski, a controversial media mogul, is also part of the same reports. Last June, the two-week old minority government came under fire following the surprise decision of Prime Minister Plamen Oresharski to appoint Peevski as leader of the country’s State Agency for National Security (DANS). Protests requesting the resignation of the government have been ongoing since.

Jivko Georgiev, a sociologist, commented today (14 February) on national television, that because of the way the scandals were unfolding in the country, Bulgarians were less and less likely to turn to the polling stations for the European elections.

EurActis spoke to Iliana Iotova this morning, following the publication of this article. She said that she had indeed submitted an invoice to the European Parliament from the company “Leadway Media Solutions” for the amount of €4.000.

But she explained that the project was completely different from the one which is alleged by Bivol.

The invoiced project, she said, concerned a study which she said will be presented publicly next week.

She also said that she had another contract with “Leadway” on public relations services, but that one was in her words “private”. This contract, she said, was concerning the upgrading of her website.

The project invoiced to the European parliament study covered the social situation in the region of Vidin, the poorest in Bulgaria and in the EU, as well as Yambol and Kyustendil. The company has according to her gathered information about the unemployment situation, about the difficulties SMEs face, as well as what people think with regard to the economic future of their region.

Iotova also said that some of the information allegedly retrieved from her hacked email and published by Bivol was actually not from her email.

Asked by EURACTIV to comment, the leader of the Socialists and Democrats (S&D) group in the European parliament Hannes Swoboda said that as usual, he would not speak on “internal domestic issues”.

Regarding Commissioner Georgieva's work, he said that himself and S&D Group “value her work and engagement for humanitarian aid and civil protection”.

At the parliamentary election, held on 12 May, the party GERB (Citizens for a European development of Bulgaria) of former Prime Minister Boyko Borissov emerged as the largest party with 97 of the 240 seats.

But as GERB proved incapable of finding a coalition partner, the Bulgarian Socialist Party (BSP), which obtained 84 seats, formed a cabinet with the Movement of Rights and Freedoms (DPS), a mainly ethnic Turkish force, which obtained 36 seats.

As they control just 120 MPs, the two governing forces BSP and DPS enjoy the tacit support of Ataka, a nationalist and xenophobic force, which obtained 23 seats.