Lithuanian President candidate independent economist Gitanas Nauseda speaks to media during the waiting for the results of Lithuania's President elections in Vilnius, Lithuania, 26 May 2019. [Valda Kalnina/EPA/EFE]

Nauseda, 55, had 72% of the vote, according to election authority results after 42 percent of the ballots were counted. Simonyte, 44, a former finance minister in a centre-right government, stood at 28%.

“I was the independent candidate and my task in this election campaign was to unify Lithuanian people, no matter where they live, in small regions, villages, small cities or big cities,” Gitanas Nauseda told Reuters after declaring victory. 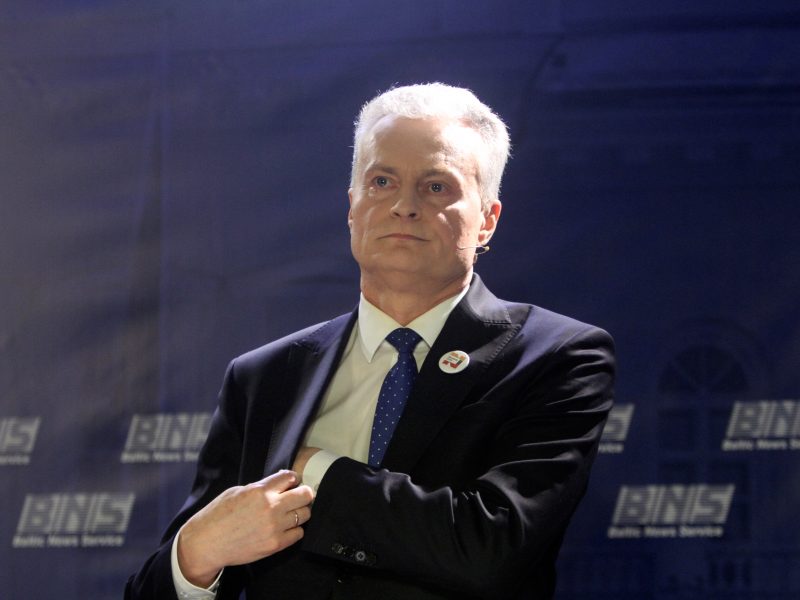 Nauseda, a household name from his role as chief economist at a top bank, has pledged to follow the tough stance set out by current President Dalia Grybauskaite, the Baltic nation’s “Iron Lady” and of the European Union’s most outspoken critics of the Kremlin.

The political outsider’s first challenge will be to resolve a government crisis. Prime Minister Saulius Skvernelis pledged to quit on the presidential inauguration day after failing to advance from the first round of the presidential election.

The Lithuanian president has a wide semi-executive mandate and can veto laws passed by the parliament.

He also will have decisive role in shaping the country’s foreign and security policies as well as in appointing key officials such as the prime minister, judges, the chief prosecutor, and the central bank governor.

Five years after Moscow’s annexation of Crimea from Ukraine that sparked fears of further Russian aggression across Eastern Europe, the election campaign in Lithuania was dominated by voter anger over economic inequality and corruption.

Income inequality is among the highest in the European Union, second only to Bulgaria.

In an earlier interview with Reuters, Nauseda said he would use his presidential powers to help businesses expand in emerging markets, especially China, and request that the government increase revenues and better fund social services such as pensions.

Nauseda’s election pledges include supporting Poland in its quest to have a permanent US military base, dubbed “Fort Trump.”

Lithuanians also voted for European elections, giving an edge to the Homeland Union, an EPP-affiliated party.