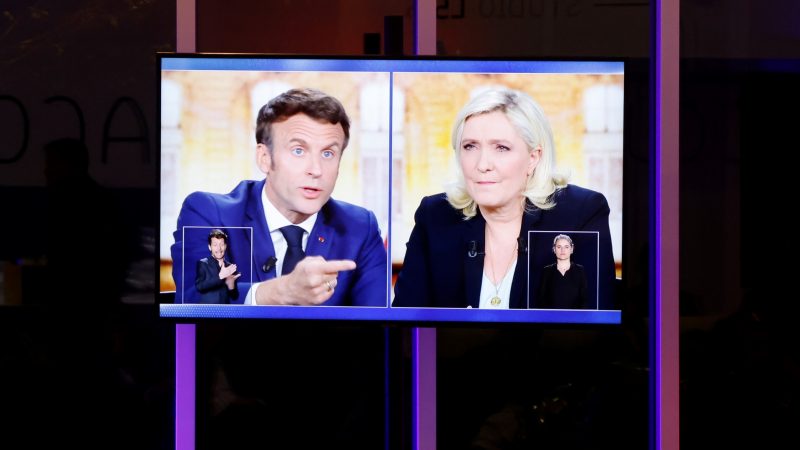 President Emmanuel Macron and far-right rival Marine Le Pen on Thursday (20 April) prepared for a final rush of campaigning before France’s presidential election after an acrimonious TV debate where they clashed over relations with Russia and the Islamic headscarf.

France faces a stark choice in Sunday’s second-round run-off between the centrist Macron and the anti-immigration Le Pen, who will seek to become the country’s first far-right head of state in an outcome that would send shockwaves around Europe.

There are just two days of campaigning left as Saturday is a day of calm with no campaigning allowed.

On Thursday, Macron was due to meet voters in the north of Paris and Le Pen to hold a rally in the northern city of Arras.

Wednesday’s bruising three-hour live televised debate saw Macron repeatedly seeking to land punches on Le Pen over her record, while she sought to keep the focus on the government’s performance.

With Russia’s invasion of Ukraine overshadowing the campaign, Macron angrily zeroed in on a loan Le Pen’s party had taken from a Czech-Russian bank ahead of her 2017 election campaign.

Macron also referred to Le Pen’s past recognition of Russia’s 2014 annexation of the Ukrainian peninsula of Crimea. “Why did you do this?” he asked.

Le Pen replied that she was “an absolutely and totally free woman”, arguing that her party had only taken that loan as it could not find financing in France where banks refused to lend to her.

Macron adopted a variety of poses to express scepticism at her arguments, raising his eyebrows, leaning his chin on his fists and lamenting in apparent bewilderment “Madame Le Pen… Madame Le Pen!” 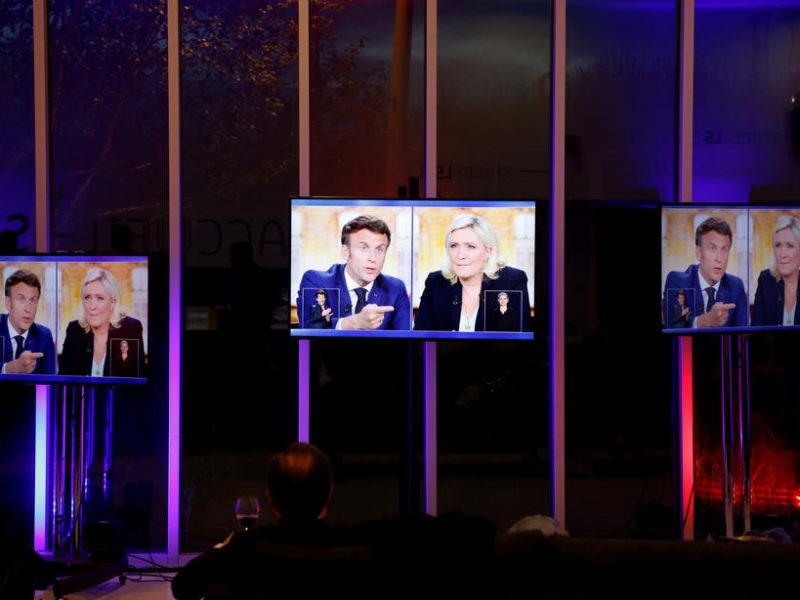 The two presidential candidates confronted each other on the topic of Russian sanctions, while the incumbent President Emmanuel Macron called Marine Le Pen out on her financial dependence on Moscow.

Unsurprisingly, the debate for the second round of the presidential election …

The most explosive clash came when Le Pen confirmed she was sticking to her controversial policy of banning the wearing of the Islamic headscarf by women in public, describing it as a “uniform imposed by Islamists”.

Macron responded: “You are going to cause a civil war if you do that. I say this sincerely.”

She also vowed to put an end to “anarchic and massive” immigration into France, claiming it was worsening crime which she said was becoming “unbearable” for people all over the country.

The priority for Le Pen was to avoid a repeat of the 2017 run-off debate where Macron managed to make her look flustered and sometimes not on top of her brief.

She sought to put heat on the president, mocking how the “Mozart of finance” had left a “bad” economic legacy that included an extra €600 billion in national debt.

“It’s not Gerard Majax (on TV) this evening,” retorted Macron, referring to a well-known French television conjurer. “You never explain how you will finance your projects and you are not honest with people.”

Turning to Europe, Le Pen insisted she wanted to stay in the European Union but reform the bloc into an “alliance of nations”.

“Your policy is to leave Europe,” Macron responded, describing the election as a “referendum for or against the EU”.

There were also intense exchanges on daily concerns such as the rising cost of living, which Le Pen has made a major feature of her campaign.

Both candidates have their eyes on voters who backed third-placed hard-left candidate Jean-Luc Melenchon in the first round. He has refused to urge his supporters to vote for Macron in order to keep Le Pen out of the Elysee Palace.

Le Pen said she had seen people “suffering” over the first five years of Macron’s rule and that “another choice is possible”.

Macron replied that “we must and should improve people’s daily lives through major projects for the school and health systems”. 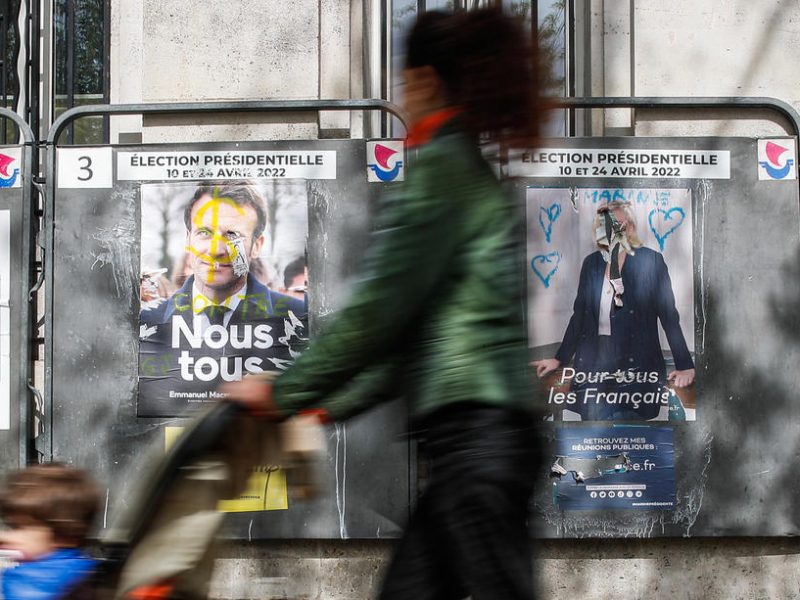 With five days to go before the final run-off of the French presidential election, the two remaining candidates are adopting opposing strategies as far-right candidate Marine Le Pen wants to be viewed as ‘presidential material’ while President Emmanuel Macron aims to get closer to the people. EURACTIV France reports.

Macron is favourite to win the run-off, with most polls showing an advantage of over 10 percent, which would make him the first French president to win a second term since Jacques Chirac in 2002.

But analysts and allies of the president have warned the result is far from a foregone conclusion, with polls indicating that over 10% of French people who intend to cast their ballots have yet to decide who to vote for.

Supporters of both camps celebrated the performances of their candidates, with Macron brandishing his trademark self-confidence and Le Pen avoiding the pitfalls of 2017.

But the challenger did not at any moment cause Macron discomfort, while the president adopted a much more aggressive approach.

“Macron on the attack, Le Pen on the defensive,” headlined the Le Parisien daily in its Thursday edition. The left-leading Liberation said Le Pen was “vague on numerous subjects” and Macron “arrogant”.

A snap opinion poll by Elabe for BFM TV said 59% of viewers found Macron the most convincing and that 39% plumped for Le Pen.

“Such a waste,” tweeted Melenchon. “The country deserved better.”