Chancellor Angela Merkel (L) and new French President Emmanuel Macron talking on the terrace during their meeting at the German Chancellery. Berlin, 15 May. [EPA]

Macron, the fervently pro-European centrist sworn in as head of state on Sunday, in keeping with tradition made his first trip abroad to Berlin, its ‘power couple’ partner in the heart of the European project.

Merkel and Macron stand to attention as French anthem plays. Chants of "Macron! Macron!" from the crowd. Quite a moment. pic.twitter.com/2k33GliMbn

Merkel, in power for a decade, supported the two core European powers “new push” to further their cooperation and provide “new momentum” to the Franco-German axis.

“There is a common understanding that we can’t just focus on Britain leaving the EU but that, first and foremost, we have to think about how we can deepen and crisis-proof the European Union, especially the eurozone,” she said at a joint press conference.

Brexiteers sneering about Merkel and Macron. But beneath the sneers you can smell the fear.
The EU is back, baby. pic.twitter.com/sm48wxXsjK

Ahead of his visit, Macron’s ideas on reforming the eurozone – including setting up a separate budget, legislature and finance minister for the currency bloc – had sparked scepticism in Berlin.

Finance Minister Wolfgang Schäuble had warned that such deep-reaching reforms would require EU treaty changes, which were “not realistic” at a time when Europe was hit by a surge of anti-euro populism.

But Merkel left the door open, saying that “from the German point of view, it’s possible to change the treaty if it makes sense”, while Macron also said that there was “no taboo” in addressing the issue.

Macron also soothed German concerns over the mutualising of “old debt” between eurozone countries, saying he does not favour the idea of so-called eurobonds, but adding that he was open to sharing future burdens. 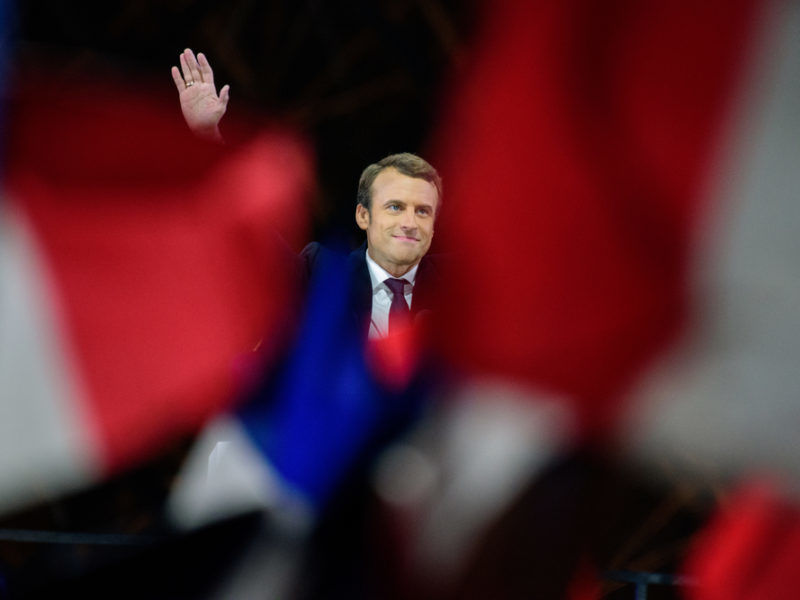 Philippe, a little known 46-year-old MP and mayor of the northern port of Le Havre, comes from the moderate wing of the right-wing Republicans party and is seen as a pragmatist.

His appointment was seen as a strategic move by Macron, who is trying to woo modernisers of all stripes to his new centrist party, the République en Marche (Republic on the Move, REM), having already won over dozens of moderate Socialist MPs.

Former investment banker Macron, who trounced Le Pen in the 7 May presidential run-off, aims to take votes from both the Republicans and Socialists in next month’s crucial parliamentary election.

Philippe has been presented as his Trojan horse on the right of the spectrum.

Taking over from outgoing prime minister Bernard Cazeneuve during a short ceremony, Philippe described himself as “a man of the right” who was driven by “the greater good”.

These microphones were clearly set up for Bernard Cazeneuve, rather than France's new Prime Minister Edouard Philippe pic.twitter.com/rRUj8ZsHHQ

Like Macron, Philippe is a product of France’s elite ENA college who once worked in the private sector and has little truck with the country’s fraying left-right divide.

Relatively unknown outside his northern fiefdom, he has never served in a national government.

After campaigning for Socialist prime minister Michel Rocard as a youth, he switched to the right, becoming a close ally of centre-right former prime minister Alain Juppé.

The German-speaking father of three, who writes crime novels in his spare time, was elected to parliament in 2012.

Juppé on Monday praised him as “a very talented man”.

His appointment is a further blow to the Republicans, who have been trying to regroup after the presidential vote and prevent defections to Macron’s camp.

Republicans secretary-general Bernard Accoyer said there were no immediate plans to expel Philippe from the party but that he would have to “clear up the ambiguity” about his loyalties.

Some in the party have argued in favour of an alliance with Macron.

Around 20 MPs on Monday issued a statement urging the Republicans and centre-right UDI to “accept his outstretched hand”, saying the right needed to “take the full measure of the political transformation taking place before their eyes”.

But his year-old party faces a battle for seats, with the Republicans, Le Pen’s National Front, the radical left and other losers of the presidential election all plotting revenge.

Leftist firebrand Jean-Luc Mélenchon said that Philippe’s appointment as premier showed the right had been “annexed” by the tentacular Macron.