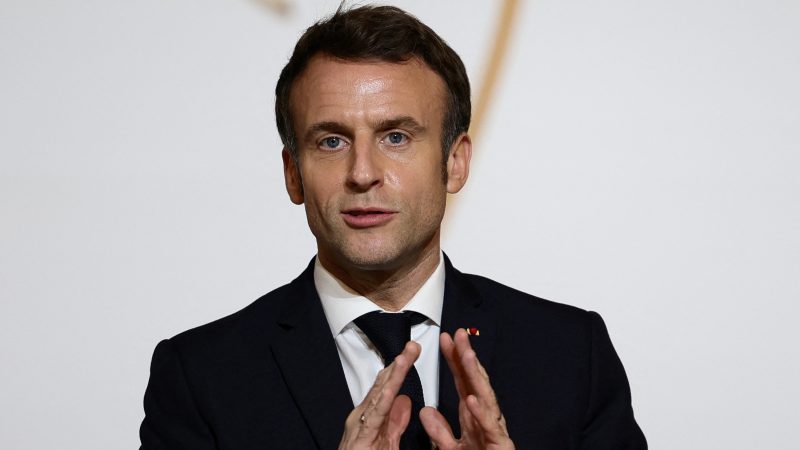 President Emmanuel Macron said he would push Europe to “engage in international competition” on space issues – describing it as a central issue for European sovereignty. [EPA-EFE / POOL]

President Emmanuel Macron indicated Tuesday (1 February) he plans to keep the French waiting before confirming he will seek a second term in April elections, saying dealing with the crisis over Ukraine and coronavirus comes first.

Just over two months before the first round of voting, Macron is the sole major candidate yet to declare while his rivals are already deep in intense campaigning.

There is little doubt Macron will stand — he has himself said that he wants to — but the nationwide campaign will only begin in earnest once the 44-year old incumbent throws his hat into the ring.

“I have already said that I have plans and spoken of the passion and the love that I have for our country”, he told the La Voix du Nord newspaper in an interview on the eve of a visit to northern France.

“But, for now, I am consumed by overcoming the acute phase of the epidemic and the height of the current geopolitical crisis.”

He said that plunging into the campaign now would betray a promise he made to be president “until the end”, at a time when “we have a crisis on the Ukrainian border which threatens our collective security.”

Macron has been working intensely to bring about a de-escalation in the crisis between Russia and Ukraine, holding telephone talks with President Vladimir Putin twice in recent days.

He also revealed in the interview he may travel to Germany for the second time in 10 days to discuss Ukraine with his Germany and Polish counterparts.

Macron is widely tipped to win a second term, but analysts have cautioned the outcome of the two-round poll is far from a foregone conclusion, with many voters yet to make up their minds.

He is not unusual among incumbent French presidents in keeping the country waiting before formally seeking re-election.

Right-winger Jacques Chirac waited until 70 days ahead of the polls in 2002 while Socialist François Mitterrand in 1988 declared with just 33 days to go. Both went on to win a second term.

Centrist Macron’s rivals have accused him of electioneering, saying that he is using his office to make media appearances and defend his record without being seen as candidate.

Government spokesman Gabriel Attal denied the delay was a tactic.

“I don’t think it’s an advantage for us, quite the opposite. Maybe it’s a handicap not to be able to be in the campaign right now while the opposition is,” he told Franceinfo radio.

France also holds the rotating presidency of the European Union, with Macron keen to use the time to press his agenda for boosting the military and diplomatic clout of the 27-member bloc.

Aides to Macron have also argued against an announcement in the short term.

“There’s a window of opportunity for him to declare his candidacy between 10-20 February,” one presidential aide told AFP on condition of anonymity.

But there has also been intense movement behind the scenes, including the launch by supporters of a website, avecvous2022.fr, which appears to be a campaign platform.

A new poll out on Monday by the Ifop-Fidicial survey group suggested that Macron would win the first round of the presidential election on 10 April with 25.5% of the vote.

Far-right leader Marine Le Pen and conservative Valerie Pécresse from the Republicans party are seen as competing for the other spot in the second-round run-off scheduled for 24 April.