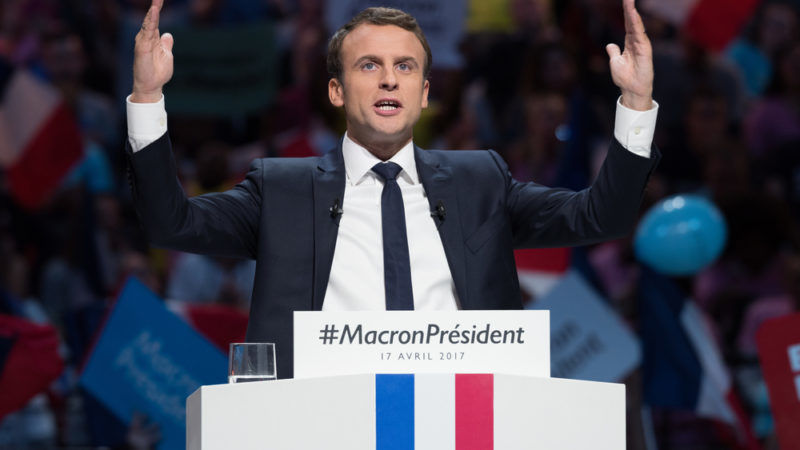 Macron promised a to devote 0.5% of GDP to development aid. The question of how remains. [Frederic Legrand/Shutterstock]

Ahead of the 2019 EU elections, Macron’s Republique en Marche (REM) party is torn between creating a new political group in the European Parliament or sitting with the centre. EURACTIV France reports.

Coalition or solo ride? After Macron’s tour of France, the upcoming European parliamentary elections in 2019 have provided a new impetus to REM, the president’s party.

This vote takes places every five years in all countries of the bloc. And since 1976, three large parties or “groups”, as they’re called in Brussels, dominate the assembly: the European People’s Party (EPP), the European Socialist & Democratic party (S&D), and the Alliance of Liberals and Democrats for Europe (ALDE).

The latter, closer to Macron’s REM, hasn’t received any formal application from REM.

On paper, political relations are quite real: Macron is close to Belgium’s Prime Minister Charles Michel and his Luxembourg counterpart, Xavier Bettel – whose parties are both affiliated with ALDE.

During the presidential campaign, REM’s alliance with centrist political party MODEM – itself a member of ALDE group – had strengthened the links between Macron and Guy Verhofstadt’s group.

But the affiliation is far from certain. “Regarding ALDE, [affiliation] will not happen automatically. We are more progressive than liberal. We want to speak with everyone,” said Arnaud Leroy, one of REM’s directors.

“For the 2019 elections, we want to disrupt the European political game like we did in France. We are more inclined towards creating something ex nihilo,” he explained.

REM’s ambition at the European level could prove harder than in France. “In France, we didn’t have a centrist party. But in Europe, there is less room for manoeuvre. Achieving what Macron did in France will be more difficult at European level”, said a European political source.

For now, contacts with different parties are multiplying in Belgium and the Netherlands, or with a part of the German socialists (SPD) and Greens, the Ciudadanos Party in Spain, and  Renzi’s movement in Italy.

And it’s with the last one that things could work out. “If Matteo Renzi wins the next elections in Italy, this could change Macron’s game,” said a Brussels source.

The issue of alliances will have to be dealt with quickly. Macron has promised a “real campaign” for the European elections and the procedure of choosing a group leader or Spitzenkandidate forces EU groups to find an agreement on who to nominate months in advance.

In 2014, European parties chose their candidates for the presidency of the European Commission ahead of the vote. And Jean-Claude Juncker, the EPP’s candidate, became EU chief after the centre-right won the majority of seats.

For 2019, ALDE’s president Guy Verhofstadt could once again run for the liberals. The decision will have to be taken by the end of next year. But for the moment, REM does not reject the option of presenting its own candidate “against Verhofstadt”, explains Arnaud Leroy.

“It is not easy to find people who are known at the European level – there is a real notoriety issue,” REM’s official admitted.

Other political figures, like the chief Brexit negotiator, Frenchman Michel Barnier, could tick all the boxes. “He has the confidence of a president and we remain quite open as we already have Republican ministers,” said Arnaud Leroy.