French President Emmanuel Macron looks on as his predecessor leaves the Elysee presidential palace at the end of their handover ceremony and prior to Macron's formal inauguration. Paris, 14 May. [Patrick Kovarik/EPA]

French President Emmanuel Macron’s party is set to win as much as a third of the vote in legislative elections next month, giving it a solid majority, two polls showed on Wednesday (24 May).

Macron’s Republic On The Move (LREM) would win 33% of the vote in the first round of voting on 11 June, an Elabe poll for BFM TV found.

A separate Ifop Fiducial poll for Paris Match magazine, CNews TV and Sud Radio found 31% of those surveyed planned on voting for LREM.

That was up from up from 22% the last time the poll was conducted on May 4-5, before Macron was elected president in a runoff vote against far-right leader Marine Le Pen on May 7.

In the Elabe poll, 20% of those surveyed said they would vote for the conservative Republicans party, which was seen winning 19% of the vote in the Ifop poll.

That would be just barely ahead of Le Pen’s National Front, which was at 19% in the Elabe poll and 18% in the Ifop poll. 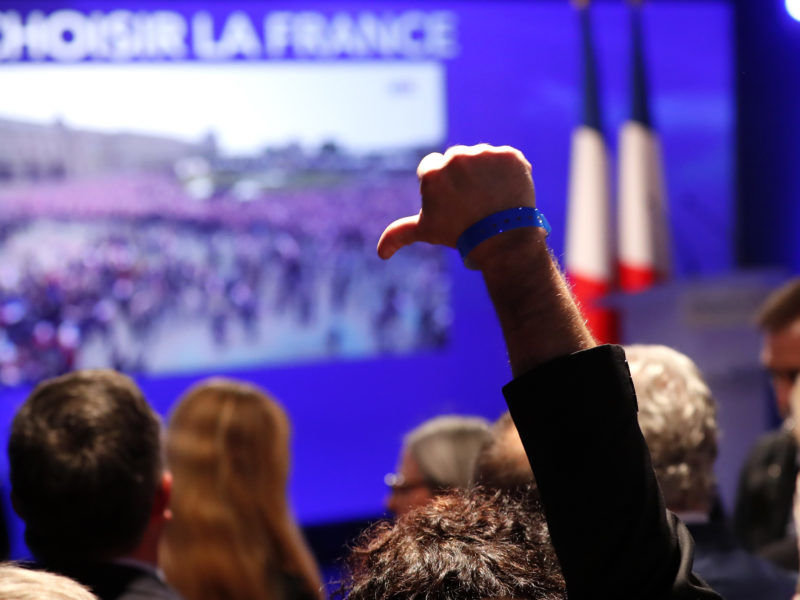 The far left France Unbowed party was seen winning 15% in the Ifop poll and 12% in the Elabe poll.

In both cases, that was well ahead of the Socialists at about 7%, far behind the 29.5% they won in the last legislative election in 2012, giving them a majority with their allies.

Neither poll offered an estimate of how many seats parties could win in the second round of voting on 18 June.

Meanwhile, French unions urged President Emmanuel Macron on Tuesday (23 May) not to try to hustle through his labour reform plans this summer, in contrast with calls from the main employers’ group for swift measures to reinforce rising business optimism.

Macron’s meetings with unions and employers were a first crucial test of his commitment to carry out labour reforms which he sees as vital to reviving an economy bedevilled by high unemployment, but which are opposed on the left.

Just one year after making his big political gamble, Emmanuel Macron was elected president of France with more than 65% of the vote on Sunday (7 May). EURACTIV France reports.