Leader of the Five Star Movement (M5S), Italian Deputy Premier and Labor Minister Luigi Di Maio, gets into his car at the end of the meeting with the staff of his party, in Rome, Italy, 26 August 2019. [Claudio Peri/EPA/EFE]

Wednesday (28 August) is D-Day for fraught negotiations to form a new Italian government, failing which the eurozone’s third largest economy will be forced to hold fresh elections.

President Sergio Mattarella is to meet the country’s main political parties at the climax of what Italian newspapers have dubbed “the craziest crisis ever” after the government collapsed earlier this month while parliament was on holiday.

The anti-establishment Five Star Movement (M5S) and the centre-left Democratic Party (PD) have been trying to create a new workable coalition, despite having been bitter enemies until just a few weeks ago.

After a day of rollercoaster talks Tuesday, the two sides appeared on the brink of a clinching a deal. They are set to meet again on Wednesday. 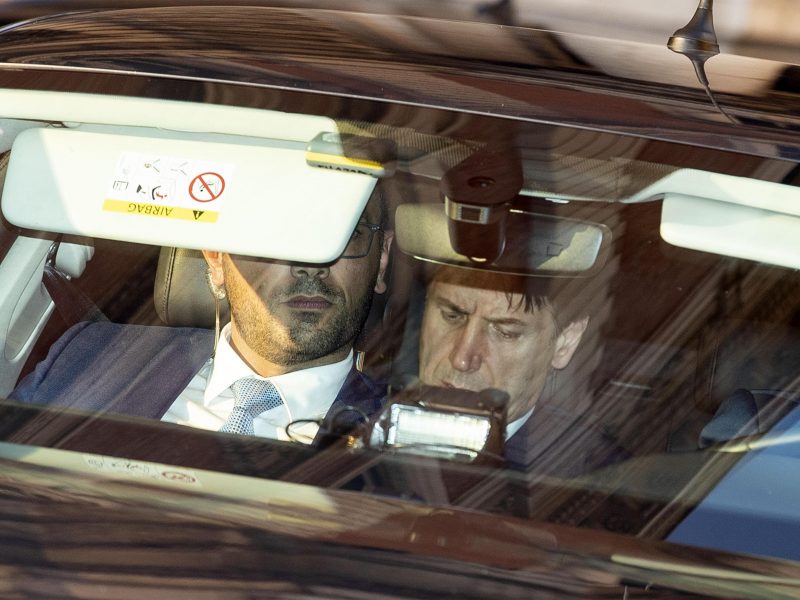 Italy's PD, 5-Star on verge of government deal with Conte as PM

The Movement’s leader Luigi Di Maio said late Tuesday that should a deal be reached it would still have to be voted on by M5S members in an online poll that would take place before the end of next week.

“Only if the vote is positive will the M5S support the proposed government project,” he said.

The clock is ticking to ease the political turmoil, with Italy under pressure to approve a budget in the coming months.

If it fails to do so it could face an automatic rise in value-added tax that would hit the poorest families the hardest and could plunge the debt-laden country into recession.

All of Italy’s main parties have been summoned to report back to Mattarella on Wednesday.

He has insisted the crisis be resolved quickly, though he could give parties a bit more time for last-minute wrangling.

With Milan’s FTSE Mib closing up Tuesday and the spread — the gap between German and Italian bond yields — falling, investors and markets appeared to have faith a deal would be done.

If the PD and M5S cannot form a solid majority, the president is expected to call an early election for November.

A return to the polls will likely favour strongman Matteo Salvini, head of the far-right League, who triggered the crisis on 8 August when he withdraw his party from the governing coalition with M5S.

Salvini has said he hopes Mattarella will not allow the “horse-trading to go on much longer”, accusing the PD and M5S of spending their time “negotiating ministries” rather than working out a plan for the country.

A key sticking point in the PD-M5S courtship appeared to be what cabinet role to offer the Movement’s leader Luigi Di Maio, who held the deputy prime minister and economic development minister posts in the moribund coalition.

Sources in the PD were quoted by Italian media as saying Di Maio wanted the deputy prime minister post in a new coalition — something the centre-left party has so far ruled out.

The parties bickered Monday and Tuesday over whether outgoing Prime Minister Giuseppe Conte should lead a new coalition, with the PD initially insisting they wanted a fresh cabinet line up.

But the centre-left party appeared to have had a change of heart — news which cheered not only the M5S but also US President Donald Trump, who enthusiastically gave Conte his endorsement on Twitter.

Starting to look good for the highly respected Prime Minister of the Italian Republic, Giuseppe Conte. Represented Italy powerfully at the G-7. Loves his Country greatly & works well with the USA. A very talented man who will hopefully remain Prime Minister!

The softly-spoken former academic, who was chosen as a compromise prime minister by Salvini and Di Maio last year, has also received praise from European Council president Donald Tusk for his loyalty and “great sense of humour”.

EU's Tusk praises ousted Italian PM Conte: "He was always extremely tough when defending Italian interests but at the same time very responsible in reaching European solutions…He was and is one of the best examples of loyalty, responsibility and has a sense of humour also"