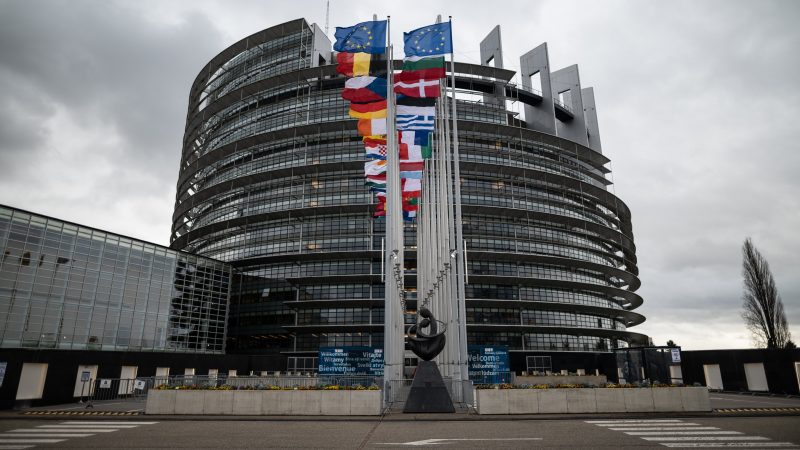 File photo. European countries' flags and the European Union flag fly in front of the 'Louise Weiss Building', the seat of the European Parliament, in Strasbourg, France, 11 February 2020. [EPA-EFE/PATRICK SEEGER]

Hundreds of European lawmakers and staff travel to Strasbourg next week for the European Parliament’s first session since the COVID-19 pandemic struck, though many think it is too early to return.

Temperature checks, masks, a French curfew and multiple health tests await them, with a mandatory quarantine upon their return to Belgium if they are away for more than 48 hours.

Rasa Jukneviciene, a Lithuanian centre-right lawmaker, said in a letter to David Sassoli, president of the assembly, that the return to Strasbourg is too hasty and put staff at risk.

“The requirement for the returning staffers to undergo a quarantine of at least seven days confirms the projected health risk for them, their families, and the society,” she wrote.

Witold Wasczykowski, a Polish EU lawmaker from the European Conservatives and Reformists Group, said the best way to protect staff from the virus was to cancel the trip.

Iratxe Garcia, president of the Socialists and Democrats, parliament’s second largest group, said earlier this week it would have made more sense to wait until July.

A member of another grouping said the quarantine on return had made the trip unpalatable.

Under EU law, parliament must hold 12 sessions per year in the French city, but it last decamped in February 2020. Critics complain at the €114 million per year cost, but the city and French President Emmanuel Macron have long sought the lawmakers’ return.

Around 2,500 people typically travel from their Brussels bases for three-and-a-half days per month to debate and vote on draft laws.

Sassoli, the parliament president, has declared “force majeure” during the pandemic to hold the assembly in Brussels, but determined that the improving health situation and acceleration of vaccinations no longer justified this.

Still, many lawmakers will be able to “attend” the session remotely and the parliament’s secretariat will only send one third of the people who would normally go. Most staff, in any case, are advised to work primarily from home.

In Strasbourg, meals will have to be eaten outside until Wednesday. France’s 9 p.m. curfew also means there will be no late meetings or drinks to unwind.