Daniela Vincenti in Berlin, with EURACTIV Germany and EURACTIV France 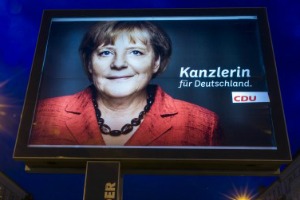 Chancellor Angela Merkel posted a resounding victory in Germany's general election yesterday (22 September), while her coalition partner, the Liberal FDP, was ousted from parliament by not reaching the needed 5% threshold.

Merkel Christian Democratic Union (CDU) and sister party the Christian Social Union (CSU) won more than 42% of the vote, a level not seen since 1990, the first poll after German reunification.  However, the result was still a few votes short of an absolute majority leaving Merkel needing a coalition partner to govern.

The Free Deomcratic Party (FDP) suffered its greatest defeat since 1949, beaten by the Green Party (8.4%) and the former communist Left Party (8.6%). The recently formed eurosceptic movement Alternative for Germany (AfD), which advocates withdrawal from the euro currency, took 4.7% of the votes.

In a televised speech, Angela Merkel, who will govern for a third term, said it was "a super result".

“I see the next four years in front of me and I can promise that we will face many tasks, at home, in Europe and in the world," added Merkel, who has led Germany since 2005.

Speaking to EURACTIV in the CDU headquarters in Berlin, CDU MEP Elmar Brok greeted the result saying that Merkel had won her biggest mandate yet. “These elections were Angela Merkel’s elections,” he said.

Even though the result represents a clear endorsement of Merkel’s leadership during the eurozone crisis, the 59-year old chancellor may now need to embrace political rivals who have criticised her at every turn. She will most likely need a "grand coalition" government with the Social Democrats (SPD) or the Greens, with the latter  less likely option.

Most Germans prefer a CDU/CSU and SPD grand coalition, according to the polls.

Negotiations to put together a grand coalition, however, could last weeks, observers say. The SPD might demand the finance ministry or insist on a nationwide minimum wage. Both the Greens and the SPD call for a more redistributive tax system, with breaks for lower income families and increases for the wealthy.

But a grand coalition led by Merkel would not be as stable as the one that was put in place during her first mandate in 2005. The SPD would join the governing coalition and then likely leave in one or two years to join the Greens and the Left party, according to Karl-Theodor zu Guttenberg, the former German defence minister now a researcher at the Centre for Strategic and International Studies.

FDP loses for having 'served the big banks'

The big surprise of these elections was the mediocre result of the Liberals. The FDP posted its lowest score since it entered the Bundestag in the 1949 election, its first after the second world war.

"This election outcome is a bitter blow for a party which has worked so hard to keep Germany's economy on track and to safeguard the freedoms of its citizens. The FDP will be much missed in government. But Liberalism is often most rejected when it is most needed," said the leader of the European liberals (ALDE party), Graham Watson.

"The FDP must now think long and hard about how it can regain the initiative with Germany's citizens by offering a broader-based menu of Liberal answers for the challenges the country faces," Watson added, hinting at the EU elections next year.

Centre -left MEP Jo Leinen told EURACTIV that the party paid the price of pursuing policies to please lobbying interests rather than the common good. “They have given too much the impression of serving big banks and big industry,” he said in a phone interview.

The AfD, a eurosceptic party founded only this year, did not win enough support to be represented in the Bundestag, but barely with 4.9%.

“The AfD did not make it. This shows Germany is not a country for populism,” added Brok.

The stark warning that Merkel and her finance minister gave in the days preceding the poll seems to have paid off.

Before the poll, Wolfgang Schäuble had indeed repeated that anti-EU sentiment threatened the region’s progress.

“These people claim: 'We’d be better off economically without the euro’,” he told the weekly Die Zeit. “That claim is totally wrong, has no credibility and is extremely dangerous for our prosperity.”

Even though the eurosceptic party did not get into the parliament, the fact that they have managed to get such results in less than a year since their birth is worrisome.

“It is a frightening good result for a party that did not exist six months ago,” Leinen said, adding that it showed that Merkel had not succeeded explaining the eurozone crisis to the electorate.

According to Leinen, even though they had not reached the Bundestag they would get into the European Parliament as their threshold of 3% is lower than than that of the general elections.

Whatever the outcome of the coalition negotiations, MEPs on the left and the right agreed that the result would be good for Europe.

“The EU policy of Germany will more open and not just focused on austerity,” said Leinen, referring to its politics towards countries facing fiscal problems.

Whatever the coalition, the government will all push for speeding up implementation of the eurozone, leading to more expansionary economic policies in both Germany and the eurozone. Merkel’s third mandate will be more oriented toward further European integration than a CDU-FDP coalition.

“The fiscal tightening is mostly done,” said Brok. “What’s needed now are structural economic changes to become more competitive, we need incentives for growth,” he added, saying that on these principles conservatives and social democrats agree.

"Germany has voted for a strong Europe and a more integrated Eurozone based on competitiveness and economic reform," the Chairman of the EPP Group in the European Parliament, Joseph Daul, commented on the result of today's Bundestag elections in Germany.

"CDU and CSU will remain a key driving force within the EPP Group in the European Parliament, and Europe at large," he added.

The President of the European People’s Party (EPP), Wilfried Martens, said that one week after the landslide victory of the CSU in Bavaria, today’s federal election result further illustrates the people’s confidence in Chancellor Merkel and the Christian democrats to continue to move their country forward.

“Throughout the economic crisis, Angela Merkel has been a strong leader and a steady hand in the efforts to put Europe back on a path towards prosperity, and her role will be vital to Europe’s continued recovery,” he added

Mats Persson from Open Europe, an independent think-tank with offices in London and Brussels campaigning for EU reform, said whatever happens this is a massive public endorsement for Angela Merkel, who has established herself as the most powerful female politician ever.

"Part of her resounding victory must also be seen as a validation of her eurozone policy – expect more of the same,” he said, adding that anti-euro Afd makes strong showing means it could become a force to be reckoned with in the European elections.

The European Union’s economic and financial challenges left the bloc in no doubt that its most populous member state is also its most politically powerful.

Yesterday (22 September 2013), 62 million Germans were called to the polls to decide in a federal election whether that power remains within its current ruling conservative coalition led by incumbent Chancellor Angela Merkel’s Christian Democratic Union (CDU), or whether to entrust it to the Social Democrats or a new coalition.

In the run up to the elections, Europe has largely remained off the agenda, despite analysts concur that her unusual spell of popular support was due to her handling of the eurozone crisis [read German elections 2013: Don’t mention Europe].