Germany’s Christian Democrats (CDU) suffered record defeats in two regional elections on Sunday (14 March) amid voter anger over a sluggish coronavirus vaccine roll-out and a party corruption scandal that has left Chancellor Angela Merkel’s party reeling as it decides who to put forward as her potential successor ahead of September’s nationwide poll.

Both of Sunday’s regional polls saw a record number of mail-in ballots, which could significantly delay the final results.

In the south-western automotive hub of Baden-Württemberg, the Greens led by incumbent state premier Winfried Kretschmann won 30.9% of the vote and the CDU 22.9%, according to projections based on early results for broadcaster ZDF.

In neighbouring Rhineland-Palatinate, the centre-left Social Democrats (SPD) led by incumbent state premier Malu Dreyer were returned as the largest party with 34.2% of the vote. The CDU, which had topped opinion polls in the state until last month, secured just 26%.

“This is not a good election evening for the CDU,” the party’s general secretary, Paul Ziemiak, told reporters after the exit poll results.

But he sought to put the defeat down to the “personal success” of the victorious incumbent Green and Social Democrat state premiers, rather than a failure of the CDU.

“In a crisis, we saw that the voters trusted the governing leaders,” he said.

Former finance minister and current parliamentary leader Wolfgang Schäuble said he is convinced that Sunday’s outcome had to do with personalities and should not be taken as an indication for September’s nationwide poll.

The buoyant Greens, however, expect their current success to last throughout the year, known in Germany as  a “super election year” due to a glut of regional polls culminating in the national election.

“This is a super start to the super election year,” said Green co-leader Robert Habeck as Sunday’s projected results came in.

The CDU has seen its approval rating tumble from 40% last June, when Germany was widely praised for its response to the coronavirus pandemic, to around 33% this month.

The party’s dismal in both polls showing will be a blow to party leader Armin Laschet, who took pole position in the race to succeed Merkel when he was elected to the leadership in January.

However, Laschet would first have to be named joint chancellor candidate for the CDU and Bavarian sister party Christian Social Union, or CSU.

Waiting to challenge him for the role is the heavyweight CSU leader Markus Söder. Second only to Merkel in nationwide approval ratings, the Bavarian state premier is positioning himself as a safe pair of hands to lead the bloc into its first election in without her since 2005.

The loss in Baden-Württemberg, where the CDU has been junior coalition partner to the Greens for the last five years, could help Söder.

Both leaders have stressed they want to settle the matter of the chancellor candidacy by 23 May. 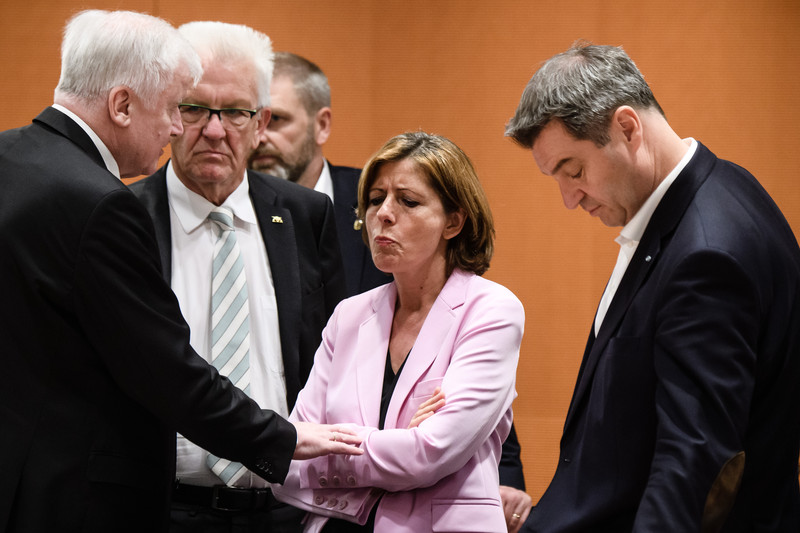 Two German states are set to vote on Sunday in regional elections seen as a bellwether for September’s national poll as Chancellor Angela Merkel’s Christian Democrats (CDU) continue to reel from a mask procurement scandal that could prove the party’s undoing.

Both results open the way for potential regional alliances of the Greens, SPD and the liberal Free Democrats (FDP), so-called traffic light coalitions, which already governed in Rhineland-Palatinate before Sunday’s election.

In Baden-Württemberg, Kretschmann now faces a choice between continuing his current coalition with the CDU, or pursuing a new pact with the centre-left. He has indicated he wants to hold talks with “all democratic parties”.

The SPD hopes the CDU’s slip in popularity could indicate the same group of parties could gain enough support to relegate Merkel’s party into opposition at the national level after September.

“It’s a good day, because it shows that it is possible to create a government in Germany without the CDU,” SPD chancellor candidate Olaf Scholz told German news agency dpa.

The silent winner of the night, however, was the thus-far struggling FDP, which reached 10.4% in Baden-Württemberg, up two percentage points since 2016, and 5.6% in Rhineland-Palatinate.

FDP leader Christian Linder said that despite their differences, the CDU and the CSU remained the centre-right party’s closest allies.

Linder, who was blamed for the failure of attempts to form a three-way coalition between his party, the CDU/CSU and the Greens after the 2017 federal election, has remained silent on whether he would be open to another try.

“This year, the cards will be reshuffled,” he said.