Merkel’s coalition partners, the Social Democrats, were also dealt shocking losses, bringing them their worst results since World War Two. Party leaders said on Sunday evening that they would leave the government and lead the opposition in the Bundestag.

The AfD, which had campaigned on the anti-Islam and anti-immigration ticket, will be the first far-right party to take up seats in the Bundestag in more than 50 years.

Merkel, SPD leader Martin Schulz and other parties’ leaders were frequently criticised for leading boring election campaigns. But the losses to the CDU and the SPD are bigger than polls predicted, and the AfD’s win marks a dramatic change in the German political landscape.

After exit poll figures were announced Sunday, Merkel admitted she was disappointed by the results. “Of course we expected a slightly better result, that’s totally clear,” she said at the CDU party headquarters.

Merkel has been chancellor since 2005, and her win will be celebrated as a sign of stability by many in Brussels. But talks on a new government could take a while.

Exit poll results rolled in starting at around 6 o’clock on Sunday evening. According to final figures that were released early Monday morning, the AfD pulled in 12.6% of the vote, making it the third strongest party in the next Bundestag. It is the first time the far-right AfD will enter the parliament. In 2013, the party scored 4.7% of the vote.

German law bars parties that receive fewer than 5% of the vote from entering the Bundestag, as a way to keep out extremists. AfD’s success marks a shift that will be emotional for many Germans.

Three other, smaller parties also picked up more votes in comparison to the 2013 election: the Liberal FDP came in at 10.7%. In 2013, the Liberals were knocked out of the Bundestag when the party scored only 4.8%. Between 2009 and 2013, the FDP was the junior coalition party of Merkel’s CDU.

The Green and Left parties also gained more voters compared to 2013. The Greens received 8.9% of the total vote, up from 8.4%. And the far-left Linke party scored  9.2% compared to 8.6% at the last election. 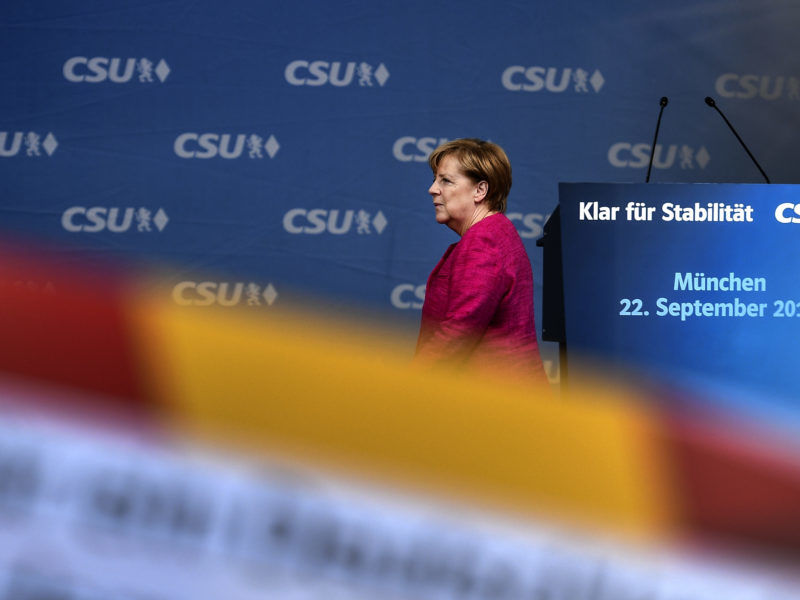 Voters head to the polls on Sunday (24 September) for a race where the winner is almost pre-ordained. This may drive a protest vote that could see the far-right AfD become the official opposition.

AfD leader Alexander Gauland appeared in front of a cheering crowd at the party’s election party and warned that the other parties should brace themselves for a feisty AfD presence in the Bundestag.

He warned that the emboldened far-right party will “hunt down” Merkel.

At the same time, hundreds of protestors gathered outside the club where the AfD held its election party on Sunday evening.

After first forecasts were released, SPD leaders announced that the party could not stay in a ‘grand coalition’ with Merkel’s CDU, but should lead the Bundestag’s opposition instead.

The announcement brings immediate consequences: without the SPD as a possible coalition partner, Merkel is boxed into a corner, and will look to form an alliance with the Liberals and Greens.

SPD politicians and supporters have suggested that the party lost support through its four-year coalition with the CDU. The Social Democrats have struggled to communicate to voters how their positions clearly differ from their coalition partner’s.

Jamaica coalition: the only option?

If another grand coalition is not on the cards, CDU leaders will look to form a three-way government, known as a “Jamaica” coalition because the centre-right, Liberal and Green parties represent the colours of the Jamaican flag. Neither the Greens or Liberals received enough votes to form a coalition alone with the CDU.

It’s a relatively untested model: there has never been a Jamaica coalition on the federal level. One version on the state level collapsed in 2012, and another Jamaica coalition was agreed in the northern German state of Schleswig-Holstein this past summer.

Thirteen percent of people who responded to that survey would prefer a CDU-Liberal coalition, the most popular option. Just over 10% want another grand coalition of CDU and SPD.

It could take weeks or months before parties agree to govern in a new coalition. In 2013, Merkel and other CDU leaders discussed with other parties for three months before forming a coalition in December.

On top of difficult coalition talks, Merkel’s party is shaken by the AfD’s victory. The CDU lost more than 1 million of its 2013 voters to the AfD, according to an ARD analysis.

Merkel called the AfD’s move into the Bundestag a “big new task” for her party.

“We want to win back the voters of the AfD,” she said on Sunday evening, standing on stage between CDU party secretary Peter Tauber and EU Budget Commissioner Günther Oettinger.

The CDU leadership will also have to confront tensions with its weakened–but roused–right wing.

The CDU’s Bavarian sister party, the more conservative CSU, lost more votes than any other party. The party received 38.1% of the vote, a drop by more than 10% since 2013.

CSU leaders have taken a hard-line approach to immigration and publicly criticised Merkel’s decision to let in around 1 million refugees in 2015. They demanded a cap on the number of refugees that Germany accepts, but Merkel and other CDU politicians so far refused to set a strict limit. CSU chair Horst Seehofer said on Sunday evening that the party suffered because it wasn’t tough enough on immigration, indicating that he may try to steer the party even further to the right.

Coalition talks over the next few weeks are likely to be difficult for the leaders from the conservative CDU and CSU, the Liberal and Green parties; they are divided over a range of issues, including immigration, eurozone integration and environmental regulations of the car industry.

Christian Lindner, the 38-year-old leader of the Liberal FDP, showed during a Sunday evening TV debate with other parties’ leaders that he could be a tough negotiator in the talks ahead.

“We’re not going to let the SPD decide who is forced into a government or not,” Lindner said, referring to the Social Democrats’ announcement that they will not join another governing coalition.

When asked by a journalist during the same TV show whether she is confident that the CDU will form a new governing coalition by the end of the year, Merkel responded that she is “generally always optimistic”. “Strength lies in peace,” she said.