More than 10,000 rally to unify Romania and Moldova 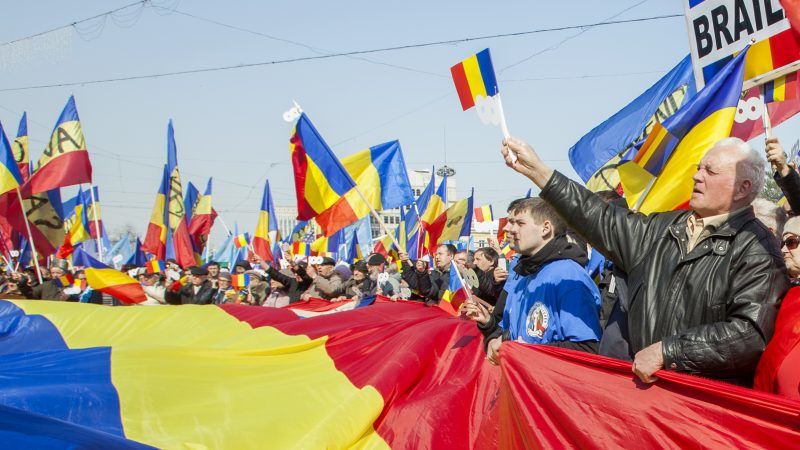 Moldovan and Romanian citizens participate at a rally to mark the 100th anniversary of the unification of Moldova with Romania, in the Great National Assembly Square in Chisinau, Moldova, 25 March 2018. [Dimitru Doru/EPA/EFE]

The former president of Romania Traian Basescu joined more than 10,000 people in the Moldovan capital on Sunday (25 March) to rally in support of reunification between Romania and Moldova.

Union between European Union member Romania and its smaller neighbour to the northeast looks unlikely but the issue highlights a divide in Moldova between pro-Western and Moscow-backed political factions ahead of elections in November.

The country that is now Moldova was part of Tsarist Russia during the 19th century and known as Bessarabia. After World War One it joined what was known as Greater Romania but it was annexed by the Soviet Union in 1940. When the Soviet Union dissolved in 1991, it became independent under the name Moldova.

It is now split between a Romanian-speaking majority and the breakaway region Transdniestria, which is propped up by Russia in one of a series of “frozen conflicts” that have kept separatist regions in several former Soviet republics under Moscow’s wing.

“We call upon the deputies of the Moldovan and Romanian parliament to vote in the near future for unification,” Basescu said at the demonstration, which was timed to coincide with the 100th anniversary of Moldova joining Greater Romania.

#Romania ex-President Traian Băsescu asks the Parliaments from Chisinau and Bucharest to vote for the Union of the two Romanian states.https://t.co/h6o8VIL7lA#Moldova pic.twitter.com/gOiMf4B9Tp

There was no official reaction from the Romanian side.

The demonstration was peaceful though police said they detained 21 people who wanted to disrupt the rally, seizing gas masks, masks and knives.

In Chisinau, #Moldova, #Romania's former president Traian Basescu encouraged the parliaments of both countries to vote for the unification of Romania and Moldova. pic.twitter.com/QuRoC56TkD

The Moldovan government, which favours closer ties with the European Union and the United States, often locks horns with the pro-Russian President Igor Dodon, who wants closer ties to Moscow and to join a Moscow-led customs union.

If his Socialist party wins elections due in 2018, Dodon has previously suggested passing a law that bans unionist organizations seen to be undermining the integrity of the state because they want to join Romania.

Dodon asked those who oppose reunification not to stage a rival rally on Sunday.

“I urge all patriots and statesmen not to march against the unionists on March 25. We should not give them an additional reason for demonstrations or provocations,” Dodon said.