New Democracy wins Greek election, but crisis not over 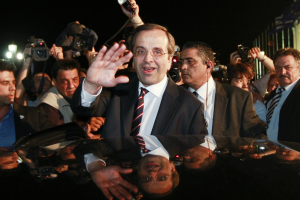 New Democracy, the centre-right political force in Greece supporting the international bailout, begins forging a government after its election victory yesterday (17 June) over Syriza, a leftist force seen by many Greeks as the defender of national dignity. Greece is under international pressure to form a government as soon as possible.

With 99% of ballots counted, New Democracy had won 29.7% of the vote, ahead of Syriza on 27%. New Democracy leader Antonis Samaras will need the PASOK Socialists, for decades Greece's largest party and now humbled by angry voters, to form a government.

The result came as a relief for Greece's EU and IMF lenders and eurozone partners who feared a Syriza victory would tip Greece over the edge and the common currency towards break-up.

A 50-seat bonus given to the party which comes first would give New Democracy 129 seats in the 300-seat parliament. Syriza will have 71 MPs, followed by PASOK with 33 MPs, ANEL or Independent Greeks (right wing, anti-austerity) with 20 MPs, Golden Dawn (extreme right) with 18 MPs, DIMAR or Democratic Left (pro-European) with 17 MPs and the Communist Party KKE with 12 MPs.

Following the announcement of the results, Samaras called for broad support over the Syriza party, which said it would cancel the aid deal agreed in March to avert bankruptcy in defiance of the country's lenders.

"There is no time to waste," Samaras told reporters in Athens as jubilant, chanting supporters waved blue party flags. "A national salvation government must bring economic growth and reassure Greeks the worst is over."

Relegated to third place in an earlier, inconclusive 6 May election (see background), PASOK said it wanted a broad coalition that would include Syriza, but that the most important goal was to form a government and put an end to political uncertainty.

The election result also brought cheers at the headquarters of Syriza. The leftists rode a wave of discontent over austerity and corruption and see second place as a victory for a party that has long been on the fringes of Greek politics.

Syriza leader Alexis Tsipras, 37, made clear his was now the main opposition party, saying it would fight on against the bailout and take power sooner or later.

"Very soon, the Left will be in power," the former communist and student protest leader told supporters in Athens after conceding defeat. "We begin the fight again tomorrow."

Greece is under international pressure to form a government as soon as possible, because it will run out of cash to pay its employees in July. Some analysts put the cost of a Greek exit from the eurozone for the European economy as high as €1 trillion.

Its caretaker government says the state has enough cash to last a few weeks and Athens has pledged to come up with an additional €11.7 billion worth of spending cuts in June to merit the next loan instalment.

The new government might get a helping hand from its eurozone peers with Germany's foreign minister suggesting Athens might get more time to implement the cuts demanded of it.

But most economists say even that would leave Greece, into a fifth year of deep recession, facing a programme it cannot hope to deliver on.

The vote revealed a society deeply split between its desire to stay in the euro and a deep-seated anger at salary, pension and job cuts that have hit the poorest while sparing a political and business elite seen by many as corrupt.

A protest vote looked set to give the ultra-right Golden Dawn party 18 seats, repeating its success of 6 May despite a now-notorious incident in which its spokesman threw water at one leftist opponent and slapped another during a TV debate.

Analysts say a pro-bailout coalition may not last, having commanded only slightly more than 40% of the vote and being pressed to make more savings from lenders.

More than two years of budget cuts have caused unemployment to jump to over 22%. Businesses are shutting down by the dozen and the homeless are multiplying on the streets of Athens.

Both New Democracy and PASOK have said they want to renegotiate the terms of the bailout to spread the burden over a longer period and take measures to boost growth.

Greece's EU partners and the International Monetary Fund welcomed the pro-bailout parties' victory, saying they were ready to work with the government that emerges. But EU officials have made clear Greece must stick to its pledges to receive more funding while hinting there may be some leeway at the margins.

"There can't be substantial changes to the agreements but I can imagine that we would talk about the time axes once again, given that in reality there was political standstill in Greece because of the elections, which the normal citizens shouldn't have to suffer from," German Foreign Minister Guido Westerwelle said.

“The Greek people have spoken. We fully respect its democratic choice. We are hopeful that the election results will allow a government to be formed quickly.

“Today, we salute the courage and resilience of the Greek citizens, fully aware of the sacrifices which are demanded from them to redress the Greek economy and build new, sustainable growth for the country. We will continue to stand by Greece as a member of the EU family and of the euro area.

“We look forward to work with the new government and to support the continued efforts of Greece to put its economy on a sustainable path.  The second economic adjustment programme agreed between Greece and the Eurogroup is the basis upon which to build to foster growth, prosperity and jobs for the Greek people. We stand ready to continue assisting Greece in achieving these goals.”

Joseph Daul, chairman of the European Parliament EPP Group, welcomed the results of the Greek elections and the tight, but clear victory, of New Democracy, an EPP sister party.

"With their wise decision, the Greek people have decided that their future lies inside the Eurozone […] The EPP Group fully supports Antonis Samaras and his efforts to form a coalition government with the participation of all the political parties that are committed to this goal.

“The positive vote, the efforts and sacrifices of the Greek people, combined with European solidarity, will soon bring the country back on to the path of economic recovery and growth", Daul said.

President of the European Parliament Martin Schulz said in a statement:

"I welcome the results of the general elections in Greece. The results show a broad and clear support in favour of Greece staying in the euro zone."

"I salute the efforts of the Greek people to overcome the crisis. They have made great sacrifices. I hope the burden of the reforms will be spread more equally to achieve greater social justice," he added.

"I hope that Greece will rapidly form a government that breaks the political deadlock and pursues the required reforms to overhaul the economy and Greek public finances. The Greek people deserve a stable and prosperous future," Schulz said.

Following an inconclusive election on 6 May, Greek parties abandoned efforts to form a government and called a new election for 17 June.

Only two political parties in parliament – the centre-right New Democracy (ND) and the Panhellenic Socialist Movement (PASOK) – support the EU-backed bailout programme and its related austerity measures, which they say have kept the country's finances afloat at the cost of massive social unrest.

However, ND (108 MPs) and PASOK (41 MPs) suffered unprecedented losses in the 6 May election, and did not have enough seats to secure a majority in the country’s 300-seat parliament, even if they had formed a coalition.

But other fringe parties – including the Neo-Nazi Chrissi Avgi party, the Stalinist KKE party, and the Coalition of the Radical Left (Syriza), which scooped a stunning second place at Sunday's elections – firmly reject the EU/IMF Adjustment Programme.

0 responses to “New Democracy wins Greek election, but crisis not over”