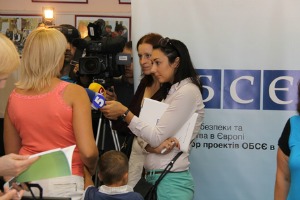 International observers to the parliamentary elections in Ukraine have accused the authorities of “abuse of power” and “excessive role of money” in the campaign, while the EU issued a more carefully worded statement.

Projections say that with results from voting in single-mandate precincts, and expected support from allies such as the Communist Party, Yanukovich’s party appears likely to lead a majority in the 450-seat parliament.

The partial results show the United Opposition of jailed former prime minister Yulia Tymoshenko in second place, with around 24%. The Communist Party was third with about 14%, followed by the UDAR (PuncH0 Party of boxing champion Vitaly Klichko at around 13%, and the ultra-nationalist Svoboda (Freedom) party at around 9%.

Many Ukrainians doubt that the vote count was fair. The daily Kyiv Post reported on a symbolic case where apparently the authorities tried to give advantage to a candidate of the Party of Regions during the vote tabulation.

A source in Ukraine told EURACTIV that an excess of bulletins had been printed, and that in many cases the authorities used the extra ballots to stuff ballot boxes.

In a written statement, Tymoshenko denounced the elections as “falsified from start to finish” and announced a hunger strike.

A monitoring team from Organisation for Security and Cooperation in Europe (OSCE), which sent more than 600 observers, criticised the way the vote had been conducted and the imprisonment of Tymoshenko.

"Considering the abuse of power and an excessive role of money in this election, democratic progress appears to have reversed in Ukraine," Douglas was quoted as saying. Douglas put much of the blame on the ruling party, which she said used state funds to finance its campaign activities while also controlling the flow of information.

"I do not think that voters should face harassment or intimidation from employers or the government. And one should not have to go to a prison to hear from leading political figures in this country," Douglas said.

Toner said Washington was “troubled by allegations of fraud and falsification in the voting process and tabulation.”

EU High Representative Catherine Ashton and Štefan Füle, the enlargement commission, were more diplomatic in a joint statement, speaking of a “mixed picture” rather than outright regress.

“The turnout shows the Ukrainian citizens’ attachment to a democratic and pluralistic society. … We take full note of the International Observation Mission’s preliminary findings on the conduct of the elections which presents a mixed picture with several shortcomings, and of the difficulties faced by the local electoral observers.

“The final assessment will also depend on the post-electoral developments, which we will watch closely. It is therefore particularly important that the Ukrainian authorities ensure a proper conduct in the coming stages of the electoral process, notably as regards the remaining vote count, tabulation of results and following up on possible electoral complaints.”

Ashton and Füle noted that prison sentences had prevented opposition representatives such as Tymoshenko and her ally Yuri Lutsenko from standing in the parliamentary elections, and called on the authorities “to address this matter and take further steps to reform the judiciary to avoid their recurrence”.

It remains unclear how the election will affect EU-Ukraine relations, which have been backsliding since December 2011 (see background).

“Our engagement with Ukraine towards political association and economic integration remains based on its respect for our common values. We are committed to continue to work towards using the full potential of our relations for the benefit of the citizens of Ukraine and the EU,” Ashton and Füle said in the statement.

The emergence of the ultra-nationalistic and anti-Semitic Svoboda party to the parliament for the first time was watched with concern by Jewish groups.

Svoboda was formed in 2004, growing out of a movement that until then had called itself the Social-National party of Ukraine.

The party has organised a march against the thousands of Hassidic Jews who arrive every year for a pilgrimage at the grave of Rabbi Nachman of Bratslav in the southern Ukrainian town of Uman.

“We are not intending to interfere in internal Ukraine affairs and its voters' decisions, but we are very concerned about the safety of Jews in Ukraine and throughout Europe in light of growing anti-Semitic movements in Europe," Rabbi Menachem Margolin, general director of the European Jewish Association, said in a statement.

Viktor Tkachuk, general director of the Ukrainian Foundation for Democracy - "People First", commented that the elections have shown the “readiness of the current president’s team to retain power at whatever cost, and also raising manipulations with the results of elections to a new, more perfect level”.

“This is the reason why the overwhelming majority of international observers registers an acceptable number of procedural violations, but knows perfectly well that the results of will expression of citizens have been essentially falsified at the level of their calculation. “This takes place in electoral commissions of different levels. The law of Ukraine "On elections of People's Deputies of Ukraine", as of 17 November 2011, became the basic manipulation tool for the formation of the loyal structure of commissions. Obviously, observers haven't noticed it.

“The West has received a political slap in the face from the Ukrainian administration. This is why, for example, the member of the German Bundestag from the CDU and the OSCE observer J. Klimke notices that "manipulations with parliamentary elections in Ukraine are a masterpiece of deception and have been carried out already before the conduction of elections".

“Consequentially - a bureaucratic trap for the European Union has been created, which will certainly push the EU to deepen the political dialogue with the current authorities of Ukraine despite the proceeding democracy backsliding on the side of the latter. There are no arguments for keeping silent. It’s ridiculous.”

The December 2011 EU-Ukraine Summit failed to initial the country's Association Agreement with the Union, largely due to the imprisonment of former Prime Minister Yulia Tymoshenko that Brussels sees as politically motivated.

The five-year long negotiations over the Association Agreement were concluded, but EU leaders made it clear that the deal would not be signed until improvements are made to the "quality of democracy and rule of law" in Ukraine.

European Council President Herman Van Rompuy also made it clear that the country's association agreement, which includes a Deep and Comprehensive Free Trade Area, would not be signed until the parliamentary elections in Ukraine due in October 2012.