"When all the lobbies are already trying to break down the door, why provide them with CETA to ram it down? "summarised former Minister for the Ecological and Inclusive Transition Nicolas Hulot. [Julien De Rosa/EPA]

Prime Minister Édouard Philippe said on Tuesday (4 July) it was time to end France’s addiction to easy public spending, promising to cut expenditures over the next five years and rein in debts he said were at an unacceptable level.

New President Emmanuel Macron regards taming spending and reducing its budget deficit as key to winning the trust of European Union partner Germany and persuading Berlin to embark on reforms to shore up the bloc.

“Who really believes this situation is sustainable?”

The government and its programme comfortably won a vote of confidence. The lower house, dominated by Macron’s Republic on the Move party, voted 370 in favour of the government with only 67 voting against – mostly far-left and far-right lawmakers.

Some 129 people abstained, with a large number of conservatives from the Republicans party not opposing the government. In total, 566 lawmakers voted.

Philippe’s talk of austerity comes just as other major economies such as Germany, the United States and even Britain are signalling an easing of fiscal policy to underpin growth.

But last week France’s independent auditor revealed a more than €8 billion funding shortfall in this year’s budget, forecasting a deficit once again above the EU cap of 3% of national income.

Philippe, a relatively unknown conservative before he was picked by Macron, said his objective was still to haul the deficit below the EU’s cap this year and he would target cuts in spending by three percent of national income over five years.

However, in a sign of how Macron and his government are having to re-adjust the timing of tax cuts after the extent of the budget overshoot was revealed, Philippe announced a year’s delay to a key campaign promise.

He said the centrist government would convert the last Socialist government’s flagship “CICE” tax credit for companies into a permanent reduction in payroll charges in 2019.

Some opponents said Macron should take responsibility for government finances since he served as economy minister from 2014-16 under his Socialist predecessor François Hollande.

“Mr Macron … won’t kid anyone that he wasn’t responsible too,” said Christian Jacob, head of the conservative Republicans Party in parliament.

Philippe acknowledged that a record high abstention rate in June’s parliamentary election meant his government would have to tread carefully with its social and economic reform agenda, but that France could not ignore its problems.

“No one takes this majority as a blank cheque,” the prime minister said in a more than hour-long speech that ranged from climate change to Britain’s planned departure from the EU and was peppered with applause.

In a dig at US President Donald Trump ahead of this week’s G20 summit, Philippe said that people who turn their backs on the Paris climate change deal showed “more than just a simple misunderstanding of the world that is coming”.

“The ostrich is without doubt a nice animal, but putting your head in the sand has never prepared anyone for the future.”

On Europe, Philippe stressed Macron’s stance that any talks with Britain over its future relationship with the EU would only come after orderly negotiations over its exit from the bloc.

“Conducting orderly negotiations over the United Kingdom’s exit will be a prerequisite for the future relationship’s framework,” Philippe said.

Macron on Monday (3 July) made clear his impatience to complete the reshaping of France’s political landscape. He wants to reform institutions, including cuts to the number of parliamentarians and introducing a degree of proportional representation. 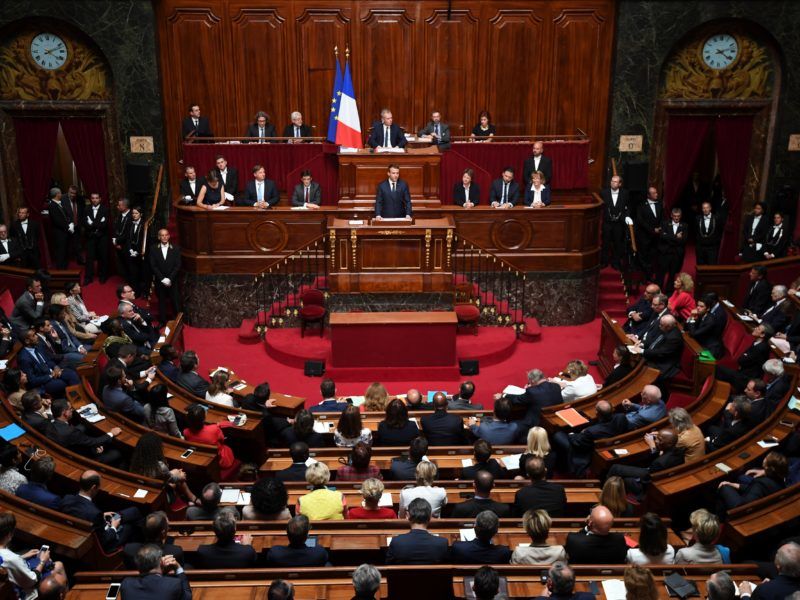 French President Emmanuel Macron said on Monday (3 July) that after a “cruel decade” of crisis-management, European Union leaders needed to reform the bloc to fight Euroscepticism among the public.