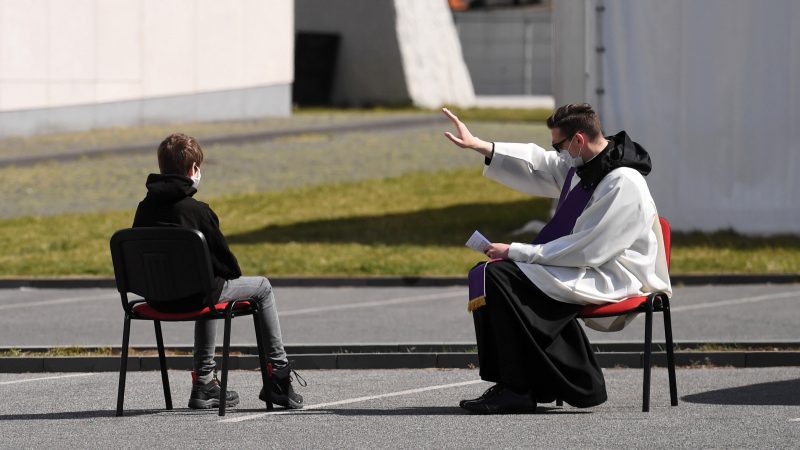 A beliver during a confession on the street next to the Temple of Divine Providence on Good Friday in Wilanow, Warsaw, Poland, 10 April 2020. [Piotr Nowak/EPA/EFE]

Poland will gradually lift lockdown measures imposed to contain the new coronavirus from Sunday, the government said on Tuesday (14 April) as the nation prepares for a presidential election on 10 May.

The ruling nationalist Law and Justice (PiS) party has said it wants to ease the economic pain from the pandemic, with restrictions on public life costing Poland some 10 billion zlotys (€2.21 billion) every day or two.

Several countries in Europe, including Poland’s neighbour, the Czech Republic, have decided to relax restrictions on society as the daily growth of new infections has slowed. In Poland, the daily rise in new COVID-19 cases has held roughly steady in April after a jump in March, with a dip over Easter.

Czech beer gardens to resume on 25 May

The Czech government will allow stores and restaurants to reopen gradually over the next two months to reawaken an economy paralysed by the coronavirus lockdown, officials said on Tuesday (14 April).

As of Tuesday, Poland had reported 7,049 confirmed cases of the coronavirus, and 251 deaths, much fewer than other nations in Europe, though testing rates in Poland have also been low.

Authorities said the initial easing of restrictions would allow certain shops to reopen, with details to follow. “We are slowly unfreezing the economy, I think this is good news,” Health Minister Lukasz Szumowski told private radio broadcaster RMF FM.

New restrictions to minimise contagion from the virus are also being put place, however. From Thursday, Poles will have to cover their faces with masks or cloth scarves when in public.

Last week, authorities extended school closures until April 26 and restrictions on businesses until April 19. Limits on air and rail transport have also been extended and Poland’s borders will remain closed until May 3.

The government’s decision to proceed with the presidential election is contentious, with PiS arguing it must be held on time out of respect for democratic procedure and the opposition accusing PiS of sacrificing public health for political gain.

Opinion polls show incumbent President Andrzej Duda, a PiS ally and longtime frontrunner, rising in popularity with some showing him taking more than 50% of the vote, enough to win without having to compete in a second round on 24 May. But surveys also indicate voter turnout could be as low as 30%.

PiS has said its plan to hold a postal ballot instead of at voting booths, already approved by the PiS-dominated lower house of parliament, the Sejm, would ensure it is safe for the public.

“I don’t think we are seeing the politics of fighting coronavirus or supporting the economy, but rather political action linked to preparing for the elections,” Adam Szlapka, a member of the centrist and liberal opposition alliance.

Věra Jourová, the European justice commissioner who has rebuked the eurosceptic PiS over judiciary reforms seen by Brussels as anti-democratic, has said parliament’s steps to change the electoral code were rushed and Poles would not be fully informed about postal voting.

“The EU needs very serious reforms and changes,” said Kaczyński. “I am certain that the ongoing crisis related to the (coronavirus) will make the EU’s weakness clear to many and will highlight the importance of individual nation states.”

PiS has long called for a reform of EU institutions to return more powers to member states from Brussels, which it believes fails to respect national values.