A man holds a banner with Law and Justice (PiS) leader Jaroslaw Kaczynski during a protest organized by opponents of the judicial reform, in front of the Polish Senate headquarters in Warsaw, Poland, 25 July 2018. [TomaszGzell/EPA/EFE]

Since winning an unprecedented majority in 2015, the Law and Justice (PiS) party has been on a collision course with the EU over its long string of judicial reforms that critics charge pose a threat to democracy.

But the PiS insists the reforms tackle corruption and overhaul a judicial system still haunted by Poland’s communist era.

“The elections are a test for the major parties in large cities and regional councils ahead of the European elections (in May) and next year’s parliamentary elections,” Stanislaw Mocek, a political scientist with Poland’s Academy of Sciences, told AFP.

Riding a wave of popularity driven by robust economic growth and generous social spending, the PiS stands to make gains in regional councils but is very unlikely to dominate them. 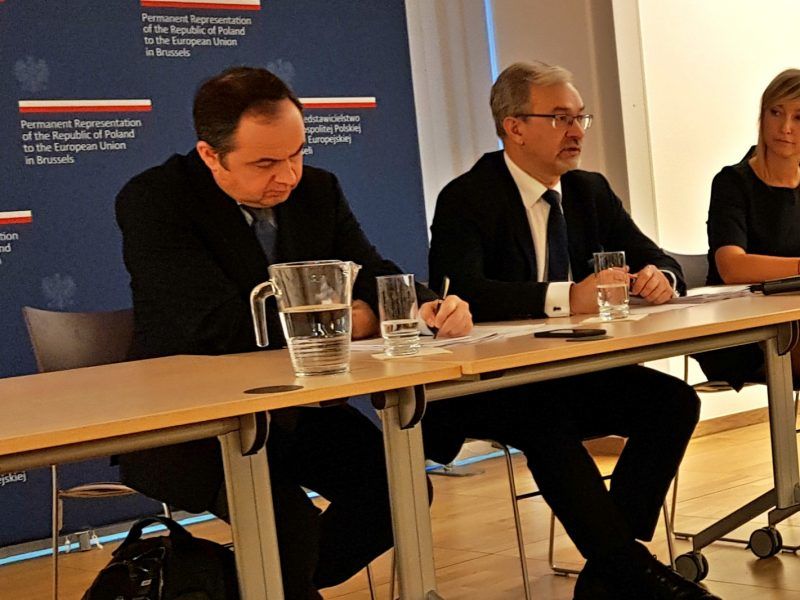 Registering to vote in Warsaw, an elderly actress who declined to be named, told AFP she was a “nationalist, so I’m pro-PiS”.

She said she voted “no” in Poland’s 2003 referendum on EU membership and minced no words criticising liberals associated with the Civic Platform (PO) opposition as a “gang” that “sold Polish factories to foreigners for a pittance” after communism fell in 1989.

But the PiS’s disputed judicial reforms have also galvanised critics who insist they are unconstitutional and pose the greatest threat to democracy in Poland since it shed communism in 1989.

“One word is enough to explain why I won’t be voting for the PiS: the Constitution,” Leszek Czepirski, a chemistry professor from the southern city of Krakow, told AFP.

Polls show that the PiS has a slim chance of winning in cities during two rounds of voting that starts this Sunday and ends on 4 November.

Senior PiS figures like Kaczyński and Prime Minister Mateusz Morawiecki have crisscrossed the country in recent weeks to lend local candidates their clout by promising voters they can count on the central government in Warsaw.

Younger PiS politicians Patryk Jaki and Malgorzata Wasserman are leading the charge in the capital Warsaw and the southern city of Krakow against liberal and left-leaning incumbents.

At 33, Jaki is currently Poland’s deputy justice minister. His campaign for an “honest and ambitious Warsaw” targets outgoing liberal Mayor Hanna Gronkiewicz-Waltz, who has been dogged by allegations of corruption in the reprivatisation of Warsaw properties confiscated by the communist regime after World War II.

He is running against liberal Rafal Trzaskowski, a 46-year-old former minister and member of the European Parliament who is campaigning for a “Warsaw for all” in a bid to bridge the polarising rhetoric of the PiS.

Opposition politicians accused the PiS this week of using scare tactics after it ran a campaign ad insisting that the PO would allow an influx of migrants and refugees should its candidates win.

Jaki defended the video, telling Poland’s commercial RMF radio station: “I’ve visited the West, and I don’t want something to blow up here as has been the case in many other cities. If you elect Trzaskowski, you have no guarantee that this won’t happen.”

In the countryside, the PiS is struggling to pull ahead of the Polish People’s Party (PSL), a group that has dominated rural areas for decades.

The stakes are high: local authorities play a key role in the distribution of EU farm subsidies and regional development funds for long-neglected in rural areas.

Experts believe that Kaczyński can count on the support of the powerful Catholic church to convince traditionally religious rural voters to back the conservative PiS.

Polling stations are open from 0500 GMT to 1900 GMT on Sunday, with a run-off vote due on  4 November in cities and towns where no one wins an absolute majority.