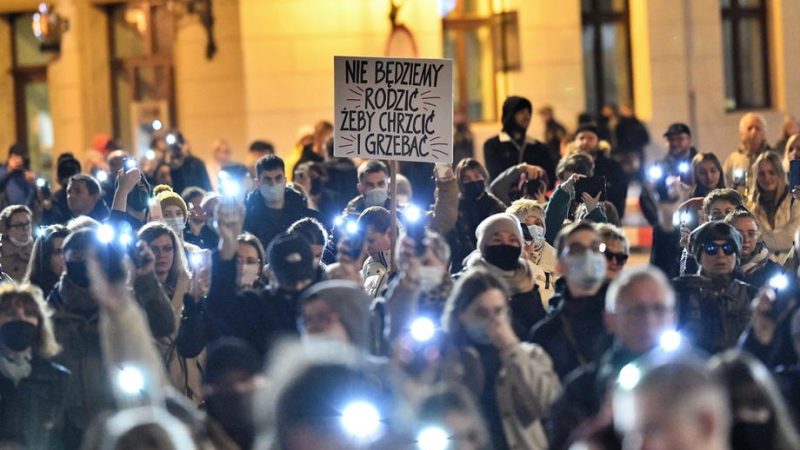 A protest under the slogan 'Not one more' in Wroclaw, south-west Poland, 6 November 2011. Protests against the new abortion law, which banned terminations in cases of foetal defects, sparked all over the country under the slogan 'Not one more', after the death of septic shock of a 30-year-old pregnant woman from Pszczyna. [EPA-EFE/Sebastian Borowski]

Tens of thousands of people demonstrated Saturday (6 November) in Warsaw and dozens of other Polish cities to denounce a nine-month-old abortion law blamed for claiming the life of a pregnant mother, organisers said.

The 30-year-old woman died of septicaemia in a Polish hospital after her 22-month-old foetus died in her womb, the family’s lawyer Jolanta Budzowska tweeted.

She was, she added, the first victim of the near-total ban on abortion.

Izabela, married for 10 years and a mother of a nine-year-old child, agonisingly described her worsening condition in text messages made public since her death in late September.

“Not one more,” shouted thousands of demonstrators in the capital Warsaw who protested outside the Constitutional Court and the health ministry.

“I am here to make sure that no woman’s life is put at risk any more,” Ewa Pietrzyk, a 40-year-old Warsaw resident, told AFP as she held a photo of Izabela. “The current legislation is killing women.”

Women’s rights groups said they organised similar demonstrations in around 70 other Polish towns and cities.

Izabela’s family issued a statement saying doctors at the hospital in the southern town of Pszczyna “took a wait-and-see attitude,” which it attributed to “the rules in effect limiting the possibility of a legal abortion”.

The pregnant mother recalled the limbo she was in with a baby she said weighed 485 grammes, just over a one pound, according to text messages that were made public.

“For now, thanks to the law on abortion, I must remain lying down,” she said.

“And there’s nothing they can do. They will wait until (the baby) dies or until something starts, and if not, I can, great, expect septicaemia,” Izabela wrote in a text to her mother.

“My fever is increasing. I hope that I don’t have septicaemia, otherwise I will not make it,” the pregnant mother said.

According to the nationalist government running the country, the woman’s death had nothing to do with the new law.

Two doctors at the hospital in Pszczyna were suspended after Izabela’s death, and the town’s prosecutors have launched an inquiry. 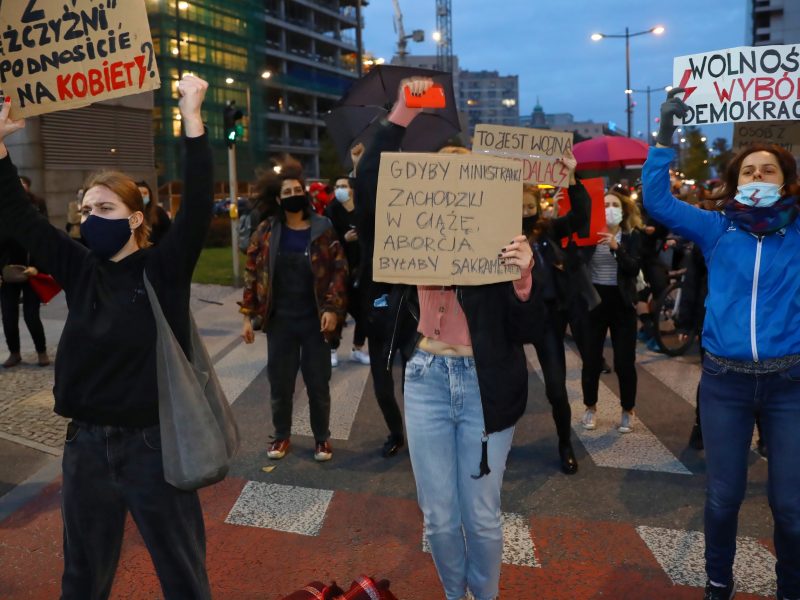 Thousands of people took to the streets of Poland for a fifth straight day of protests against a constitutional court ruling that would impose a near-total ban on abortion in the EU country.

This resulted in a further tightening of already heavy restrictions on abortions, which came into effect in late January.

Rights group say that several thousand women have sought their help to seek abortions, more often that not abroad.

In October, a coalition of 14 rights groups including Amnesty International and Human Rights Watch said that as a result of the court ruling “women, girls, and all pregnant people have faced extreme barriers to accessing legal abortions”.

The NGOs called on the European Commission to immediately implement a mechanism that could see Poland denied funds from Brussels for not respecting “EU values”.

The Constitutional Court, which the EU says has had its independence stripped away, is currently at the centre of a separate row with Brussels after a controversial ruling earlier this month against the supremacy of the bloc’s laws.