Conservative-backed independent Ingrida Simonyte — who oversaw biting austerity cuts during the global financial crisis — narrowly won round one on May 12 with 31.13% of the vote compared to 30.95% for fellow economist Gitanas Nauseda, also running as an independent in his first bid for public office. 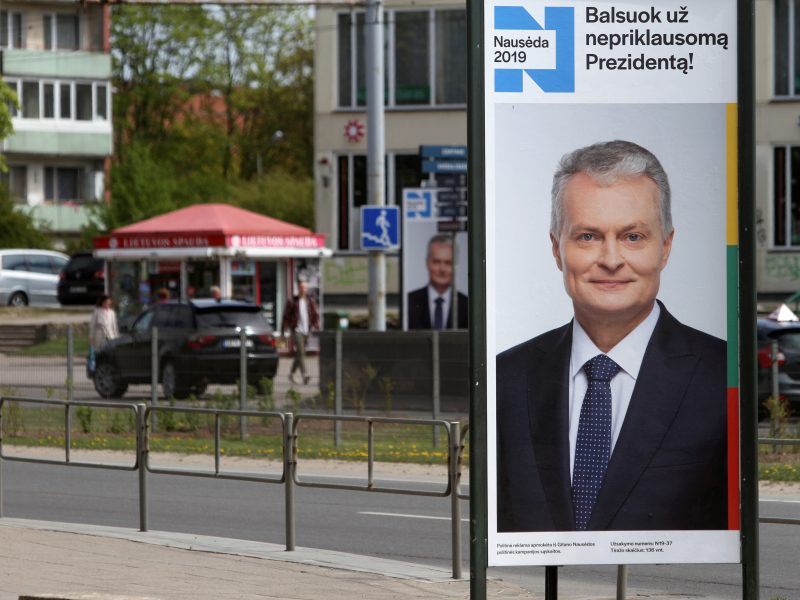 An economist and political novice, Gitanas Nauseda, took the lead in the first round of Lithuania’s presidential election on Sunday (12 May) and will face Ingrida Simonyte, a conservative ex-finance minister, in a 26 May runoff coinciding with the European elections.

No opinion polls are expected ahead of the vote coinciding with European parliament elections, but analysts expect Nauseda to prevail.

Nauseda in pole position ahead of presidential election runoff? https://t.co/EWqmlRH6G8

“Nauseda has better chances because of his wide appeal to the electorate across the ideological spectrum,” Ramunas Vilpisauskas, director of the Vilnius-based Institute of International Relations and Political Science, told AFP.

For Linas Kojala, head of the Eastern Europe Studies Centre, Nauseda is more likely to capitalise on Lithuania’s “tradition of independent presidents who rise above party politics.”

Experts also note that by choosing two pro-EU, centre-right candidates, Lithuanians who see the European Union as a source of prosperity and security have bucked eurosceptic and populist sentiment sweeping the bloc.

The rivals are vying to replace popular incumbent President Dalia Grybauskaite, a 63-year-old independent who cannot run for a third consecutive term.

Dubbed the “Iron Lady” for her hard line on Russia, Grybauskaite is tipped as a possible to be the next European Council president.

The post of President in Lithuania is important also because the head of state represents the country at EU summits.

Although Lithuanian presidents do not directly craft economic policy, bread and butter issues have dominated the election.

Lithuania is struggling with a sharp population decline owing to mass emigration to Western Europe by people seeking better opportunities.

Both candidates have pledged to bridge the rich-poor divide in the nation of 2.8 million where, despite solid economic growth, almost 30% are at risk of poverty or social exclusion, notably in rural areas.

Growth is forecast at 2.7% this year, above an average of 1.1% in the 19-member eurozone, but income inequality is still among the highest in the EU.

Both are regarded as trusted economists with similar ideas about fighting poverty by boosting taxation and spending.

A 55-year-old former bank advisor, Nauseda has campaigned as a non-partisan “candidate of the nation” above political feuds and regional affiliations.

Decades of TV appearances as an economic expert have made him a household name reputed for his intelligence and moderation.

Critics, however, argue his platform is too vague and see his political inexperience and business links as liabilities.

Simonyte, 44, who swept the capital Vilnius in round one but trailed Nauseda in most of the regions, has vowed to “resist populism” and sought to highlight her political experience.

As finance minister during the global financial crisis she saw the economy shrink by nearly 15 percent, a decline that took a high toll on low-income earners.

“I’ve been tested in a difficult situation and I’m more predictable when it comes to taking decisions at critical moments,” she insisted.

But Simonyte’s experience also appears to be her key electoral handicap.

“I oppose Simonyte for her pension cuts during the crisis,” said Vilnius pensioner Anele Lijuniene, who called Nauseda “a decent, elegant person and a strong economist.”

A viral video of Simonyte celebrating her round one victory by dancing to Metallica’s “Whiskey in the jar” heavy metal anthem has highlighted her appeal with younger voters.

“Simonyte has a human face. She isn’t talking through her hat,” Laurynas Mazuolis, a 42-year-old taxi driver in Vilnius, told AFP.

Lithuanian presidents steer defence and foreign policy, attending EU and NATO summits, but while they have veto powers they must consult with government and the prime minister to appoint senior officials.

Both candidates firmly support EU and NATO membership as bulwarks against neighbouring Russia, especially since Moscow’s 2014 military intervention in Ukraine.

According to expert Kojala, the next president will have to tackle issues including Lithuania’s position on EU-US disagreements, security concerns tied to Chinese investment and whether to forge closer ties with neighbouring Belarus.