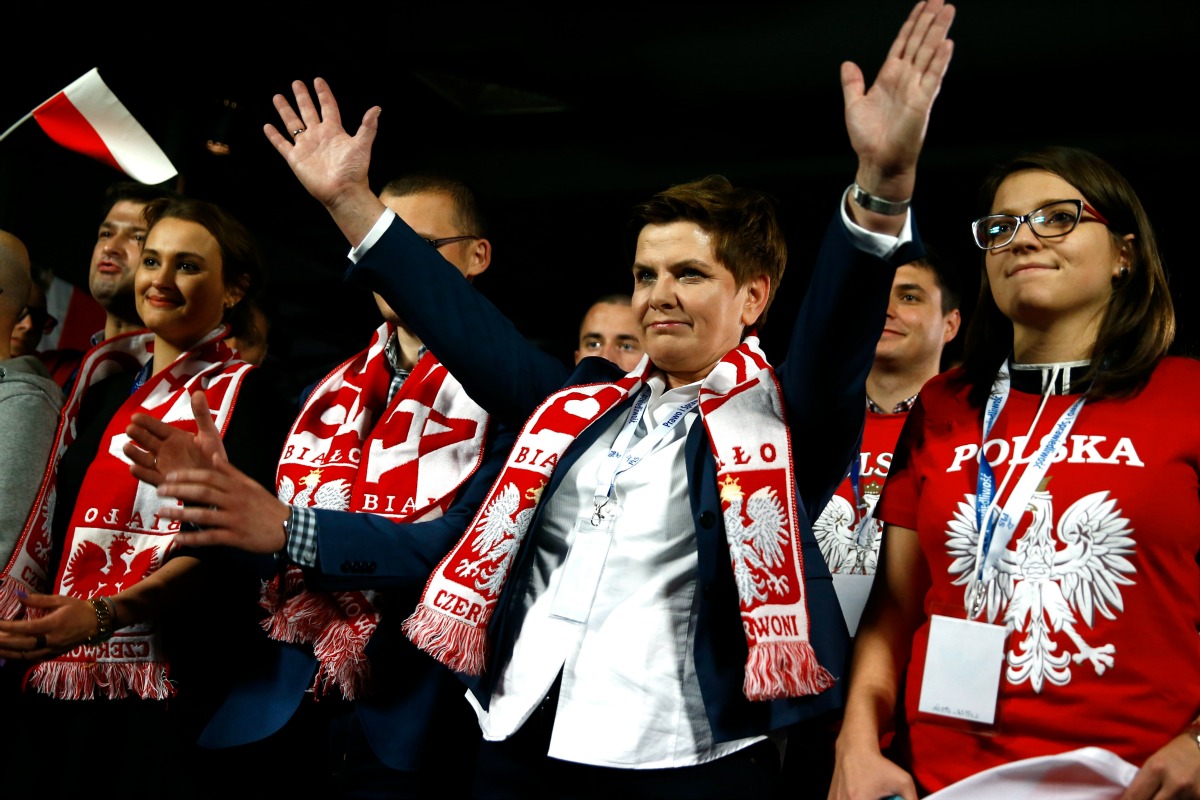 Beating drums, miners parade a coffin for Poland’s centrist government through the gritty streets of Ruda Slaska, a mining town left behind by a quarter century of explosive growth since Communism’s demise.

The union wants Poles to “vote for anyone but the PO” in Sunday’s general election.

Insisting “the government tricked us”, 35-year-old Pawel, a miner and father who declined to reveal his surname, says he will vote for PO’s arch-rival, the Law and Justice (PiS) conservative opposition.

Surveys show he is not alone. With promises to boost welfare, and fiery rhetoric about about Europe’s migrant crisis, the populist-oriented PiS commands a 10-point poll lead over the liberal pro-European PO, and may even end up governing alone.

Most likely Prime Minister is a woman

The woman most likely to become premier, PiS candidate Beata Szyd?o, is a miner’s daughter from the nearby coal town of Brzeszcze.

The promises target core PiS electorates in the poorer east known as “Polska B” and public sector workers. Critics warn they could destabilise public finances.

Despite eight years of deft economic management “the PO wore itself out”, says political scientist Professor Radoslaw Markowski, noting an eavesdropping scandal that did irreparable damage.

Capturing part of the spoils, retired punk rocker Pawel Kukiz, whose presidential bid scored a surprise 20% support, could steer his anti-establishment Kukiz’15 party into parliament. Analysts tip it as the PiS’s most likely coalition partner.

Other parliamentary contenders include the United Left, the Nowoczesna (Modern) liberals, the PSL farmers’ party ? the PO’s current junior coalition partner ? the libertarian Korwin group, and Razem (Together), a new leftist group.

Short of upholsterers, it created a popular YouTube rap video promising young Poles jobs and the “good life” without having to follow the 2.3 million economic migrants who left, mostly to Britain or Germany, since Poland’s 2004 EU entry.

With 170 workers, and focused on the Western European market, the company is part of the huge crop of small and medium-sized businesses that sprang up after Communism.

Casting a suspicious eye on the populist-oriented PiS, business-owners became a bastion of support for the liberal PO. It fares best in prosperous western Poland, known as “Polska A”.

“Poles are rather prone to populism and empty promises, especially before election day,” says Tombea manager Slawomir Banasiak, worried what a PiS government might do for the business climate.

Meanwhile, the PO promises continued growth, with a 3.5% expansion expected this year and next, and improved wages.

Kaczynski insists Poland should financially support EU efforts to tackle the crisis, but not take in refugees. Surveys show nearly 60% of Poles share his views.

When PiS last held power in 2005-7, Kaczynski was premier in tandem with his twin, late president Lech Kaczynski.

The period was marked by internal political turmoil, spawned by their combative style and international tensions triggered by eurosceptism and anti-Russian views.

Lech Kaczynski died in a presidential jet crash in Smolensk, eastern Russia, in 2010.

Jaroslaw and PiS deputy leader Antoni Macierewicz insist he was “assassinated”, despite investigations blaming pilot error for the crash, which claimed 96 lives.

Sunday’s election is “about whether liberal democracy will survive in Poland,” warns Professor Markowski.

“If PiS end up governing alone with an allied president, Poland will become another Hungary.”