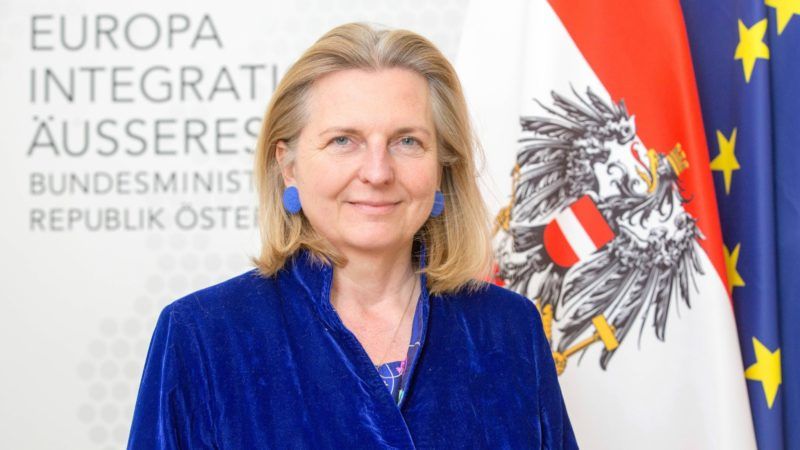 However, Kneissl will have a limited portfolio as Chancellor Sebastian Kurz plans to shift responsibility for some European Union issues from the Foreign Ministry to his office to assure member states of his government’s pro-European intentions.

While she has never been a member of the far-right party, she was its candidate for the post it sought as part of the party’s coalition agreement with Kurz and has been outspoken about some EU politicians and their immigration policies.

The coalition was sworn in on Monday, making Austria the only western European country with a far-right party in power.

Speaking on Friday, before the coalition was officially announced, Kneissl evoked the legacy of Bruno Kreisky, a towering figure of post-war politics, who governed Austria from 1970-83 and helped the country punch above its weight.

“In taking over the Foreign Ministry as an independent at the invitation of the chief of the Freedom Party, I see (leader) Heinz-Christian Strache thereby reviving a tradition from the era of Bruno Kreisky,” Kneissl told Reuters in a brief interview.

Kreisky is considered perhaps Austria’s most successful Socialist leader, and a figure who parlayed a small country’s neutrality into a major moral and political role on the world stage.

“Kreisky was aware of the importance of diplomacy as a way of positioning Austrian interests abroad. Not just representing (them) but really positioning.”

Kneissl, who was described of having an “encyclopaedic knowledge of world affairs” by a diplomat in Vienna who asked not to be identified, is considered pro-European in general.

But the 52-year-old has sharply criticised the EU’s handling of the influx of migrants since 2015 and called the bloc’s deal with Turkey to limit migration “nonsense”. She has indicated sympathy for an independent Catalonia and called the German government’s EU policy “unworldly”.

In an article she wrote for Austrian tabloid Kronenzeitung shortly after the British referendum vote in June 2016 to leave the bloc, she called EU Commission President Jean-Claude Juncker, a “cynic of power”, “loutish” and “arrogant”.

“He acts as if he was Brussels’ Caesar, who has made it his goal to break agreements, if it seems useful,” Kneissl wrote in Kronenzeitung in July 2016.

In her new job, Kneissl will represent Austria’s 8.7 million people at the EU’s Foreign Affairs Council, while the chancellery will be in charge of working with the EU’s General Affairs Council, Kurz told broadcaster Ö24 on Sunday.

The Foreign Affairs Council is responsible for the bloc’s external actions including foreign policy, defence and security. The General Affairs Council deals with issues that affect more than one of the EU’s policies, such as Brexit.

Austria’s permanent representative to the EU in Brussels will get orders from the chancellery and no longer from the Foreign Ministry, Kurz said.

The chancellery will also oversee the departments coordinating Austria’s EU policy as well as the preparations for Austria’s EU council presidency in the second half of next year, Kurz said on Saturday.

But even with her wings clipped in the role, she was combative when asked about how she planned to deliver Austria’s stance in Brussels.

“Let me quote what the last social democratic foreign minister, Peter Jankowitsch, said in a toast: We have delegated Austrian diplomacy to Brussels, and foreign policy cannot consist of rubber-stamping European Union positions,” she said, without giving further details.

The fast-talking Kneissl, who owns a farm in the province of Lower Austria, worked in the Foreign Ministry under a conservative minister in the 1990s.

She left the office in 1998, “because the party politics put a glass ceiling on my professional carrier”, she told Reuters.

She partly grew up in Jordan where her father worked as a pilot for King Hussein, and studied in Vienna, Jerusalem, Amman and Washington.

In past years, she has worked as freelance journalist, researcher and lecturer, teaching about the Middle East, international law and energy issues, according to her website.

She says she can work in English, German, French, Arabic and Spanish and manages some Hungarian, Italian and Hebrew.

One response to “Power limited for Austrian foreign minister, fan of Bruno Kreisky, critic of Juncker”