Preparing for curtain calls, Merkel too busy to think about life after office 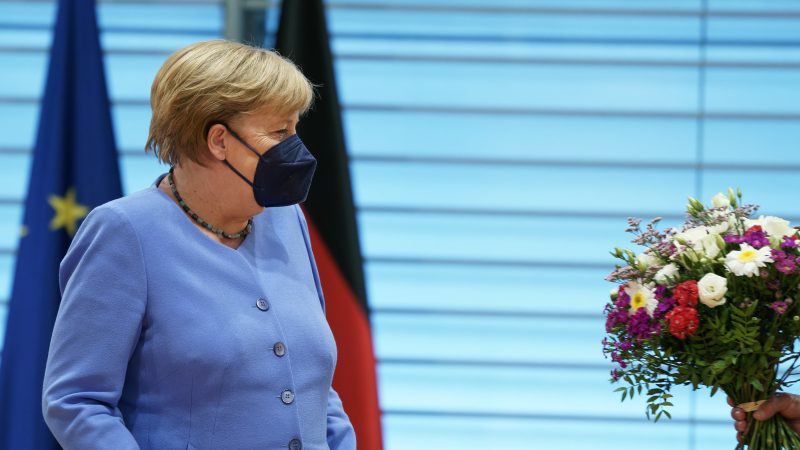 German chancellor Angela Merkel receives a flower bouquet on the occasion of her 67th birthday prior to the weekly meeting of the German Federal Cabinet, Berlin, Germany, 21 Jul 2021. [Pool/EPA/EFE]

Germany’s Angela Merkel made clear on Thursday (22 July) she would keep working on issues such as climate change till her last day as chancellor but, inscrutable as ever, gave little away about her plans once she leaves office after the 26 September election.

Merkel has led Germany for 16 years, steering Europe’s biggest economy through a global financial crisis, the euro zone debt crisis, a migrant crisis and the coronavirus pandemic, but she is not running for a fifth term.

“Every week has challenges. Look at the events we face – rising coronavirus cases, terrible floods. You can’t say there aren’t issues to be sorted out,” Merkel said at her final annual summer news conference, which yielded little hard news.

“There are demands made of me while I am in office and I will continue in that way until my last day,” said the conservative chancellor, known for her sober approach.

The 67-year old trained physicist who grew up in Communist East Germany said she had not reflected much on what she would do when she steps down.

“There is little time and space to think about the time after,” she said when asked about her plans.

In the last few weeks, she has undertaken something of a farewell tour, paying visits to the United States and Britain.

However, in a self-assured appearance in which she smiled and made a few ironic comments, Merkel hinted she may still have a role to play in the European Union’s climate protection plans, entitled “Fit for 55”.

Saying tough negotiations on this could start while a new German government was being formed, she said: “We want to make sure we have a good handover,” adding she might make a start.

Dubbed the “climate chancellor” in 2007 for championing the issue with Group of Eight leaders and for pushing through a switch to renewable energy in Germany, Merkel acknowledged the pace of change had been too slow.

“I think I have spent a great deal of energy on climate protection,” Merkel said.

“Still, I am sufficiently equipped with a scientific mind to see that the objective circumstances show we cannot continue at this pace, but that we must move faster.”

As Germany’s first female chancellor, Merkel has been at pains not to cast herself as a strong feminist. Asked about the characteristics of women in politics, she struck a typically self-deprecating note.

“There tends to be a longing among women for efficiency,” she said, adding that there were also exceptions. She said other women had done more for equality than she had, but that she had achieved something.

Merkel, a Lutheran woman in a male-dominated, traditionally Catholic party, was caught off guard when asked where she would be on election night, and stumbled in saying she hadn’t thought about it but would be in touch with her party.

She betrayed no emotion about her impending departure, merely noting: “You usually only notice what you miss once you no longer have it.”