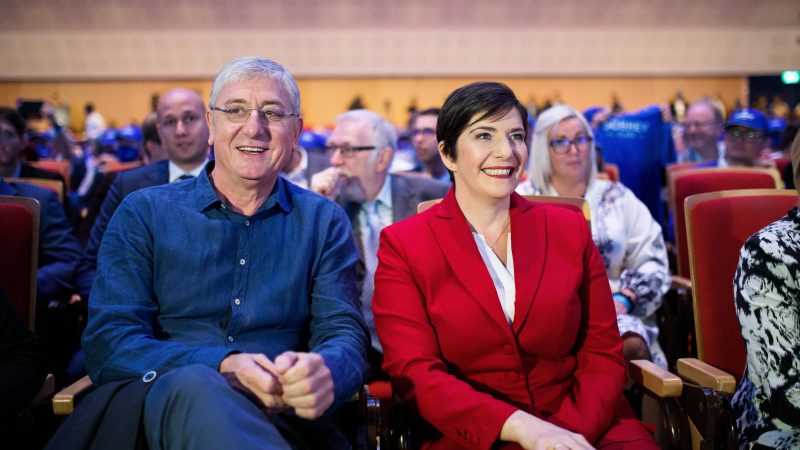 It is almost certain that one of them will step back to prevent Dobrev from winning. [EPA-EFE/Balazs Mohai]

Klara Dobrev, a 49-year-old MEP, has emerged as the front-runner in a joint opposition bid to unseat Hungary’s Prime Minister Viktor Orbán in 2022 elections, partial results of an opposition primary showed on Thursday (30 September).

Dobrev, whose candidacy would raise the prospect of Hungary’s first female prime minister, is in a close race with Budapest’s leftist mayor Gergely Karacsony, 46, who beat the ruling Fidesz party incumbent in a major upset for nationalist Orbán in a 2019 Budapest mayoral election.

Preliminary results from the first round of the primary election are expected later on Thursday.

Based on results from nearly half of constituencies, Dobrev, the leftist Democratic Coalition’s candidate for prime minister who favours closer ties with the European Union, leads with about 33.7% of the votes and Karacsony is second with about 29%.

If no candidate wins more than 50% of votes there will be a second primary round.

Bulgaria-born Dobrev, a vice president of the European Parliament, has promised to reduce poverty and work for the adoption of the euro as soon as possible. Karacsony has also campaigned on a pro-European agenda. He has promised a more just tax system and to heal political divisions.

Dobrev is the wife of former socialist Prime Minister Ferenc Gyurcsány, who lost the elections to Orban in 2009 after having been caught saying “we have obviously been lying for the last one and a half to two years”.

A patchwork of six parties that includes the Socialists, the Democratic Coalition party, liberals, and the formerly far-right Jobbik, which has redefined itself on the centre-right, has formed a united front against Orbán for the 2022 parliamentary vote for the first time since he came to power in 2010.

Orbán and his Fidesz party have been in power largely due to an election system that favours big parties. The fragmented opposition had been unable to join forces in the last three national elections.

This has changed now, giving hope to opposition voters who turned out in higher-than-expected numbers for the primary, with more than 633,000 people casting votes in Budapest and in 106 constituencies nationwide.

“I have come to vote as I want to oust this government … we have an unprecedented alliance of all opposition parties,” said Budapest resident Tamas Szabo at a polling station.

Opinion polls put Fidesz and the opposition coalition neck-and-neck, raising the prospect of the tightest election in more than a decade.