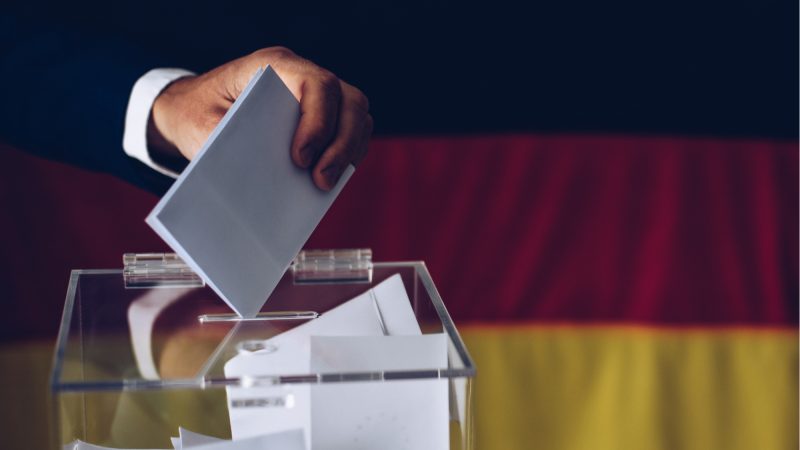 Germans head to the polls on 26 September for the first election of the post-Merkel era. [Shutterstock/Daniel Jedzura]

With veteran German Chancellor Angela Merkel set to leave the political stage after the September election, many are wondering what’s next for the globe’s fourth-largest economy. The race for Germany’s top job is heating up, EURACTIV Germany reports.

Germany’s conservative Union of the Christian Democrats (CDU) and Bavarian sister party Christian Social Union (CSU) are in a tight race with the Greens in what is possibly the first election campaign in a G7 country where climate policy has played such a dominant role.

Germany’s Greens have always been less of a fringe party than in other EU-states, in part due to the unpopularity of nuclear power. Yet recent years has seen the party break out of its traditional base and make inroads with centrist voters in the country’s conservative south.

Yet in many ways, this election is the Union’s to lose. Having fudged years of internal soul-searching for the party’s future direction and leadership in the looming post-Merkel era, they are now facing losing power for the first time since she first took office in 2005.

Current junior coalition partners, the Social Democrats (SPD), are faring even worse, having been damaged by two back-to-back stints in government with the conservatives that saw its poll ratings slump 10 percentage points, putting it behind the Greens in third place.

However, the centre-left party is at pains to remain optimistic.

“We do think the odds are good that we will appoint the next chancellor,” Udo Bullmann, the party leadership’s coordinator for European policy, told EURACTIV.

“The longer this goes on, the harder it will get for the SPD to compete at eye level,” he told EURACTIV.

The rocky road ahead

Current polls see the CDU/CSU Union in a head-to-head race with the Greens to become the largest party, gain the mandate to form a coalition government and win the chancellorship. Both parties face internal and external challenges.

The Greens are currently beset internally by a racism scandal, after expelling from the party a mayor who republished a comment containing a racial slur during a discussion on Twitter. The incident risks highlighting the Greens’ politically correct approach, which is largely unpopular with rural voters.

Externally, the party has come under pressure from sweeping climate protection legislation passed by the government after a demand by the country’s constitutional court to make emissions-cutting targets fairer for future generations.

German conservatives are also split geographically, with voters in the east feeling disenfranchised after decades of moderate leadership amid a drift towards the right characterised by the rise in eastern states of the far-right Alternative for Germany (AfD).

Beyond Germany’s borders, the election result is unlikely to be felt too keenly, said Magnus Schöller, a researcher at the Centre for European Integration Research at the University of Vienna, pointing out that both leading chancellorship candidates are pro-European.

Laschet, a close Merkel ally and Francophile with good relations with French President Emmanuel Macron, is likely to be Paris’ preferred winner.

Green chancellor candidate Annalena Baerbock, 40, who has so far not held high office, is at pains to shake off the perception she is inexperienced.

“This uncertainty is not justified. She has lots of experience, as she worked in the European Parliament, has been chairwoman of the Greens in the state of Brandenburg and led green climate policy in the Bundestag,” Green candidate Sebastian Stölting told EURACTIV.

Whoever wins, Germany’s next parliament is likely to be fragmented. The most likely coalition according to current polls is between the CDU/CSU and the Greens, though it remains to be seen which party emerges the largest and therefore has the pick of coalition partners.

Should the Greens emerge victorious, they may attempt to form a progressive government together with the SPD, shutting out the conservatives, though the parliamentary arithmetic for such an outcome looks set to be tight.

On the one hand, the Greens and the SPD could cooperate with the far-left Die Linke, which holds contentious positions on foreign policy. On the other hand, they could turn to the pro-business Free Democrats (FDP).