The state elections in Thuringia on Sunday (27 October) demonstrated how strong the AfD was among young people under 30, who voted in record numbers for the far-right party. Die Linke (the Left) came in second, while the Greens lagged far behind. EURACTIV’s media partner Der Tagesspiegel reports.

In the Thuringia elections, the Alternative for Germany (AfD) continued to seduce young voters. With 24% of the young people voting in favour of the far-right party, the AfD became the strongest force among the under-30s.

Die Linke (the Left) came in second, with 22% of the under-30s voting in the party’s favour, while the Greens only reached 11%  among that age group.

This is remarkable given that young voters voted most in favour of the Greens (23%) in the state elections in Brandenburg (one percentage point ahead of the AfD). In Saxony, 22% of the voters under-30 favoured the AfD over the Greens, which came second among that age group. 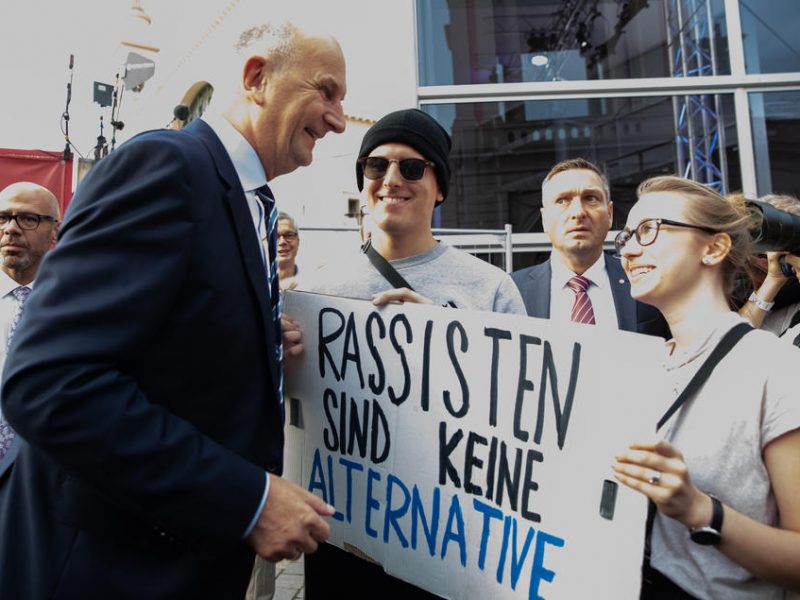 Compared to other state elections held in 2019 so far, AfD’s results in Thuringia among this age group were the best.

Until now, the Greens have been the clear winner among young people in this year’s state elections. And in the European elections in May, one-third of the voters under-30 backed the Greens, an overall result hailed as the ‘green wave’.

Greens in Thuringia were weak overall

In the 2016 state elections in Saxony-Anhalt, one-quarter of the voters under the age of 24 voted for the AfD, while 28% of the 25-34 age group backed the far-right party.

In the 2017 Bundestag elections, the AfD became the second strongest force among first-time voters in East Germany with 16% of the vote, while the CDU and Die Linke obtained 21% and 15%, respectively.

The weakness of the Greens among the young voters in Thuringia is also reflected by the overall result. And according to current projections, the Greens might not even enter the parliament.

Overall winner Bodo Ramelow, on the other hand, probably also did well among young voters because of his popularity and position as a Bundestag MP since 2014.

Even 92% of the Green voters attested that Ramelow “does his job rather well”.

What is more is that, except for climate protection, voters who support various political parties consider the Greens to be the least competent. For instance, no respondent was of the belief that the Greens are competent in the field of economy.

In Thuringia, the Greens were thus perceived as a ‘one-issue’ party. Besides, Thuringia lacks a metropolitan area, which in the past elections, had been a reliable source of votes.

The German Greens struggled to ride the wave of support it received a few years ago but, following their recent success in the EU elections, this time it looks like things could be much more long-lived. EURACTIV’s media partner Der Tagesspiegel takes a look at the state of play.

According to a survey by Infratest dimap, 65% of Thuringian voters were worried that “climate change is destroying our livelihood”. However, according to the polling agency, the environment and climate issue was only ranked fifth among the topics that are the most important to voters.

According to Forschungsgruppe Wahlen, an institute that analyses elections in Germany, the topic came in third, albeit far behind the issue of school and education.

But anyone who now thinks that young voters in particular are responsible for the increase in AfD votes is mistaken.

The AfD was also supported by 28% of the 30-60 age group, meaning that the far-right group also became the strongest force within that group.

The fact that the AfD does not end up as the election winner in Thuringia is mainly due to voters over 60, as 40% of that group voted in favour of Die Linke, while 16% of the group supported the AfD.

In the end, it was the pensioners who saved Ramelow.