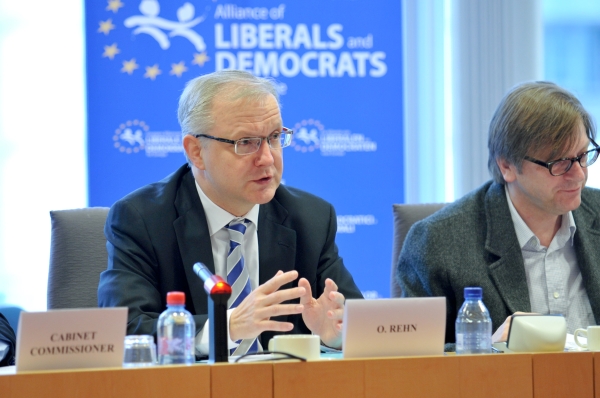 Olli Rehn, the EU's economic and monetary affairs commissioner, has secured the support of 14 liberal parties to become the frontrunner of the Alliance of Liberals and Democrats for Europe (ALDE) at next year's European elections.

Party insiders say the endorsement puts him in pole position to become the party’s candidate for the European Commission presidency seat.

The party leaders say that “it is more important than ever that we build a fairer society with a strong, liberal voice” and that “we need an ambitious yet pragmatic, bold yet responsible, liberal agenda for the European elections”.

“The ALDE Party must prioritise addressing these challenges [including financial stability, a strong economy and youth unemployment] in the next five years and choose a candidate for Commission President that can tackle these problems directly,” the letter went on.

“Olli Rehn […] has vast experience as a two-term commissioner and former MEP. His experience will be a huge asset to the ALDE Party and the European Commission,” the leaders said in the letter.

Rehn currently serves as EU commissioner for economic and monetary affairs. Earlier this month, he announced his ambition to run as the liberal’s candidate for the European Commission presidency.

Sources within the ALDE party said the endorsements are significant and raise Rehn’s chances of getting the parties frontrunner spot.

On Thursday (19 December), ALDE party leaders will gather at a meeting preceding the European Council in Brussels, where they will discuss the specifics of how to elect their common candidate. The final vote on who is be campaign frontrunner will happen at the party’s electoral congress in Brussels on 1 February 2014.

A total of 32 delegations of the different member parties (plus ALDE's youth organisation) are to vote on the candidacies and each delegation represents a number of votes according to the seats the party has in its national parliament.

Rehn has now secured a vast bloc of northern and Baltic member parties and their delegates, as well as the Croatian, German, Cypriot and Bulgarian endorsements.

His main contender, Guy Verhofstadt, the ALDE’s president in the European Parliament and former Belgian prime minister, was nominated by the Belgian, Dutch and Luxembourg member parties. After filing his official candidacy, Verhofstadt gathered additional support from member parties in Romania, Austria and other countries.

While the British LibDem party leader Nick Clegg endorsed EU commissioner Rehn, he is facing opposition from some party members led by MEP Chris Davies. The British LibDem party is one of the largest European liberal parties, but is likely to be internally split over which candidate to back in the final vote.

Verhofstadt is one of the EU’s most avid euro-federalists. In 2005, he published a book on ‘The United States of Europe’, and he is one of the driving forces behind the Spinelli Group of federalist MEPs, launched in 2010.

Last month, he faced criticism from members of the Dutch liberal party, including the former Dutch EU Commissioner Frits Bolkestein who accused Verhofstadt of “barking at the moon” and that “Europhiles pose a greater danger to Europe than eurosceptics”.

The liberal campaign frontrunner will also serve as candidate to succeed José Manuel Barroso as European Commission president. By designating frontrunners, the European parties hope to put forward their own candidate, backed by a parliamentary majority, so as to avoid a backroom selection by member states in the European Council.

So far, Martin Schulz was selected as common candidate for the Party of European Socialists (PES) and the Greek far-left politician Alexis Tsipras secured the nomination for the European Left party.

While the liberal fontrunner will face other common candidates when campaigning in the run up to May 2014, a member of that party will have only a small chance of becoming the next European Commission president.

ALDE is the third-largest party in the current European Parliament and is unlikely to surpass the centre-right EPP party or the socialist PES on number of seats in the next Parliament.

Alliance of Liberals and Democrats for Europe (ALDE)