Around 80,000 people -many of them, Romanians living abroad- demonstrated late Friday (10 August) in Bucharest, accusing the government of corruption and urging it to resign.

Police used water cannon, tear gas, pepper spray and batons to disperse the crowd. More than 450 people, including 30 police, were hurt and around 30 arrested, leading to widespread criticism.

“Until now we have received about 30 complaints, and my colleagues are interviewing those who were injured,” prosecutor Ionel Corbu said, adding “all those suspected to have acted against the law” will be questioned.

Prosecutors will also analyse video recordings of the security forces, the media and demonstrators.

Following smaller, peaceful demonstrations on Saturday and Sunday, around 2,000 people rallied in the centre of the Romanian capital late Monday as the anti-government protests continued for a fourth consecutive day. 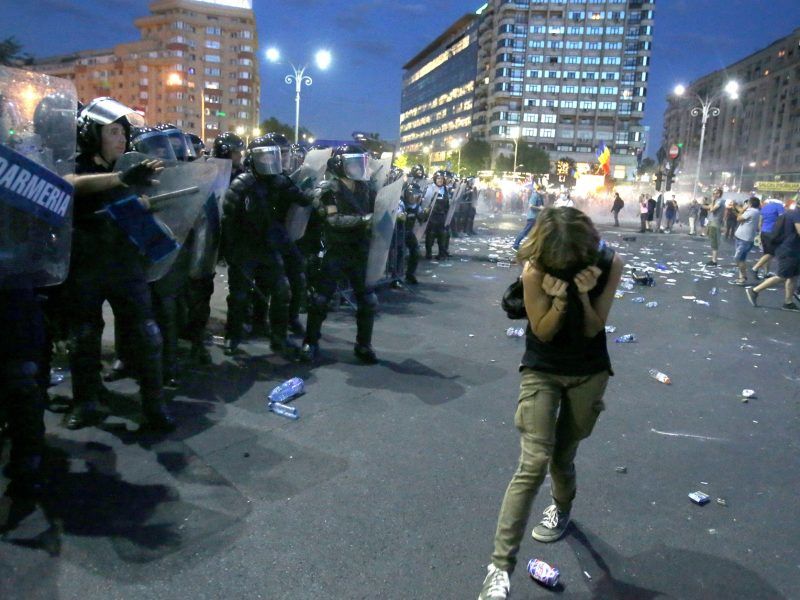 “At the end of the day, someone has to pay the taxes and levies for the good-for-nothings who are over there,” protester Catalin Gheorghe, 23, told AFP, pointing to the government headquarters.

Also Monday the Israeli Embassy said that four of its citizens were pulled out of a taxi by security forces and beaten although they did not take part in Friday’s protest and showed their passports.

“The incident is unacceptable and extremely serious. The Israeli tourists who had suffered due to the brutal intervention will file a penal complaint against the aggressors,” the embassy said in a statement.

Police have said they responded in a “gradual and proportionate” manner to violence allegedly perpetrated by “dozens of football hooligans” who tried to break the police cordon and threw rocks and water bottles at security forces.

“To attack innocent people, journalists, women and children, is inconceivable in a European state,” said Iohannis.

Romania has seen frequent protests in the last year and a half though violence is rare.

In the last 15 years, around four million people have left the country, one of the European Union’s poorest and most corruption-plagued member states with an average monthly wage of just €520.

One response to “Romania to probe alleged police violence at protest”