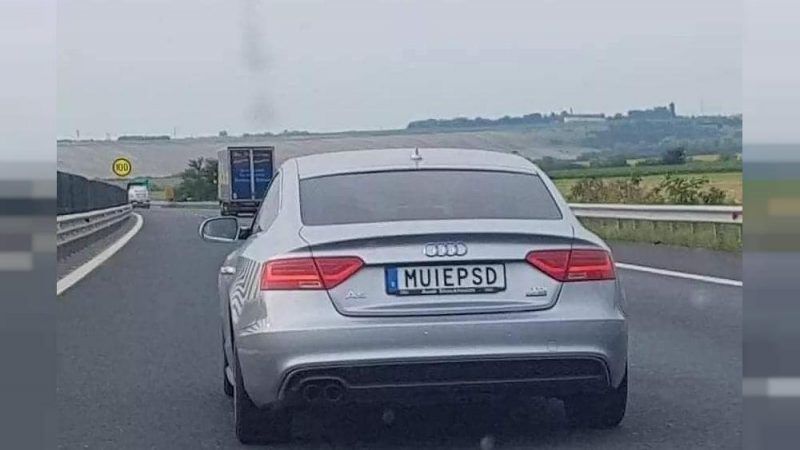 Razvan Stefanescu (45) returned home from holiday two weeks ago and made known his feelings about the ruling Social Democratic Party (PSD).

His licence plates carried an obscenity -“MUIEPSD”, which translates as “fuckPSD” – often used by anti-government protesters in Romania. Images of his vehicle quickly went viral on social media.

But the new look was not appreciated by Romanian police, which confiscated the plates and his licence, and filed a complaint against him for driving illegally.

Police had a hard time explaining the situation during a press conference, calling the case “unprecedented” and invoking an international convention, which says registration plates “shall be composed either of numerals or of numerals and letters”.

Stefanescu’s plates had only letters.

“It’s abuse. They let me cross the border and enter Romania without telling me that I was doing something illegal,” Stefanescu, who has been stopped three times since returning, told AFP.

“So when I entered Romania I was legal, and then I was not? It’s absurd… If I had a message about Santa Claus, they wouldn’t have a problem with me.”

The Swedish embassy said personalised license plates issued by Sweden were valid all across the European Union, but it was ultimately up to Romania to decide.

Romania has seen a wave of protests this year accusing the PSD, which came to power in 2016, of trying to hamper the anti-corruption fight.

The hashtag #muiePSD became viral in social media. A Romanian made a joke in Twitter saying that the German carmaker Audi will produce a special model Audi Muiepsd for the Romanian market.