Romania’s pro-Europe President Klaus Iohannis has taken a big lead in the first round of the country’s presidential election on Sunday (10 November), according to partial official results.

With votes from 90% of polling stations counted, Iohannis stands on just over 36%, with his nearest rival, former Social Democrat (PSD) prime minister Viorica Dăncilă, on 24%.

Iohannis claimed victory on Sunday evening in front of cheering supporters at his campaign headquarters.

“We have beaten the Social Democrats,” the 60-year-old leader said.

“But the war is not over, we have to take another step forward in two weeks,” he said, referring to the second round ballot on 24 November.

A Iohannis victory would potentially add to a liberal fightback against the region’s prevailing nationalism, following the election of an anti-corruption activist as Slovakia’s president and a centre-left candidate as mayor of the Hungarian capital Budapest.

Dăncilă meanwhile said she was “happy” with the result, adding: “We are present in the second round, I thank those who voted with their hearts.”

The PSD has become increasingly reliant on an ageing, rural electorate and had feared the nightmare scenario of not making it to the second round, which would have been a first in Romania’s post-communist history.

A record 650,000 votes from Romanians abroad — who tend to favour liberal candidates — will take longer to count but analysts say they will likely not be enough to knock Dăncilă out of the race.

The third-placed candidate, Dan Barna from the recently-formed pro-EU Save Romania Union (USR) party, is on around 13%.

Dăncilă served as the last prime minister in that government, which took power after the PSD won parliamentary elections in 2016.

The PSD looks to have lost 16 percentage points when compared with the 2016 election.

The PSD government had engaged in a long battle with Brussels — and Iohannis who backed the EU — over allegations it was trying to push through controversial judicial reforms in order to neuter the judiciary and benefit PSD politicians.

Iohannis had made the rule of law a central plank of his campaign.

While nationalism has been less present in Romanian politics than in Hungary or Poland, the PSD had tried to frame its clashes with European Union institutions as evidence that the party was standing up for Romania.

However, as the German magazine Osteuropa pointed out in a recent editorial, at May’s European Parliament elections “while Fidesz and (Poland’s ruling) PiS party won on the back of anti-Brussels campaigns, Romanian voters punished the government and sent a pro-European signal”.

The PSD’s heavy losses in the European polls added to a series of travails for Dăncilă’s government which eventually saw it brought down by parliament in a no-confidence vote last month.

“In the absence of a powerful leader, the party has no more strength,” says Taranu, alluding to the jailing in May of former party boss Liviu Dragnea on corruption charges.

Earlier this week MPs gave their backing to a new government led by the PNL’s Ludovic Orban. 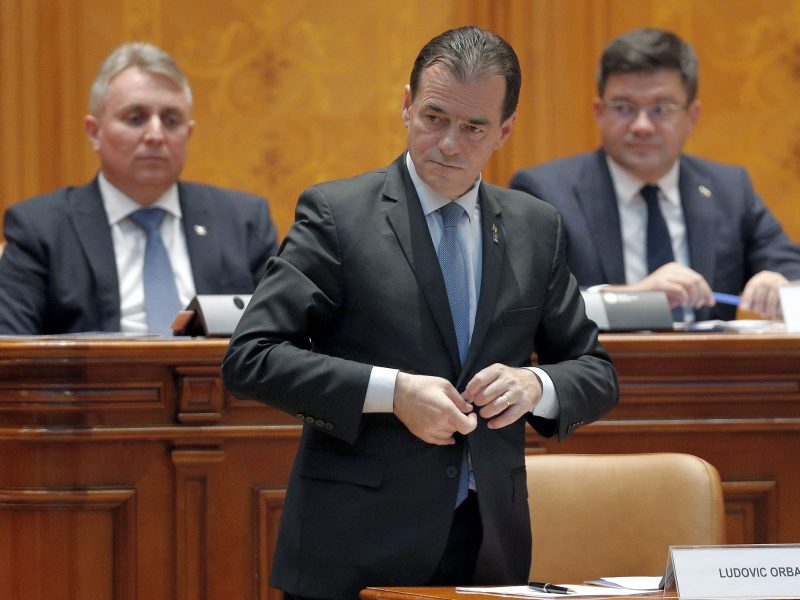 Romania’s parliament approved on Monday (4 November) a new transitional government led by National Liberal Party leader Ludovic Orban (EPP-affiliated), which will be in office until a parliamentary election next year.

Respected 103-year-old philosopher Mihai Sora, who has a large social media following, said of Sunday’s vote that “we are not just electing a man, we are electing our future”.

Sora has become the spokesman for tens of thousands of protesters who have regularly taken to the streets against the drift to the left and in favour of an independent judiciary.

Iohannis, a former physics teacher and mayor of the city of Sibiu, had warned that a PSD win would have been a threat to democracy.

The left-wing party is seen as the successor of the elite which dominated the country before the overthrow of communism in 1989 and is accused of harbouring corruption in its ranks.

Sociologist Vasile Dancu said the PSD would be “seeking a new identity” after its tumultuous period in office.

After starting strongly early on Sunday, turnout tailed off towards the evening and was estimated at 48 percent, compared with 52 percent five years ago.

In total 14 candidates stood in the first round, in the country of 19.7 million people.