Scholz: A conservative social-democrat and unexpected frontrunner in Germany 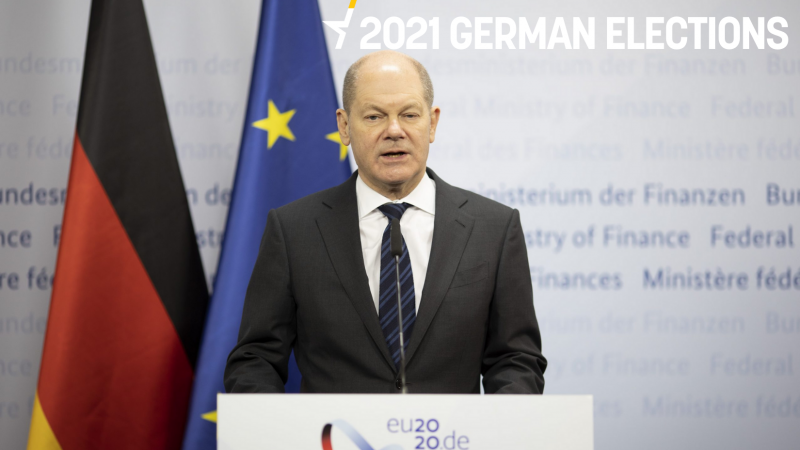 Olaf Scholz, the Social Democrats’ pick for chancellor in Germany’s federal elections, has gone from underdog to frontrunner, pitching himself as a genuine heir to the outgoing chancellor, conservative Angela Merkel. EURACTIV takes a look at his priorities and what they could mean for the EU.

Scholz’s first official trip abroad would be to Paris, he said in a TV debate in June. “The Franco-German friendship is key if we want to achieve progress for the EU and European sovereignty, and it is a good tradition.”

But he also stressed, just this week, that German leadership in the EU is key, and has made no secret of his predilection for fiscal prudence.

In June, chances that Germany’s current finance minister would be elected chancellor appeared slim and his party, the Social Democrat SPD, was trailing Merkel’s CDU in polls.

A good two months – and a number of missteps by his opponents – later, however, Scholz’s personal approval ratings are skyrocketing and a number of recent polls have put the SPD in first place.

Scholz has been making efforts to demonstrate that he is no stranger to Paris. On Monday (6 September), he visited French President Emmanuel Macron to talk about “strategic questions for the next years”, including European sovereignty, which, according to Scholz “we need in order to stay relevant in the future”.

For Scholz, this includes common procurement for defence systems. He has also called for  the unanimity rule in the EU’s foreign and security, as well as financial policy to be dropped.

In a speech to the Bundestag on Tuesday, Scholz stressed the importance of German leadership in the EU. “We have to be the country that feels responsible for joint progress in Europe and fostering further integration,” he said.

To demonstrate that he is prepared for this role, Scholz likes to point to his part in hammering out the European Recovery Fund, together with French counterpart, Bruno Le Maire, whom he also met during his recent Paris visit.

It is not clear, however, if Scholz’s Recovery Fund involvement can be taken as an indication of where he stands on European fiscal policy. As he has made clear that he sees the expansive pandemic-era policy as a one-off, it is unlikely that he would, for instance, like the EU to take additional common debt in the future.

On a national level, Scholz is known as a champion of the so-called Black Zero, or a balanced budget, a beloved fiscal tradition in Germany which he abandoned only temporarily for the pandemic recovery.

“Our approach to financial policy remains unchanged,” he said when asked by Greek newspaper Ta Nea if he thought the Black Zero would make a return after the pandemic. “We budget soundly so that we are able to firmly withstand the crisis – these are two sides of the same coin,” he added.

On the European level, the same applies to the stability and growth pact, the set of rules that EU countries have set themselves for their public finances. To enable the post-pandemic recovery, the pact has been temporarily suspended but Scholz has made clear that he does not think this should continue for longer than necessary.

His fiscal prudence is also an issue where Scholz is at odds with much of his own party. Saskia Esken and Norbert Walter-Borjans, whom the SPD elected as party leaders in December 2019 are markedly more left-leaning than Scholz.

The split between Scholz and parts of his party also extends to preferred coalition options. While the Greens are the preferred partner for most of the SPD, a two-way coalition is unlikely to muster a majority in parliament, according to current polls.

The third partner would most likely be chosen between the liberal FDP – Scholz’s preferred option – and the far-left Die Linke. The latter is preferred by the SPD’s left wing but has so far been off-limits for federal government coalitions due to its communist legacy, a perceived pro-Russian bias, and other foreign policy issues.

Scholz has not explicitly ruled out a coalition involving Die Linke but has tried to make the option sound as unlikely as possible on programmatic grounds, for example by stressing that he would need a clear commitment to NATO from any coalition partner.

The issue is being put on the agenda by the Conservatives in an attempt to discredit Scholz and win back centrist voters.

Scholz has, meanwhile, been trying to present himself as Merkel’s rightful successor, making clear that he intends to emulate her political style of pragmatism and careful balancing acts.

However, Merkel recently distanced herself from her vice-chancellor. “Under me as chancellor, there would never be a coalition with the Left Party,” she told a press conference last week, saying that this was a clear difference between her and Scholz.