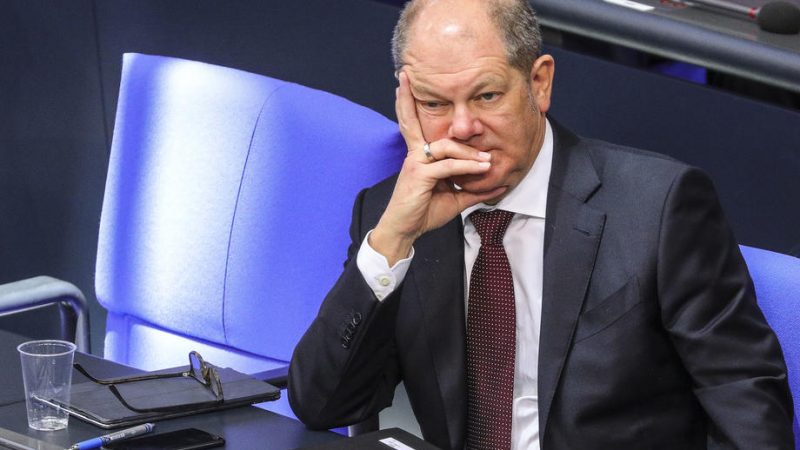 As requested by several opposition parties, Scholz appeared in front of the Bundestag's financial committee on Monday (20. September).

Finance minister and chancellor hopeful Olaf Scholz was questioned by Bundestag MPs on Monday (20. September) about investigations against his ministry’s anti-money laundering unit. His party, the SPD, deemed the hearing pure campaign tactics.

“Apparently, there is a partial legal vacuum in Germany on the issue of organised crime, of all things, due to insufficient staffing, but also due to insufficient guidance,” the liberal FDP’s finance policy spokesman, Florian Toncar, said on the sidelines of the extraordinary finance committee meeting.

Some two weeks ago, public prosecutors had conducted searches in the federal finance and justice ministries. The prosecutors accuse the finance ministry’s Fiscal Intelligence Unit (FIU) of not having forwarded suspicions of money laundering reported by banks to the police and the relevant legal authorities.

The FDP, the Greens, and the Left Party had requested the extraordinary meeting of the parliament’s finance committee in order to question Scholz on the issue.

Speaking publicly after the hearing, Scholz stressed that progress had been made during his term in office. “I made use of the opportunity to explain once again that the past three years have been the best years regarding our authorities’ capacity to fight money laundering,” he said. “We have achieved more in the past three years than in the past 30 years,” he added.

Under his auspices, the FIU’s manpower has been significantly strengthened and IT infrastructure improved, Scholz went on to say.

Lack of control over financial authorities

Opposition parties as well as members of conservative CDU/CSU, the SPD’s senior partner in government, accused Scholz of not having his ministry and its subordinate authorities under control.

“It was only at today’s meeting that Olaf Scholz met the head of the FIU for the first time,” CSU finance politician Sepp Müller said. During the hearing, Scholz had admitted to the MPs that he had never personally talked to the unit’s director before.

From the perspective of Scholz’s social democrats (SPD), it was no coincidence that the opposition parties had scheduled a hearing six days before the federal election, taking place on Sunday (26 September).

“This is indeed an issue where one has to wonder: is it still appropriate and fair in the end if a party’s leading candidate is set to be prevented from attending campaign events?”, said Jens Zimmermann, an SPD lawmaker and finance committee member.

As the scheduled committee meeting clashed with several campaign events Scholz was set to attend in Southern Germany, he had originally announced that he would only join the MPs remotely via telephone.

After the announcement had been faced with strong backlash from other parties, Scholz seemed to have changed his plans and made a surprise in-person appearance at the Bundestag.

Trying to pin down Scholz, whose party has been leading the polls for several weeks, on the financial scandals attached to his name has been a common theme of other parties’ campaigns.

“All in all, one gets the impression that Olaf Scholz is a finance minister of finance scandals: Wirecard, Warburg, and now the structural problems in combatting money laundering,” the FDP’s Toncar said on Monday.

In what is known as the Wirecard affair, the German financial market supervision had failed to detect alleged large-scale accounting fraud by German company Wirecard AG. The payment processor and financial services provider went into insolvency in June 2020, after €1.9 billion from the company’s financial statements had gone unaccounted for.

While Scholz’s finance ministry is legally responsible for the financial supervision authorities, whether Scholz is also politically at fault for the authorities’ shortfalls is a debated question. Findings presented in June by a parliamentary inquiry committee made up of members of all factions, including Scholz’s SPD, remained inconclusive on the matter.

Toncar’s “Warburg” reference, on the other hand, alluded to the so-called CumEx affair, which dates back to Scholz’s time as mayor of Hamburg.

In 2016, Hamburg’s tax office refrained from collecting €47 million in tax rebates from the Warburg Bank after the bank had allegedly been involved in illegal financial activities. While critics accuse him of having intervened in the bank’s interest, it is not proven whether, as mayor, Olaf Scholz was involved in the office’s decision.