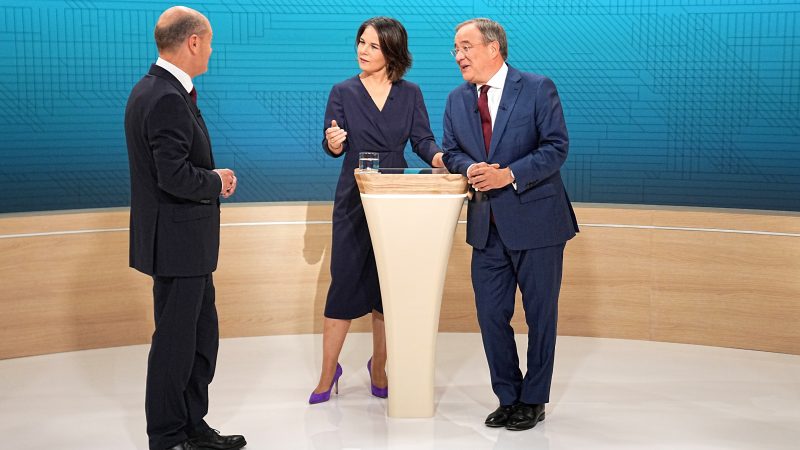 “We have been able to clarify many things in the first step, and the SPD is now ready for three-way talks,” said SPD secretary general Lars Klingbeil

With Germany set to vote in a general election on 26 September, the second TV debate on Sunday (12 September) already looked like a last chance opportunity for Laschet to make up for lost ground in the polls.

The debate, which this time was carried out by television channels ARD and ZDF, was much more controversial than the first TV debate two weeks ago.

Laschet attacked Scholz on two fronts: his alleged involvement in large-scale financial scandals during his time as finance minister and his refusal to strictly rule out a coalition with the far-left party Die Linke should he win the elections.

“The citizens don’t want The Left party in the government,” Laschet said in his initial salvo, saying Scholz refused to rule out a coalition with the far-left party Die Linke.

Laschet then pointed to Scholz’s alleged wrongdoings after police raided Scholz’s finance ministry on 9 September over suspicions that officials at the ministry’s sub-Financial Intelligence Unit (FIU) hindered prosecution efforts in the Wirecard and Cum-Ex fraud scandals.

Scholz’s ministry were at least partially involved in the Wirecard financial scandal, said Laschet. And in the Cum-Ex fraud scandal, Hamburg’s finance ministry had failed to request back about €50 million from a bank, which Scholz is alleged to have been involved in.

Scholz retorted that the investigations were “carried out to aid this discovery and that it has nothing to do with the ministries where it took place”. The ministries had “done everything that is necessary on this issue”, he proclaimed.

At one point, Scholz did lose some of his cool, calling the “false accusations” by Laschet “dishonest”.

But is unlikely that Laschet’s attacks found much success with viewers. A snap poll for ARD, made soon after the 90-minute debate, showed that 41% of those asked thought Scholz was the most convincing speaker, compared to 27% for Laschet and 25% for Baerbock.

The Greens candidate Annalena Baerbock, for her part, was hesitant to follow Laschet’s attacks and instead pointed out the abundance of tax evasion and money laundering in Germany, for which she implicitly blamed Scholz’s finance ministry.

On substance however, domestic policy again prevailed. While Laschet and Scholz did their best to project stability, the Greens’ Baerbock called for a departure from 16 years of “business as usual”.

The Greens candidate made it clear that Germany’s climate targets would be missed at the current pace, while Laschet and Scholz both accused each other of blocking important decisions on energy and climate protection.

Baerbock, who sought to position herself as the candidate running of real change, was the only one to espouse a ban on combustion engine vehicles by 2030 to speed up the shift towards electric mobility.

On digital, Laschet pledged to set up a special digital ministry while Baerbock rejected the idea in favour of bringing the topic directly under the responsibility of the future chancellor’s office.

Scholz, who leads in the polls, did his best to display a moderate Merkel-esque style. “The moderate way is the right way,” he said, when asked about the impacts of Germany’s carbon price that came into effect in January 2021 and is set to increase step-by-step.

In an interview with Welt am Sonntag ahead of the debate, SPD candidate Olaf Scholz called for accelerated EU decision-making on financial and foreign policy matters, with decisions to be made by qualified majority “instead of blocking each other with unanimous consent”.

CDU’s Armin Laschet on the other hand, in a Deutschlandfunk interview on the same day, lobbied for more German internal commitment on migration, asking the federal states to accept Afghan refugees.

He also called for a stronger European coordination of security and defence efforts, as well as “more Europe” when it comes to cooperation between intelligence services, with the creation of a common database for terror suspects.