Second round for Poland’s presidential candidates 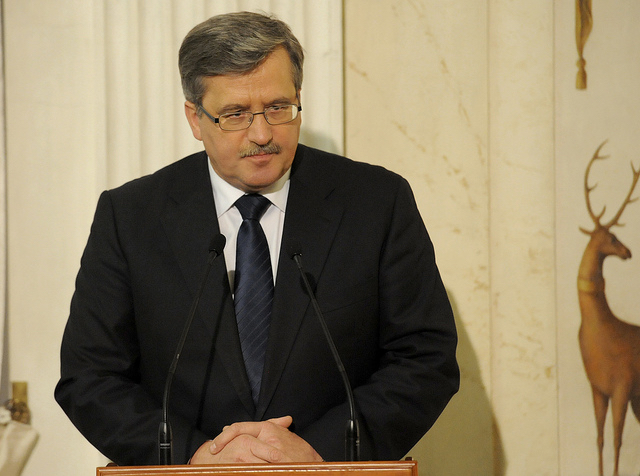 The conservative opposition candidate won the first round in Poland’s presidential election on Sunday (10 May), opening the way for a runoff in two weeks. EURACTIV Poland reports.

Despite opinion polls predicted the ruling president Bronis?aw Komorowski would get a 10% lead, Andrzej Duda from the Law and Justice (PiS) won the most votes in the first round of the poll.

Duda, who is no fan of the European Union, is expected to capture 34.8% of the vote to Komorowski’s 33.1%, according to the Ipsos poll published by the private TVN24 and the state-run PAP news agency.

Among the 11 running candidates, Komorowski’s Civic Platform (PO) electorate showed lower levels of engagement and determination, contrary to the disciplined voters of his major opponents – Andrzej Duda and Pawe? Kukiz.

“The result of the exit poll is a serious warning for the entire team in power,” he said. “We should listen to the voters, because it’s evidently necessary to mobilise all rational forces in Poland.”

His campaign for reelection was rather stiff and mostly devoid of vision focusing – in form and substance – on stabilisation and safety.

On Sunday, he appealed for energy and cooperation with the “large group of voters evidently disillusioned and waiting for fast, much faster change and modernisation”.

Despite Komorowski enjoying extraordinary levels of public trust – over 67% after 5 years in office – he was trumped by the lively campaigns of most of his opponents.

Duda was anointed by the party’s leader Jaros?aw Kaczy?ski, twin-brother of Lech Kaczy?ski who died in the Smole?sk plane crash while in power. Komorowski, then serving as the Speaker of the Sejm (lower chamber of Polish Parliament), took over the acting presidency, and in the subsequent elections won in the second round with Kaczy?ski.

Duda appealed to voters for more support in the presidential runoff. “We want to have a dignified life in a safe Poland, which needs to be mended in many areas,” he said. “Today this primarily means a change at the presidential office. We will win.”

The real dark horse of the Poland’s elections was Pawe? Kukiz, who individually – without any political backing – attracted voters tired of the Polish political establishment, offering a fresh breeze of novelty and change. His result of 20.5% was higher than predicted by opinion polls.

Kukiz is a singer, songwriter, mostly known as a leader to the band Piersi. He closed the electoral campaign one day earlier – on Thursday midnight – as on Friday, a concert of his was planned for the annual university music festival in Rybnik. In the end, the concert was cancelled, officially due to personal reasons (an illness of the candidate’s father).

Kukiz was engaged in the Polish political life for a decade. 10 years ago he supported openly supported Civic Platform. Later he leaned more and more on the right, having also a short flirt with radical nationalists.

The reason for his success’ riddle was his naïve naturalness, spontaneity and simplicity.

With most power in the hands of Poland’s prime minister and government, the president has mostly ceremonial duties, but is the commander-in-chief of the armed forces and has the power to propose and veto legislation.

The runoff election between Andrzej Duda and Bronis?aw Komorowski will take place in two weeks, on 24 May.

Both Komorowski and Duda represent two major Polish parties, in different configurations having been on the frontline of Polish political life since the democratic transformation of 1989. Now the final victory rests on who will be able to attract the votes of those disillusioned with the reality that they have co-created.