‘Sexy beast’ Schulz fires up support ahead of German poll 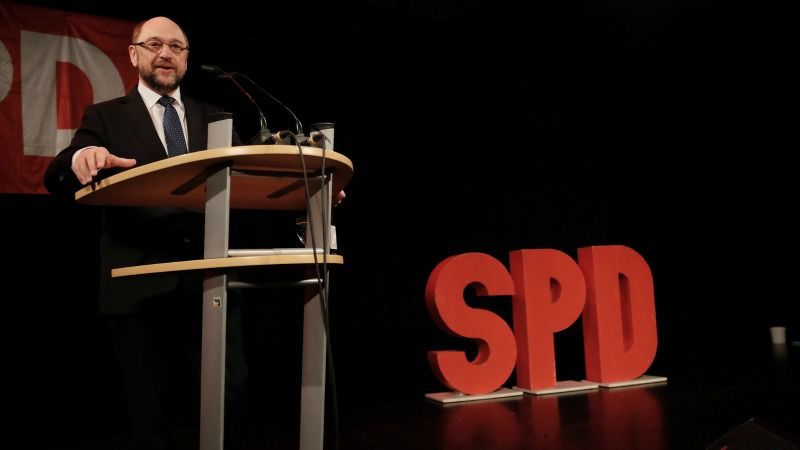 Zeller, who heads the youth wing of SPD’s Mannheim chapter, told AFP that he let slip the informal expression “out of sheer exuberant joy” over Schulz’s decision to lead the party into battle against Chancellor Angela Merkel in September elections.

For him, it also “embodies the enthusiasm of young people, especially in the SPD, for Schulz and the new strength of the party”.

Schulz’s decision to leave the European Parliament, which he headed for five years, and run to lead Germany have, at least in the past few weeks, dramatically turned his party’s fortunes around.

A junior coalition partner of Merkel’s conservative alliance CDU and CSU, the SPD had been languishing in the polls under its former leader Sigmar Gabriel.

But Schulz’s arrival has re-energised support, with opinion surveys recording a 10-percentage point jump and some polls putting it ahead of Merkel’s conservative bloc.

His popularity reaches close to 50%, compared to the chancellor’s 38%.

The enthusiasm for Schulz, a politician who has spent more than two decades in the mega-bureaucracy of Brussels and Strasbourg, may seem odd at a time when an anti-EU populist wave is sweeping the continent.

But his unique life history – he wanted to be a professional footballer, didn’t finish high school, struggled with alcoholism before opening a bookstore and becoming an autodidact with six languages under his belt – gives him a common touch.

“There has been a sort of change in mood, the SPD feels different because it has a new candidate,” said Christopher Lauer, a former member of the Pirate Party who has defected to the SPD.

That new optimism is palpable on social media.

The theme extends to YouTube, where a video called the Schulzzuglied (Schulz train song) features the lyrics, “The Schulz train is rolling, and it has no brakes, it’s running at full steam to the chancellery.”

Such creative output has been shared on online forum subreddit in a thread called The_Schulz, which was started as a parody of The_Donald — a pro-Trump thread.

Some of Schulz’s fans style him as the anti-Trump.

The acronym MEGA, which stands for “Make Europe Great Again”, has been plastered on a Schulz poster that mimics the style of Barack Obama’s “Hope” campaign poster.

As with many social media phenomena, it is hard to pin down who started what, when.

Some members of Jusos Mannheim are active in the subreddit forum, point to Zeller.

But it is clear that the hype was not planned by SPD headquarters.

Yet Zeller underlined the significance of the light-hearted chatter online.

“That is important because in social networks, simple, populist statements penetrate very quickly while the other complicated, correct answers to problems don’t travel so well.

“We are transferring our party’s content to our target group – we want politics to be cool, sexy and human-centred,” he said.

Schulz himself is gamely joining in the fun.

A day after Zeller’s infamous comment on breakfast television, the SPD boss telephoned the young man.

“It was a big surprise,” said Zeller, whose youth group has also posted an online guide on how to make bags featuring the Schulz MEGA poster.

“He gave me a feeling of confidence and appreciation in the phone call. He gets along very well with young people and can relate to the party rank and file.”

Schulz also left a video message thanking his subreddit fans for their support.

That online engagement contrasts sharply with his opponent Merkel, who is one of few world leaders who does not have her own Twitter account.

But Lauer also noted that, as the incumbent leader, “it is impossible to consider something like a ‘Merkel bus'”.

“If Martin Schulz is elected this year as chancellor, then he would certainly not be able to campaign with a ‘Schulz train’ in 2021 because he would be the incumbent,” said Lauer.

He also cautioned against reading too much into the “Internet bubble”.

While these slogans create buzz, they boil down to little content-wise, he said.

“I think all that can fire up young people, but at the end of the day, young people are interested in what kind of perspectives politics or political parties are offering,” he said.

Schulz also seem to be conscious of that, telling the Bild daily in an interview, “I am not a pop star, but a politician … Ultimately, I want to become chancellor.”