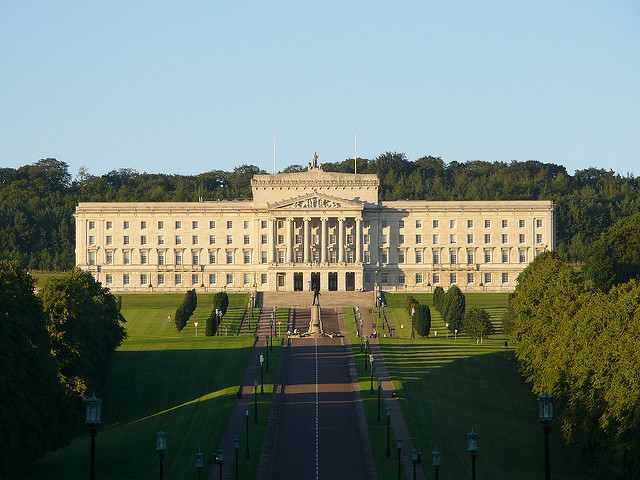 Sinn Fein, which supports a united Ireland, is set to top the poll at next Thursday’s 5 May Northern Ireland Assembly elections, which would see it in line to take the First Minister post in the devolved government for the first time.

Sinn Fein, which supports a united Ireland, is set to top the poll at next Thursday’s (5 May) Northern Ireland Assembly elections, which would see it in line to take the First Minister post in the devolved government for the first time.

An opinion poll by Survation poll on Friday for Good Morning Britain put Sinn Féin on 22.2% of the first preference vote, though their lead over the Democratic Unionist Party, which supports Northern Ireland’s place within the United Kingdom, has dropped to just 2%.

Both parties are set to register a significant drop in support compared to the 2017 assembly elections, with the Alliance party, which is neither Unionist nor Irish Nationalist, set to obtain a 5% bump in support to 14.1% of first preference votes that would put it in third place

The moderate Ulster Unionist Party and Social Democrat and Labour party, which also support a united Ireland, sit on 10.9% and 13.3% respectively.

The DUP, the dominant force in Northern Irish politics for the last twenty years, has been damaged by the longrunning impasse over the Northern Ireland protocol, which it wants to scrap, and infighting that has seen it go through three party leaders in a year.

Sinn Fein, meanwhile, is currently the most popular party in both Northern Ireland and the Republic of Ireland, and has benefited from increasing calls for a referendum on Irish unity following the UK’s exit from the European Union.

Little progress has been made in resolving the dispute over the protocol, which introduced customs checks on goods being exported from Britain to the island of Ireland following Brexit. The UK’s Minister for Europe, James Cleverly, told UK lawmakers in London on Thursday that months of talks with EU officials have delivered little.

“We have come to something of an impasse, and I don’t think that’s through a lack of goodwill, and I think it’s more through what we regard in the UK as an overly limited (EU) negotiating mandate,” he said.

The dispute over the protocol – which the UK agreed with the EU as part of its exit from the bloc but now says has become unworkable because it is disruptive for businesses in Northern Ireland and undermines its place within the UK – is likely to increase the difficulties of forming a government in Belfast following the 5 May polls.

DUP leader Jeffrey Donaldson has this week insisted again that the protocol must be replaced, warning that a new government in Northern Ireland will not be formed until the dispute is resolved.

Under the terms of the Good Friday Agreement, which has delivered peace in Northern Ireland since 1998, the devolved government in Belfast must be led by the leading parties on either side of the sectarian divide.