File photo. Spanish Prime Minister Pedro Sanchez intervenes in a Parliamentary session at the Lower House in Madrid, Spain, to inform about the two last EU Councils and the current situation of the coronavirus pandemic in Spain, 16 December 2020. [EPA-EFE/J.J. Guillén]

The spending plan, which channels billions of euros in European Union pandemic recovery funds into the economy, was approved by the lower house on 3 December before receiving the Senate’s backing.

Its passage increases the chances that Sánchez will hold on to power until the next general election set for 2023.

It became the first budget to be approved since 2018.

The rise of new parties such as far-left Podemos and market-friendly Ciudadanos has fractured parliament, making it difficult to pass legislation.

This has led to a cycle of political instability that has taken Spain, the euro zone’s fourth largest economy, to four elections between 2015 and 2019.

“This is a very, very important stage because it allows Pedro Sánchez to gain time and stability,” said Oriol Bartomeus, a political scientist at the Autonomous University of Barcelona.

Sánchez came to power in June 2018 but was forced to call fresh elections early last year after Catalan separatist parties voted down his draft budget.

The budget vote came on the heels of the start of a high-profile trial of Catalan separatist leaders over Catalonia’s failed 2017 bid to break away from Spain.

“Sánchez has shown throughout his career that he never admits defeat,” said Paloma Roman, politics professor at Madrid’s Complutense University.

After two inconclusive general elections in 2019, Sánchez in January 2020 formed a minority coalition government with Podemos. 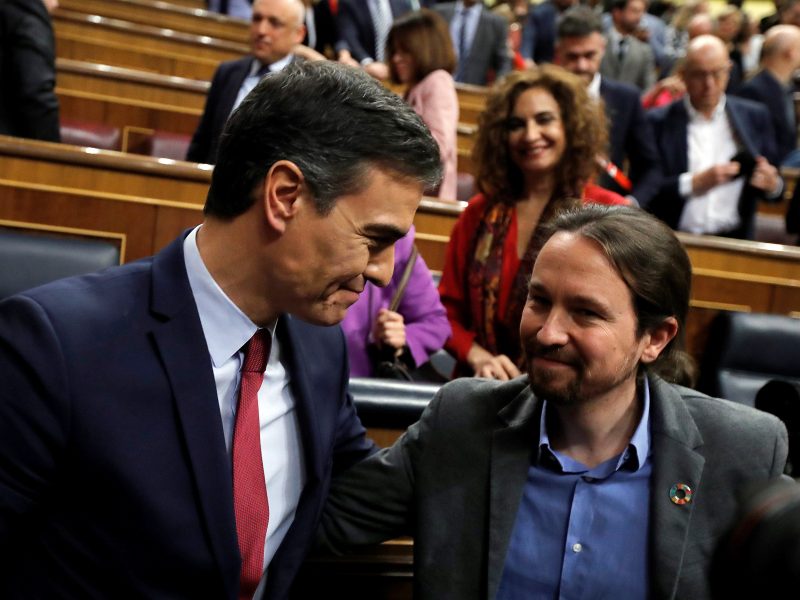 Allied with far-left, Spain's Sanchez stays on as PM

Spain’s parliament on Tuesday (7 January) narrowly confirmed Socialist leader Pedro Sánchez as premier for another term, paving the way for the country’s first-ever coalition government since its return to democracy in the 1970s.

He initially tried to win support for his 2021 budget from Ciudadanos.

But after that failed, he controversially turned to several smaller regional nationalist parties, including Bildu, the heirs of the former political wing of armed Basque separatist group ETA.

Sánchez took office in 2018 with the backing of these parties, but the pact with Bildu sparked an outcry from the right and even criticism from within his Socialist party.

Given the make-up of parliament, “there was no other possible majority” to help pass the budget, said Bartomeus.

In exchange for the support of these parties for his budget, Sánchez agreed a series of measures, including a moratorium on evictions for poor families which cabinet is set to approve on Tuesday.

While approval of the budget ensures Sánchez’s government will last, he still faces “years of permanent negotiations within his government and in parliament” to approve laws, said Cristina Monge, a political scientist at the University of Zaragoza.

The Socialists and Podemos, their junior coalition partners, are divided over many issues such as migration, the future of the monarchy and the need to raise the minimum wage.

“It will not be easy for the government to resist these tensions, but neither of the two (coalition partners) has any real interest in separating” and bringing down the government, said Bartomeus.

Monge said Podemos is falling in the polls and the Socialists do not have enough support to govern alone so the “price they would pay” if they split would be “too high”.