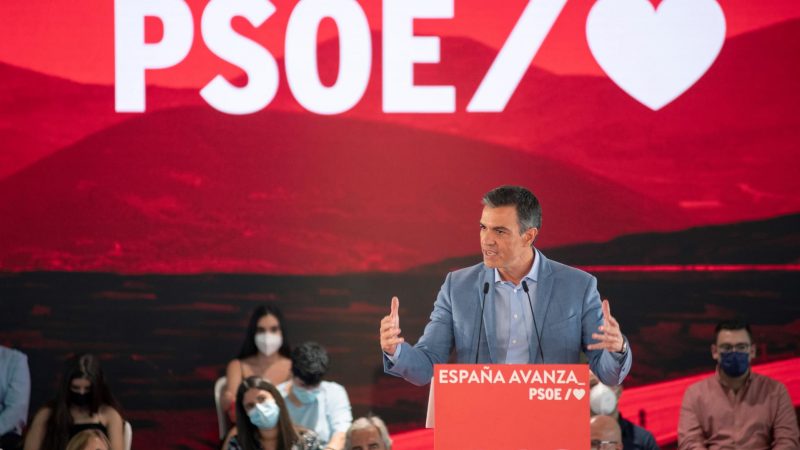 Pedro Sánchez’s PSOE would barely obtain 24.4% of the votes in the election, which is the lowest estimate since Spain’s socialist PM is leading the government, according to the latest Sigma Dos poll for El Mundo.  [EFE/José Manuel Pedrosa]

If new elections were held today, Spain’s Socialist Party (PSOE) would fall below the mark of 100 seats in the parliament, likely leaving the executive in the hands of the centre-right Popular Party (PP), according to a fresh poll published on Monday by El Mundo, EURACTIV’s partner EFE reported.

Pablo Casado’s PP and far-right VOX would obtain together 178 of 350 seats – enough to govern as the absolute majority is set at 176, the poll shows. The next general election in Spain will be held at the end of 2023, and in any case no later than 10 December of that year.

Pedro Sánchez’s PSOE would barely obtain 24.4% of the votes in the election, which is the lowest estimate since Spain’s socialist PM is leading the government, according to the latest Sigma Dos poll for El Mundo.

This result – if confirmed- would translate into 98 MPs for the PSOE, insufficient for Sánchez to remain head of the coalition Executive, which was forged in December 2019 by the PSOE and left-wing Unidas-Podemos (United We Can).

‘Historic’ increase of the electricity price

Behind this negative perspective for the PSOE are different political crises that the government had to face in recent weeks, such as a “historic” increase in the price of electricity. A full 84.2% of Spaniards say the government has not done enough to alleviate the impact of the energy rise on households, according to the poll.

In addition, the poll shows that support for a new left-wing coalition of PSOE-Unidas Podemos would not be enough to govern if elections were held today, not even with the support of PSOE’s left-wing allies.