Protestors posing as construction workers outside the building in Sofia hosting the services of EU institutions, 31 August 2020. [Yulia Lazarova/Dnevnik]

Thousands of Bulgarians have been calling every day in the streets on Borissov and Geshev to resign over rampant high-level corruption that has weakened state institutions and benefited powerful tycoons. Geshev, is widely considered as biased and unfit for the job.

“This is a protest with many symbols and you can see our banners. We are impersonating construction workers who have stopped work over the EU programme “Façade democracy”, Pavel, one of the protesters, explained to bTV channel.

“This means the EU as our partner, and also ourselves, we should open our eyes about all the lies around us and about the true nature of democracy in Bulgaria”, he told the channel.

A majority of the Bulgarians support the protests. The same can be said about the EU. But many Bulgarians consider that the EU money is used mostly to fill the pockets of those in power and that it doesn’t fulfil its main task: to create cohesion and benefit those in need.

Lately, every day protestors have targeted one of the country’s institutions. This time, it was the building hosting the EU services in Bulgaria.

“We have targeted this protest with a European angle, to get a media effect and a reaction”,  Pavel said.

One of the banners of the protest read “Operative Programme ‘Façade democracy steels your future’. Its beneficiaries GERB and its coalition parties”. GERB is Borissov’s ruling party (EPP) and its junior coalition partner is the United Patriots, consisting of far-right populists.

But the highlight of the 54th day of protests came from the mainly ethnic Turkish Movement of Rights and Freedoms (DPS) which announced that it would not support Borissov’s initiative to trigger a process of launching a new constitution. 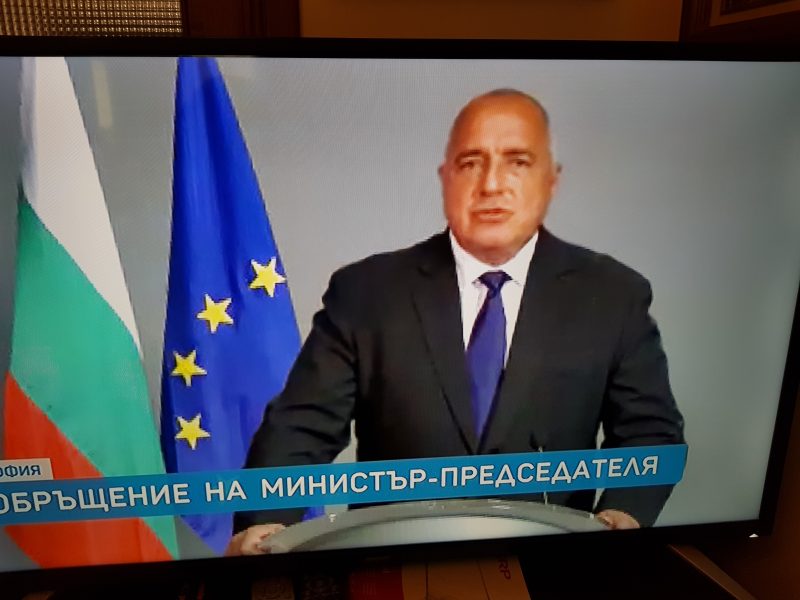 According to an opinion poll on Monday, a majority of Bulgarians believe that Bulgaria does not need a new constitution and that Borissov has made this move only to buy time and avoid having to resign before the general elections next spring.

DPS (Renew) party are officially in opposition but maintain a cosy relation with Borissov’s GERB. Their decision was a bombshell and prompted the leaders of the protests to say that from this moment, Borissov has no choice but to resign.

Indeed, Borissov needed the DPS votes to trigger the process of launching a new constitution, as a majority of 180 MPs out of 240 is required. Borissov and his allies control a little over half of the 240 MPs.

The opposition has called for a bigger than usual protest on Tuesday.